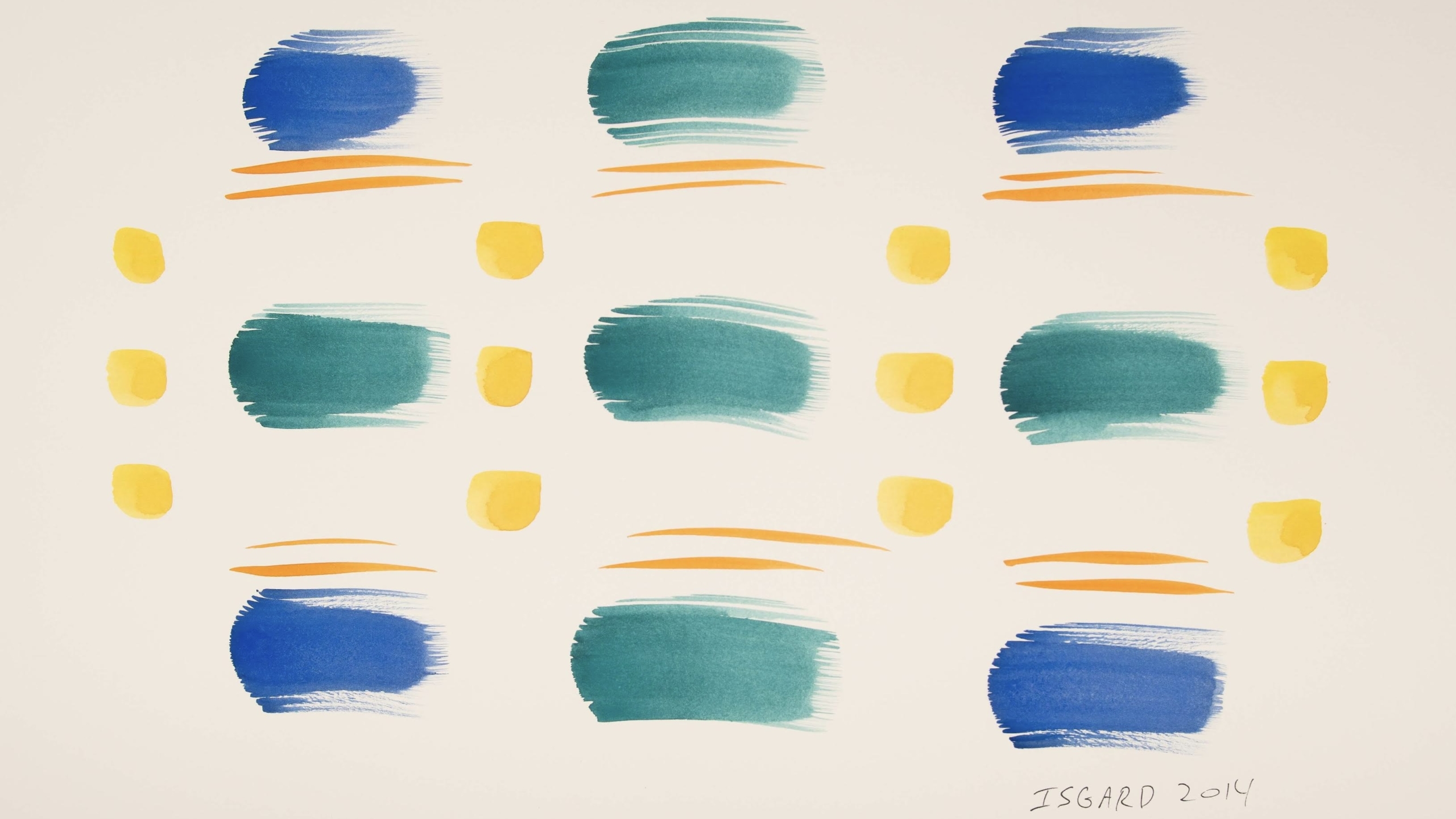 Just a few weeks ago, painter M. Dreeland met the grey of January with a torrent of color: all hues bright and swirling, bunching up, colliding, saturating the viewer’s field of vision, generating dizzy excitement. “Color Continues,” his show at the Hamilton Square Condominiums, is a chorus of pigment, with loud and boisterous voices pouring from the frame in defiance of the season. Ten minutes west, a different kind of artist has turned his own paintbrush, and his own box of colors, against the monochrome winter days. Richard Isgard is as sensitive to the expressive power of color as Dreeland is, even if he’s considerably less rambunctious. In his elegant pieces, color is a conversation, even, polite, measured, and rhythmic, with meaningful pauses, and more than a few prompts left unanswered.

This is not to say that “Richard Isgard — A Solo Exhibition,” on view at Outlander Gallery (126 Monticello) until January 31, lacks energy. On the contrary. The show, which is curated by the artist himself, has the quiet intensity of a stage play where the actors don’t raise their voices, but where every line signifies. Isgard’s most impressive works are done in gouache, that gentle middle-medium between acrylic and watercolor, and he takes full advantage of the whispering quality of the paint and its peculiar opacity, too. Sometimes, he’s content with a few small fields of color against a white background; in others, he’ll juxtapose rectangles of primary color against dots and lines of other colors; sometimes he’ll blend colors delicately, in what seems to be mid-stroke, to achieve the effect evocative of a flower-petal, or a silvery fish, or a dancing flame. The brook of his creativity is crystal clear and slow-moving, and there’s lots of life in these eddies.

These pieces are as eloquent and comprehensible as Dreeland’s are bewildering and destabilizing. It wouldn’t be too misleading to call them bite-sized.  Yet Isgard’s is not a minimalist — not quite, anyway. What makes the gouaches work as well as they do is the amount of variation they contain, and the subtle sense of motion that that variation generates.  Yes, he might give us thirty-two thumb-sized yellow rectangles punctuated by blue dashes and red dots. But each rectangle in the grid is a little different, and each stroke suggests a slightly altered expression of attitude. It’s a bit like watching a mood change: subtly, with incremental alterations, unnoticeable to those who aren’t paying attention, but unmissable for those who are.

The colorful gouaches align Isgard with the “Slow Art” movement showcased at Village West Gallery in 2019: art that doesn’t necessarily demand concentration, but rewards it when it’s given. The rest of “Richard Isgard — A Solo Exhibition” isn’t dissimilar, but isn’t as successful, either. The artist presents poised still life images, and a series of black and white, faceless human-like figures in motion. These canvases and pieces are all winsome, but they lack the sense of completion that the gouaches attain. Nevertheless, there’s a singleness of purpose (and no-b.s. crispness) visible in all of Isgard’s paintings that is quietly pleasing to encounter. This is a painter with his ideas and rhythms sorted out, and his visual and chromatic language in place, and when he wants to make a succinct statement, you’ll get it.

Sometimes, “Richard Isgard — A Solo Exhibition” feels more than a bit like the last fine show at Outlander Gallery. Valerie Huhn festooned her works with brightly-colored fingerprints, and made everything feel like a cross between a sinister Seurat, a police blotter, and a burst of confetti. Isgard’s gouaches, even those that feel like a real-time record of his emotional perturbations, are nowhere near as discontent as hers, but they share an interest in meticulous control over minute dabs and blotches color. And like Huhn, Isgard is understated: all of the works in this lovely, approachable, human-scale show are untitled and hung with an emphasis on harmony and subtle interplay between the pieces.

Is the artist a shy sort, or is he just laconic? You’ll have an opportunity to find out for yourself at 2 p.m. on Saturday, January 22: Richard Isgard will be at Outlander for a talk, hosted, in a strongly positive sign for Jersey City arts, by the productive troublemakers of Eonta Space. Eonta, alas, has been closed for the balance of the pandemic. Because I’m an optimist, I’m taking this as an indication that they’re about to get back into action.  Should they reopen, they’ll provide the fourth of four pillars of of local independent art, each one roughly equidistant from McGinley Square — SMUSH on Summit, Outlander amidst the new development on Monticello, Eonta tucked down an alley on DeKalb, and Deep Space Gallery in the shadow of the Beacon on Cornelison. Even if they don’t, their involvement is a further sign that the locus of creativity continues to shift Downtown to the renascent neighborhoods west of Grand.