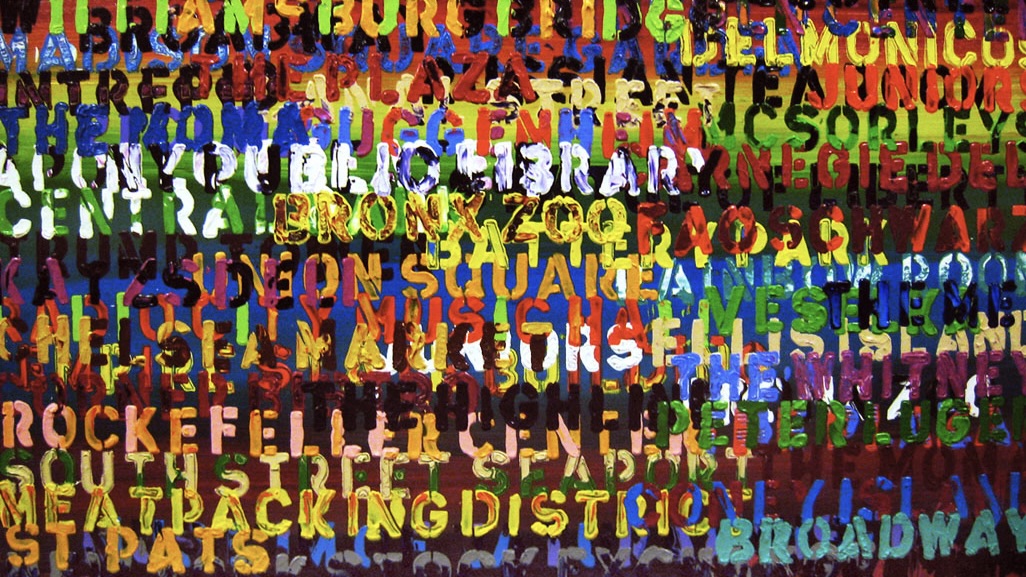 The first floor of the Hamilton Square Condominiums (232 Pavonia at Hamilton Square Park) has become one of the most reliably accessible art exhibition spaces in Jersey City. If it’s business hours and you’ve got your mask on, you can walk right in and check out the show. Silverman, the rare local property developer with a genuine interest in aesthetics, hired Kristin DeAngelis to keep Hamilton Square and a sister property, Majestic Condominiums, filled with interesting things to look at. She used to run an art space of her own: the modest but adventurous 107 Bowers near Central Avenue in the Heights. All year round, DeAngelis manages to make Hamilton Square and Majestic resemble an art gallery.

But a gallery it is not. The ground level of the Hamilton Square Condominiums is a passing-through zone, a gateway to a place where people live. That means mailboxes, and door people, and Christmas trees partially occluding some of the sightlines, and lots of residents walking in and out who aren’t necessarily there to stop and stare at paintings. The image-driven storytelling that a curator can do in a dedicated space isn’t easily available to DeAngelis. At past shows, she’s acted in defiance of the inherent limitations of the space, mounting shows that advance arguments about who we are as urbanites, and make their emotional trajectories manifest — just as she would if she had her audience’s undivided attention. For the first four months of 2022, she’s playing things differently. “Color Continues” by New York City artist M. Dreeland (on view until Apr. 30) is the first Hamilton Square show that feels like an exhibition of the sort of art one might encounter in a lobby.

That’s not a knock. Dreeland is a fine painter with a firm sense of balance, an eye for arresting hue, and a knack for knotty texture. DeAngelis notes that Dreeland is the rare visual artist who doesn’t mind if you touch his work — and his thick curlicues of pigment and tin ceiling-like patterns of acrylic do call out for tactile exploration. The collisions of color on his canvases are exciting when you square up to them: he’s the kind of artist who charges to the edges of the frame and ceases setting his colors aswirl only because he’s run out of room. He transitions riotously from shade to shade, smothers Pop Art-inspired prints of milk cartons and paisley patterns with paint and drops color-saturated nests of string over the tops of his pieces. It’s all flamboyant, simultaneously cheerful and stormy, and designed to cut through the gloom of January and, perhaps, reinvigorate a worker coming home to Hamilton Square in a rainstorm after a long day.

Yet for works that are intentionally loud, they slip into the ambience of their surroundings without much resistance. Many of Dreeland’s images feel largely decorative: studies in the interplay between color and material, a riff on traditions, an infusion of energy to a pair of styles (abstraction and Pop Art) that have grown stark and monochrome. Some illustrate the pleasing quality of ombré, and others highlight how a painter can conjure a chaotic mood by mixing colors violently and complicating cheerful yellows and pinks with darker pigments. Yet they do not take a passerby by the wrist, spin her around, and make a point about the body under pressure, or about the changing perceptions of Hudson County, or aesthetics, or art history. They allow you to appreciate them the way you might appreciate an acquaintance on the street who you admire, but who you don’t stop to talk to. They feel suited for a space which, pretty as it is, is not a destination in itself, but a conduit to other destinations.

Appropriately, then, the best pieces in “Color Continues” are clustered around the door. These all sing in a similar pitch, but sing they do. They bring out M. Dreeland as a forward-looking alchemist of objects and shades — one with an irreverent attitude toward the Pop Art signifiers he’s enthusiastically painting over. With a hash of cris-crossed string in the upper left corner and stripes covered with Dreeland’s trademark milk carton in the rest of the piece, one of these resembles an American Flag for a looser, froot-loopier, pastel-minded nation. The most puzzling piece is in the back. On one large panel, Dreeland has stenciled a roll call of tourist destinations in New York City: The Bronx Zoo, Junior’s, FAO Schwarz, the Chrysler Building, many others. The crowding of the place names does connote bustle, and activity, and maybe even excitement.  But by drawing no distinctions between the names and presenting them all as if they’re equivalent, he’s giving us New York as it most certainly isn’t. New York, as we in Jersey know better than anybody, is a city of hierarchies, and associations, and traceable paths, and constant jockeying for supremacy. This is New York as a first-time tourist might apprehend it, and the piece, striking as it is, plays like a souvenir.

“Color Continues” is the first show mounted by Kristin DeAngelis since her success as one of the prime movers behind Art Fair 14C. The Juried Show at 14C was busy with work by artists who, in classic Jersey style, were determined to communicate something very specific. If she wants to step back from that urgency and intensity and give us something a little more lobby-like, it’s not hard to understand why. It’s a credit to the owners of that lobby that they’ve always been willing to let DeAngelis do what she wanted with their residential space. The Silvermans aren’t alone in their faith in us. One of the most interesting autumn art shows in Jersey City was hosted by Art House curator Andrea McKenna at an open house hosted by realtors Sawyer Smith. Shuster Management enlisted Drawing Rooms to decorate the landings of the Dvora Condominiums with work from some of the most respected artists in town.

I’ve often written about the too-cozy relationship between Jersey City real estate and visual arts, but it’s with no sarcasm whatsoever that I say that the enthusiasm and patronage are net positives, especially for artists looking for places to display their work. I’m glad they’ve turned their landings over to the aesthetes. There’s no substitute for the real thing, though: actual galleries. Here’s hoping we get a few more of those in 2022.