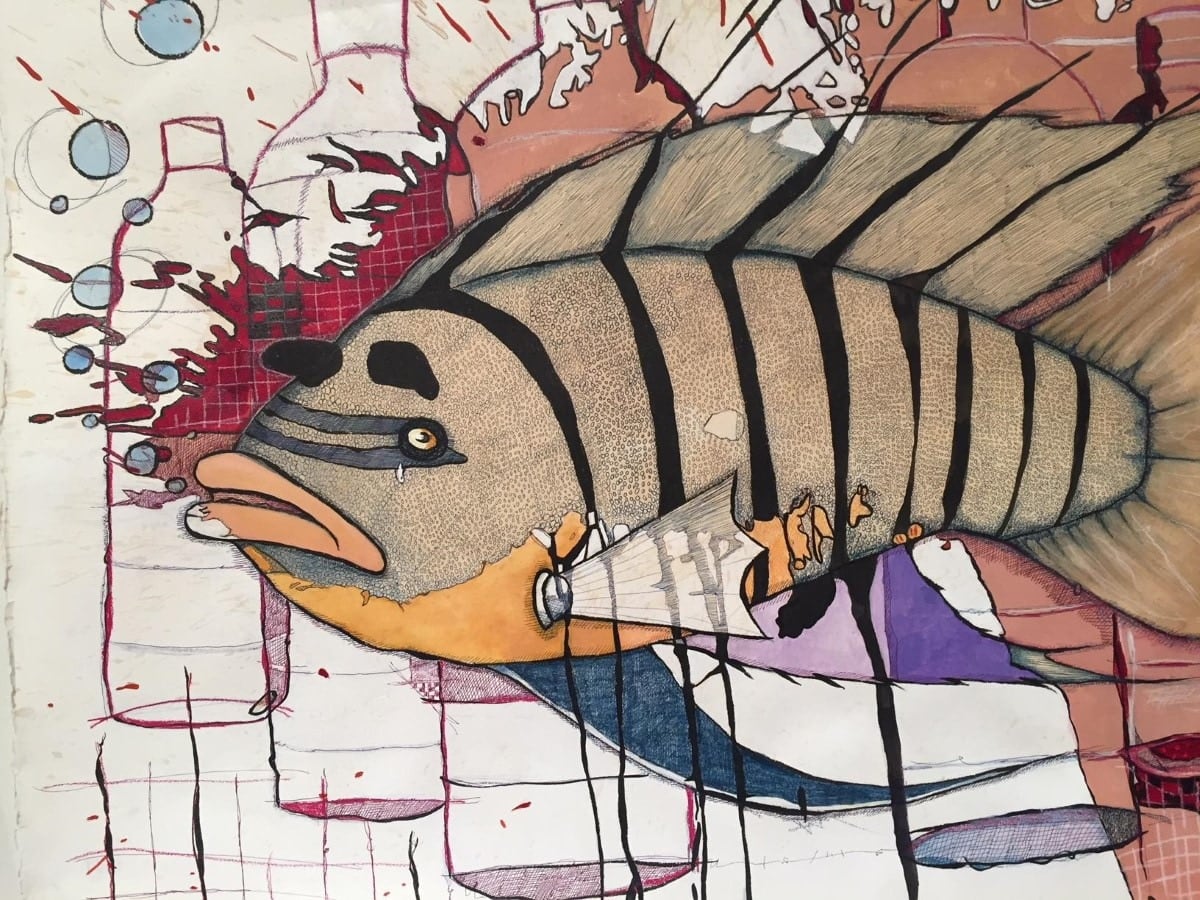 It’s difficult to be a human being on a planet in ecological distress. It’s far tougher to be anything else. Plants and animals have been hit hard by the Holocene—they’ve suffered from widespread habitat degradation and general disrespect from the dominant species (us). Some scientists argue that we humans have driven the biosphere into its sixth global extinction event. Others say we’re merely cutting a swath of unprecedented devastation. All agree: It’s bad out there.

Exterior conditions eventually seep into our interior worlds. Most thoughtful human beings are haunted by what we’re doing and how we’re living, and artists, for whom sensitivity is part of the calling, are particularly susceptible to guilt feelings. Yet expressing those reservations about our poor stewardship of the planet is a challenge. If an artist’s commentary is too subtle, she risks soft-pedaling something that demands immediate action. If her commentary is too blatant, she risks coming off as a scold.

An existential crisis requires an aesthetic response more forceful than the creeping unease present in many modern gallery shows. In a moment as fraught as the one we inhabit, we shouldn’t be put off by a firm guiding hand or even a wagging finger. “Commit to Memory: The Precipice of Extinction,” an arresting two-artist show that opens at Eonta Space (34 DeKalb Ave., eontaspacenj.com) at 6 p.m. tonight and runs through the end of March, makes a passionate case for the animals.  It can be blunt.  At times, it’s downright angry.  But it’s never less than articulate, and if it prompts viewers to chuck fewer bottles into the ocean, it’s wall space well used.

Not that all of it is on the walls. Some of the pieces in the show hang on a gauzy black curtain—a veil, really—that cuts Eonta Space in half. The rest of the gallery is inhabited by Cheryl Gross’s creatures drawn on paper in bright, lurid colors. Almost all of them are single images of animals that are either extinct or endangered.  A few of these tributes to the beasts in the crosshairs have been framed. Others feel like they were torn from the sketchbook and hung in the raw, which imparts some added urgency to a show that already rings like an alarm clock. Some of this work was indeed recently completed: A multi-panel image of an owl, its white wings fluttering across a hot yellow background, bears a 2020 date. Gross is feeling the press of time. She expects you to feel it, too.

Those familiar with the artist might remember prior work that possessed the fantastic quality of storybook illustrations. These drawings aren’t dissimilar: Her animals are patchworks of colors and textures, and the scenes they inhabit often contain splatters of ink, frantic crosshatches, waves and dots that reveal a world untethered and in motion. Yet the whimsy associated with Gross’s prior pictures isn’t always present. Instead, there’s peril, and unwelcome restraint—frogs hemmed in by black lines that bunch and scratch like barbed wire, red ink that drips suggestively over the determined face of a tortoise, a penguin with a bullseye in its belly. A flying squirrel, soaring from a blue sky into a nebulous field of gray, appears to be coming apart. Others blend in as best as they can, but camouflage isn’t easy to find. Many of the animals bump against the limits of the page, their  presence too large for the paper to contain—goldfish that have outgrown their tiny bowls to which they’ve been consigned by humans. The message is clear: There’s nowhere to hide.

To her credit, Gross resists the urge to anthropomorphize her beasts. She’s preserved their alterity and with it their dignity. The artist demands that the viewer confront these animals in all their animality and see them as creatures with the same right to inhabit the planet that humans have. The violence of habitat loss is not always left implicit. One fish is trapped in a bottle like a mariner’s model of a ship, while another confronts a row of plastic containers (and another blood-red splatter) with a look of extreme agitation. This sort of literalism would swamp an artist with lesser skills. But her experience handling fantasy material helps her out—she’s able to draw an allegory with a point so fine that you don’t mind cutting your fingers on it.

Gross supplements the drawings with a fifteen-minute animated film that features some of the same characters you’ll recognize from the walls. That penguin, for instance, has a starring role, although notably she’s given a near-human personality and a near-human set of concerns. This elicits sympathy for the character, but it doesn’t address the viewer with the same straightforward, impersonal honestly that the drawings do. 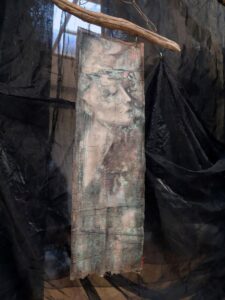 A better counterpoint to Gross’s images of animals is provided by a series of devastated paintings by Andrea McKenna, who is also the curator of the gallery at Art House Productions. These hang like scrolls from rough wooden rods affixed to both sides of the black curtain in the middle of the gallery.  Each image is of a single spectral human figure whose face and body is dissolving into the gloom that surrounds her. Some of the paintings are so distressed that they’re practically translucent—like a threadbare coat that’s no longer up to the task of stopping the wind. Gross’s color palette runs marvelously, unreasonably hot; McKenna works in steel gray, rust red, and institution blue. Gross’s work speaks of a fiery, vivid present where the animals are in peril. McKenna’s paintings whisper of a cold future after the animals are gone.

Both artists do have their antecedents in the canon. McKenna’s images, for instance, echo the modern dislocation and emotional fraying that Francis Bacon captures in his canvases. Nevertheless, their styles remind me more of pop-album art than museum art, and as a huge appreciator of record sleeves and covers, I don’t mean that as an insult. McKenna’s scraped and slathered paint and ghostly figures are evocative of industrial music and the art that surrounds it—images from the catalog of Nine Inch Nails and Ministry, and similar groups. Likewise, the furiously colored animals in Gross’s drawings bear more than a passing resemblance to the menagerie of Roger Dean, the imaginary-landscape artist who designed the covers to many of the classic Yes sets of the 1970s. Yes was one of the first rock groups to take environmental threats seriously, and Dean’s images, fragile and fantastic as they are, are visual analogues of lyrics about a world spiraling close to the edge. Yes’s message was timely then, just as Eonta Space’s message is timely now. But eventually, time runs out. 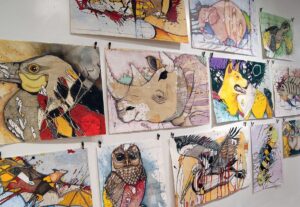 Is Jersey City Due for Another Reval Already? A Taxpayer’s Guide to the...
Scroll to top