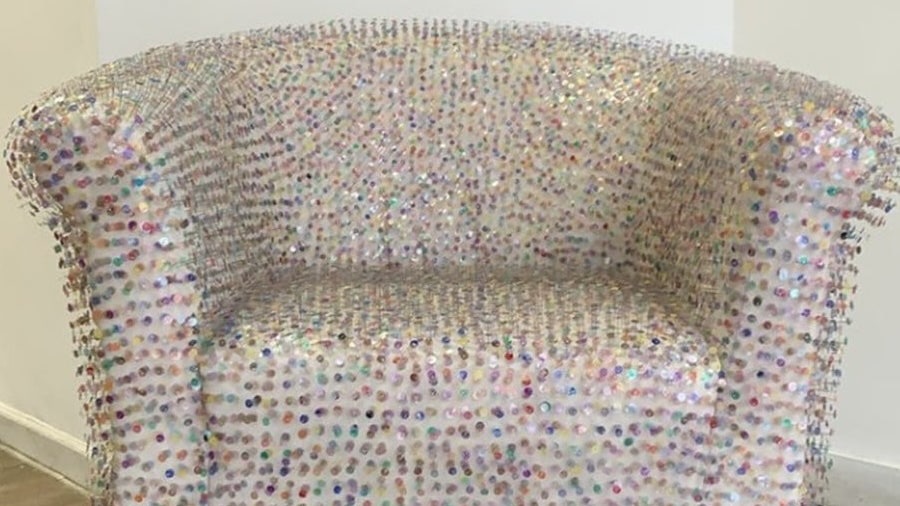 There are few things more personal than a fingerprint. The ten at your command are unlike any others in the world. Chances are, though, you associate fingerprints with cops, and crime scene investigation, rather than the miracle of human individuality. In the popular imagination, the fingerprint is the property of law enforcement. The police capture of the fingerprint — this wondrous biological marker of irreducible personality — is one of the more regrettable accomplishments of the surveillance state.

Flemington artist Valerie Huhn thinks hard about fingerprints. Her work denaturalizes the fingerprint, liberates it from our expectations, and reminds us of our unique genetic signature. At the same time, she draws on the troubling associations that fingerprints have accumulated: policing, bureaucracy, the gathering of evidence, and the overwhelming, unpleasant sense that we’re leaving detectable traces of ourselves wherever we go.

Her prickly, unsettling work has sent a cold shiver through recent group shows in the Garden State over the past eighteen months, including the inaugural Art150 event and the 2021 Members Exhibition at the Hunterdon Art Museum in Clinton.  She’ll have a booth at the Art Fair 14C next week, too.  But the best way to understand Huhn’s message is full immersion, and The Outlander Gallery (126 Monticello Ave.) is providing exactly that. They’re dedicating more than half of their space to “What Remains,” a show that presents Valerie Huhn as a riddler, a fierce guardian of human oddness, and, above all, a woman who bristles at invasive authority and oppressive oversight. 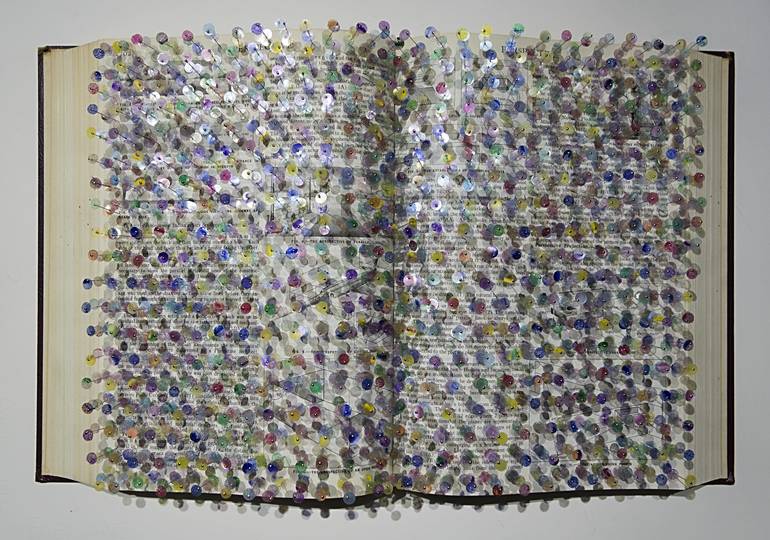 “What Remains” is a demonstration of the main things Huhn does with prints, or print-size blobs of brightly colored paint. There’s a framed grid of small tiles, each about the size of a finger, each one with a print captured at its center. At a distance, the effect is decorative, like a handsome mosaic; closer up, it’s a chorus of whorls, arches, and parallel curves, and suddenly, it isn’t so innocuous. Alongside the beauty and the lovely texture of the work, it radiates a fair bit of anxiety.  It could be an impression left on a wall by a variety of passersby — or we could be looking at the fingers of somebody on the inside, eager to get out. More immediately impressive are Huhn’s large murals on paper — hundreds upon hundreds of marble-swirled, finger-pressed dots, accompanied by scrawls in black ink. It feels like a classification system, or a doctor’s diagnostic chart, or a tapestry of surveillance.

But as striking as these works are, they’re not the reason that Valerie Huhn has attracted so much attention lately. Huhn is best known for her fingerprint tacks, which bring a near-supernatural “Hellraiser” shudder to everything she applies them to.  The artist dips her fingers in colored paint (never black), presses them against acetate, pops out the centers of the impressions with a hole punch, and then attaches each one to a pin.  She then drives these flashy little needles into the surfaces of everyday objects: shoes, a lamp, a chair, and especially open books.  She punctures obsessively, affixing these print-tacks by the score, until the objects she’s penetrating take on double existence — there’s the substrate, the original object, mundane and inert, and there’s a parallel layer of brightly colored fingerprints, signifying human use or occupation, traces of the object’s interaction with our lives.  They could have been placed there by a detective scouring for clues, or an entomologist observing a butterfly, or a geopositioner, logging coordinates into a vast, granular database.

Because the acetate is translucent, and the paint is so bright, Huhn’s pin-sculptures produce some gently bewildering optical effects.  Regardless of the position of the source of light, the shadows cast by the pins crisscross the surfaces of the objects beneath in a hash of sharply angled lines.  The pin-heads, too, form a scatterplot: sometimes the circles overlap, and sometimes they seem to be drifting apart, out into open space.  Tacks by the hundreds give a dull business suit on a headless mannequin more gravity, and more color, than it has, and perhaps deserves.  An upholstered chair, too, gets the same treatment.  Where once it would be unremarkable and comfortable, Huhn’s treatment renders it spectacular, and thoroughly un-sittable.

Huhn’s meticulous, energetic, near-obsessive reinvigoration of ordinary objects might remind you of another lively but unsettling artist: Yayoi Kusama. Like Huhn, Kusama festoons the surfaces of couches and articles of clothing with decorations that seem to contrast sharply with the quotidian tone of the original objects.  But Kusama’s polka-dotted and tentacled universe oftean feels like an expression of a psyche turned sharply inward: a peculiar way of seeing that, externalized, transforms mundane landscapes into eerie wonderlands.  Huhn’s work feels just as personal, but far more outwardly engaged. She’s present to the marks we leave on the things we use and places we go — and she’s conscious of the ways in which authorities use the biological record we generate to pin us in place.

Hers is work that speaks in code, but it’s never an impenetrable one.  She has every confidence that you’ll figure it out, if you care to.

The artist reception for “What Remains” will be held at Outlander Gallery (126 Monticello Ave.) on Sunday, Nov. 14, from 4 to 7 p.m.  Visit https://www.facebook.com/OutlanderArtGallery/ or www.valeriehuhn.com for more information.