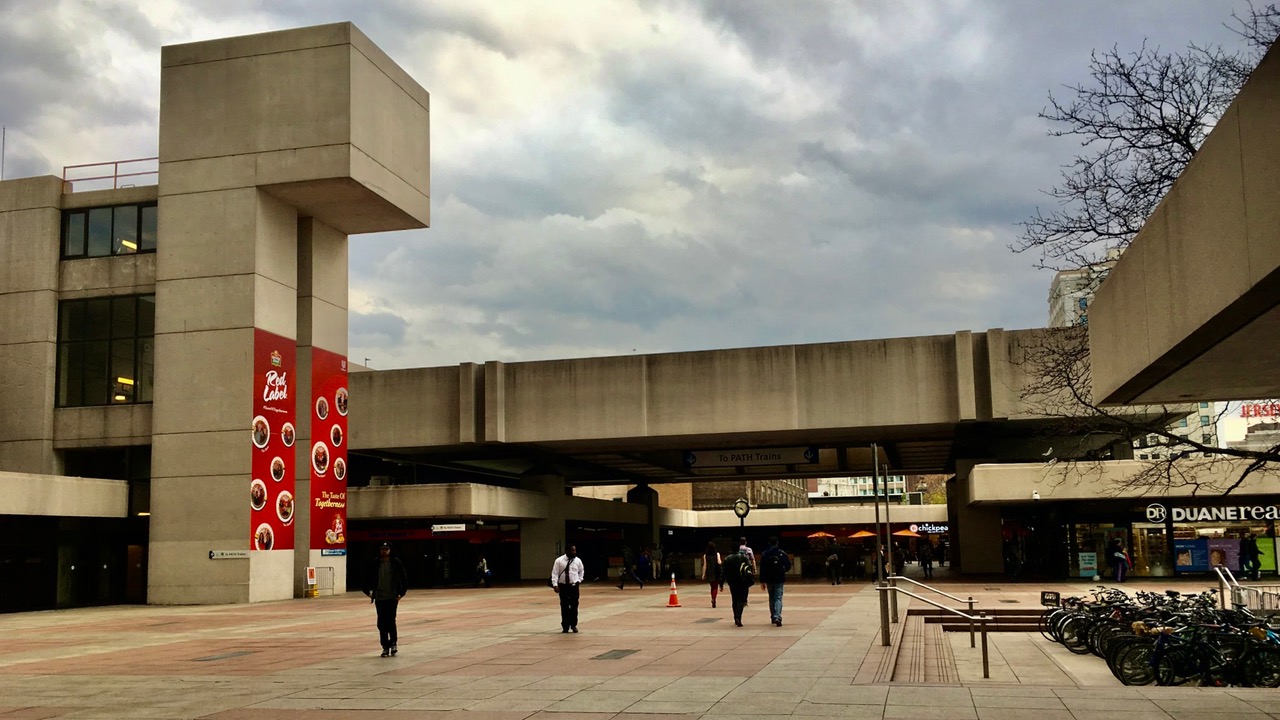 It was mid-February cold on the concourse at Journal Square station. For the third time in a week, I was stuck outside the Commuter Gallery, across the concrete expanse from the Starbucks, right by the stairs leading down to the trains. The glass walls of the Gallery were decorated with the artist’s graffiti tag: 4SAKN, in white and yellow.  It occurred to me that if the tag had appeared on the station walls a few yards south, or on the floor outside the art space, that would have been considered a crime.

But the art was where the authorities wanted it: contained within a small box in a particularly charmless corner of the Jersey City transit network. I wanted to get inside that box. I could not. Every time I tried to visit the Commuter Gallery during the hours it was supposed to be open, the lights were off.

I had good reasons to believe I’d enjoy this show. I’ve admired 4SAKN’s work before — although rarely indoors. If you know where to look, his spray-paintings are on display all over town. 4SAKN is skilled at wildstyle graffiti: enormous tags with interlocking block letters, lines like thrown elbows, machinery-thick, a nest of characters, arrows and angles, suggesting three dimensions, stubbornly illegible to those who aren’t in the know. Wildstyle is the pinnacle of graffiti tagging, and 4SAKN is a practiced hand at it. Those serrated-edge characters and bold diagonal strokes of his — letters that seem to explode outward from an imaginary median line, right at eye level — have lit up concrete walls on warehouses all over Jersey City.

4SAKN also showed two smaller pieces in the best local art exhibition of 2021: “Walls To Smalls II” at Deep Space Gallery. That show was an attempt to transfer the energy of unauthorized street art to a liminal space, and it succeeded brilliantly; 4SAKN’s canvases, smothered in bright spray paint, did indeed pulsate with the same sense of rule-breaking exuberance that his outdoor pieces do. Yet they also felt gentle, almost comforting, and hinted at other dimensions of the graffiti artist’s vision.

Because I didn’t want to miss the show, I attempted to contact the organizers — and there are quite a few cooks operating in a very tight kitchen. The Jersey City municipal government, the JC Office of Cultural Affairs, the Mural Arts Program, and the Port Authority of New York and New Jersey have all stamped their logos on the Commuter Gallery project. When I asked for hours, I didn’t get a response, which seemed like a bad sign. Finally, the PATH responded to a tweet, confirming the hours on the gallery’s door. 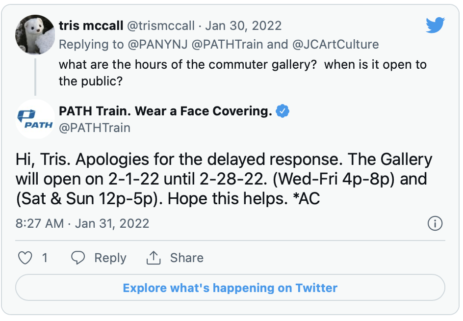 I didn’t arrive at the periphery of these posted hours. On my second trip, I deliberately picked the absolute midpoint of the Commuter Gallery schedule because I thought it would give me the best chance of catching a show I wanted to see. On another of my failed attempts to get in, I waited outside the Gallery for twenty minutes in the hope that somebody would open the door. Nobody did.

In all, I went three times during their posted hours and never got in.

How do the organizers behind this space expect rush hour commuters to feel when the Commuter Gallery is closed when the very sign on the door says it ought to be open?  Most aren’t going to care; they’re late for work, or rushing to get home, and they’re not going to want to stop at a gallery anyway. But a few will. They’ll be curious — and, in short order, disappointed. They may conclude that Commuter Gallery is just a hollow showpiece: something for the government and Port Authority to crow about during special events, brag about to the regional press, and neglect thereafter. 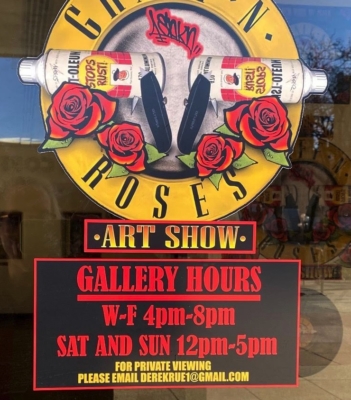 The hours on the door jibed with the PATH tweet

On paper, the Gallery is a nice idea. Putting an art space in the middle of a much-loathed piece of brutalist architecture that has contributed mightily to the un-walkability of the surrounding neighborhood does feel like a reasonable intervention in a bad setup. But if the art gallery is casually staffed and closed when it’s supposed to be open, it becomes just another metaphor for Grove Street’s continuing disregard for Journal Square. It makes the Commuter Gallery feel like part of a hype campaign: something politicians can point to in order to suggest that, on their watch, a working-class neighborhood is on the rise.

By now, the relationship between the Mural Arts Program, municipal authorities, and destination marketing ought to be blindingly obvious to everybody in the arts community. Yet many of our most accomplished graffiti artists continue to play ball, and that strikes me as bizarre and maybe even suicidal. The “reduction of graffiti” isn’t just one of the JCMAP’s stated objectives — it’s the very first one they list on their webpage. The government is happy to harness the talents of street artists and apply them to their ongoing publicity campaign, as long as those artists show that graffiti exactly where and when the city wants them to, and never color outside the lines. If you’re compliant, they’ll tuck your work in some antiseptic alley or a borderland they want to beautify, call for the cameras, and take a victory lap. After that, you’ve served your purpose and you’re on your own. If you’re lucky, when it suits them, they might just turn on the lights.

This is not the sort of column I like to write. I launched Eye Level to draw your attention to the many great shows on view in Jersey City and the fantastic artists who call Hudson County home. I don’t want to dwell on our shortcomings; that would be a far less useful exercise. But sometimes I’m compelled to be negative, and when that happens, it’s always the city government and its satellite organizations that force my hand. No small gallery in Jersey City would ever try to get away with ghosting visitors like this.  Only our municipal authorities do that.

They do it because they’re large enough to absorb whatever discontent their actions generate; if we’re locked out in the cold?, big deal. They do it because their instrumental, mercenary view of the arts doesn’t accommodate the sort of daily maintenance that a real arts space requires. I suspect they also do it because of their fundamental contempt for people like me and you. I’m not a critic arranging for private viewings. I’m just an art fan like you are, experiencing art in the same way you might. And in February 2022, this viewer cannot recommend engagement with the Commuter Gallery — not until the people behind it prove more trustworthy.