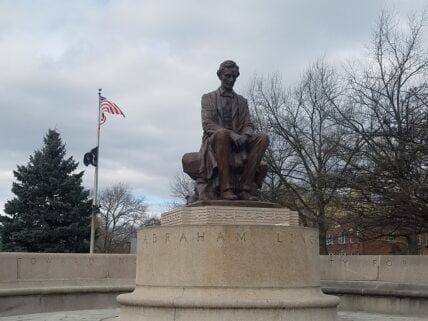 Soon after the assassination of America’s 16th president, hundreds of American towns and cities spawned public-spirited citizen groups dedicated to preserving the memory of Abraham Lincoln.

And Jersey City—despite a steady drumbeat of anti-Lincoln sentiment resulting in a statewide rejection of the Republican nominee in presidential balloting in 1860 and 1864—was no exception.

Today, 155 years after its formation, the Lincoln Association of Jersey City (LAJC) is still active.  (Indeed, it is one of the longest-serving associations nationwide.) The group will honor the famous statesman on the occasion of his birthday, Feb. 12, beginning with a noon wreath-laying at the “Lincoln the Mystic” statue in Lincoln Park and concluding with a 6 p.m. dinner at the Liberty House Restaurant in Liberty State Park.

Civil War veterans created at least five other Hudson County-based associations in Union City, Kearny, Bayonne, Hoboken, and North Bergen, but none have survived, according to LAJC historian Dennis Doran who has yet to quench an appetite for literature about that period of U.S. history.

“Since I was a little kid, I’ve always been fascinated with the Civil War,” he said. “That’s why I was so glad when I was invited to my first association dinner in 1980.” (He served as president in 1998.)

The LAJC’s mission—only slightly amended since the founders convened in Zachau’s Oyster House at 146 Newark Ave. (now Skinner’s Loft)—is to keep alive the memory of Lincoln, to encourage the study of his life, and to emulate Lincoln’s ideals and service to his country.

A careful study of Lincoln, LAJC president Stephen Stamos said, will reveal that the man whom “some regard as a saint” was in fact a savvy politician skilled at cutting deals (mainly with those in his own party).

Which probably explains, at least in part, Lincoln’s appeal to the Jersey City crowd, Republicans and Democrats alike. “A lot of our past presidents said it well,” said Stamos. “Jersey City loves politics, and Lincoln was a politician.”

At the same time, Stamos said, the Illinois lawyer “saved our country in its greatest trial.” During his administration, he added, “Lincoln had challenges most politicians wouldn’t face in a lifetime.”

How he managed to cope, Doran said, was a reflection of his “political genius,” as exemplified by his assembling of a cabinet with men like Stanton, Seward, and Chase who were bitterly opposed to his candidacy yet became willing partners in a unified government.

“He was a master at reconciling divergent viewpoints,” Doran said. (A notable exception was his having commanded general George McClellan, the reluctant warrior, who failed to dislodge Lincoln from the presidency in 1864 as the Democratic nominee. McClellan later served as a one-term New Jersey governor.)

Lincoln’s ultimate victories on the military and civilian fronts—including guiding the country through civil war and adoption of the 13th Amendment abolishing slavery—are all the more remarkable, Stamos said, given two great personal setbacks: the loss of one son before becoming president and the death of a second son after his election.

Another factor that, for Stamos, Doran, and other association members, makes Lincoln stand out is his skill as a writer. “I first fell in love with Lincoln when reading his speeches. It was the eloquence of his language that sang as he spoke,” said Stamos.

During Lincoln’s presidency, a Jersey City newspaper The American Standard (1859-1875), which was linked to the anti-abolitionist “Copperhead” faction of the Democratic Party, vilified Lincoln and opposed the draft in the run-up to the Civil War. The Evening Journal (later known as The Jersey Journal), founded in 1867 by Civil War veterans Major Z.K. Pangborn and Capt. William Dunning along with Joseph Dear, was pro-Lincoln and hailed him as the Great Emancipator.

In the 1920s the LAJC commissioned sculptor James Earle Fraser, designer of the Buffalo nickel and End of the Trail sculpture of a Native American on horseback, to create a monument to Lincoln at the Kennedy Boulevard entrance to the park subsequently named for the president at the LAJC’s urging. Fraser wrote that he got the idea for his creation after seeing Lincoln lost in thought while perched on a boulder in Rock Creek Park along the Potomac River just after his initial election. Local schoolchildren contributed $3,500 in pennies and nickels toward the overall cost of $75,000 for the statue dedicated on Memorial Day 1929. In February 1930, the LAJC began the annual custom of laying a wreath at the foot of the statue even, Doran recalled, in blizzard conditions.

No matter how well intentioned its mission, records show that the LAJC   excluded women from membership until as late as 1969 when Dorothy Nicoll Bunnell, who ran a local funeral parlor on Highland Avenue, was elected president. Turns out she had had an interesting link to Lincoln’s locks. Her husband’s grandfather, a Washington, D.C. undertaker, had embalmed Lincoln after he was fatally shot, and Bunnell inherited snippets of Lincoln’s hair, which she mounted and kept on display in the funeral parlor, according to Doran.

Information on the dinner can be found – here.