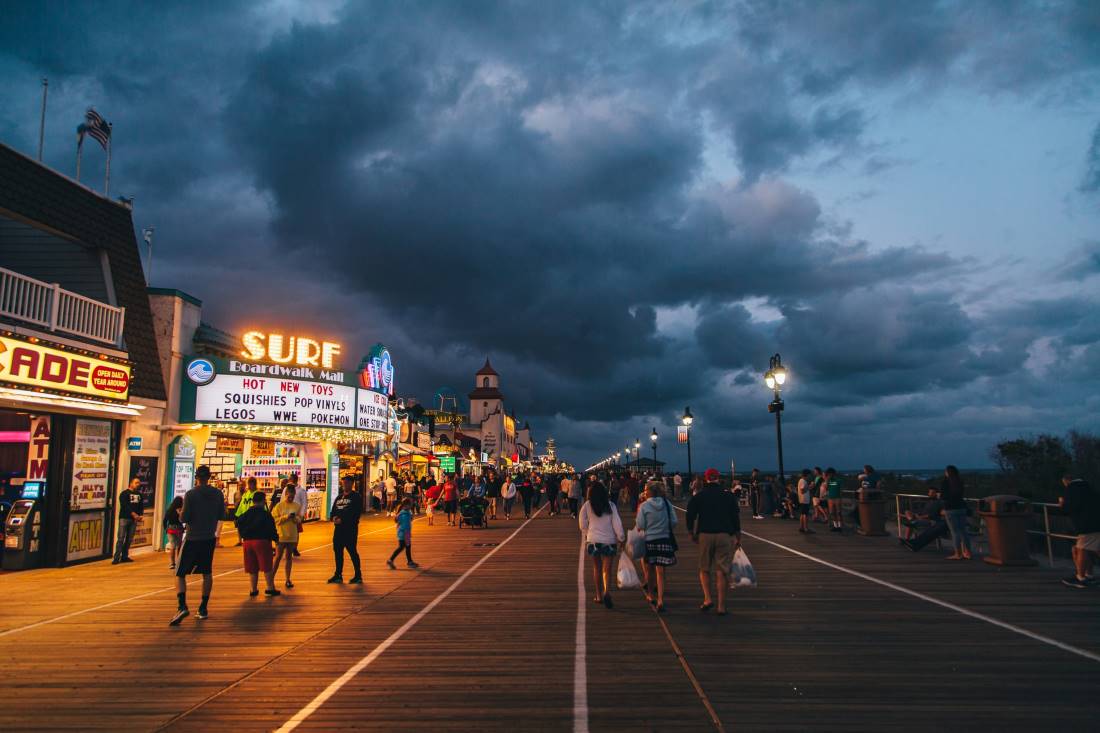 Beachgoers seek normalcy after long lockdown, but not without misgivings about pandemic

On a warm afternoon at Seaside Heights, Nick Amoresano allowed himself a trip to the beach for the first time in about three months of pandemic-related confinement, but said he wasn’t completely confident that mingling with hundreds of others was the safe thing to do.

“You obviously take a risk when you come out here,” said Amoresano, 21, a college student. “I feel like now, we’re at a point where the total number of cases has dropped enough where we can feel safe going out, for the time being at least.”

On Saturday, Amoresano sat close with friends and shared the beach with others, some of whom were practicing social distancing and others who appeared to be ignoring it, as they tried to shrug off months of stay-at-home orders and state-ordered business shutdowns, and revert to some semblance of normalcy.

He expressed confidence that Gov. Phil Murphy has done the right thing by imposing stringent lockdown orders since mid-March. By comparison with states like Texas and Florida, where a resurgent virus has recently forced the reimposition of some closures, New Jersey set the right policies, whereas those that didn’t act with such force now appear to be paying the price, he said.

“I feel like our government has done a good job so far in keeping everything low-key and closed down for as long as they possibly could, and now the cases are on the way down,” he said. “We were able to flatten the curve.”

But his confidence didn’t extend as far as the Seaside Heights boardwalk about 100 yards away where a throng of visitors, most not wearing masks, were mingling, strolling, and queuing for hot dogs, and women in the long line for the ladies’ room were a lot less than 6 feet apart.

“When you’re walking up there, you are taking a little bit more of a risk but you are passing by these people; you are not really staying in an enclosed area,” Amoresano said. “You hear about these hotspots.”

The gathering of large numbers of people in Shore towns as the summer season gets underway has renewed concern among doctors, local officials and even some beachgoers about a possible resurgence in the virus after a significant decline in infections thanks to three months of stay-at-home orders and state-mandated business shutdowns.

As of June 30, the number of new hospitalizations for the virus was down 95% from its peak, while the number of patients in intensive care was down 89%, Murphy said Wednesday.

Towns up and down the Shore are hoping that their businesses can salvage a successful summer season after an economically disastrous shutdown lasting three months in some cases. Local officials are urging visitors to continue to wear masks and stay away from others who are not in their immediate family.

But the Shore’s hopes for a full return to normal activity were dashed on Monday when Gov. Murphy postponed plans to allow indoor dining, which had been scheduled to resume on Thursday, July 2 but have now been put off indefinitely because of the recent surge in infections in many other states and the violation of social-distancing rules by a few New Jersey restaurants and bars.

“Given the current situation in numerous other states, we do not believe it is prudent at this time to push forward with what is, in effect, a sedentary indoor activity, especially when we know that this virus moves differently indoors than out, making it even more deadly,” Murphy said at his daily briefing on Monday.

He said the infection spikes in other states were caused in part by indoor dining by people who weren’t wearing masks.

“We do not wish to see New Jersey experience a similar spike,” he said. “We have been cautious throughout every step of our restart, and have always said that we would not hesitate to hit pause if needed to safeguard public health.”

While most bars and restaurants, and their customers, have complied with social-distancing rules, a few have not, and that risks reversing the state’s progress in curbing the virus, Murphy said.

“It only takes one,” he said. “The careless of one establishment can completely undo the good work of the others. We will not tolerate outlier bars and restaurants and, frankly, patrons who think the rules don’t apply to them. Compliance is not a polite suggestion; it is required.”

Asked at his briefing on Wednesday whether people should stay home or limit gatherings to prevent any COVID-19 spread over the holiday weekend, Murphy urged people to wear masks and celebrate outside rather than inside if they could. But if there’s no option of gathering outside, “I think you’ve got to limit” the number of people, he said. 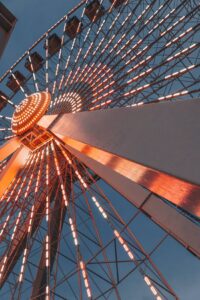 Photo by Ethan Hoover on Unsplash

Murphy urged New Jerseyans to continue to follow social distancing guidelines so that the state doesn’t experience a spike like those in California and Arizona. “We pray for them, we wish them nothing but a speedy resolution but we can’t let that happen to us, we can’t go through hell again.”

Meanwhile, the mayor of Seaside Heights, Tony Vaz, said his administration hired about 15 “social-distancing monitors” starting at the end of June, to “courteously” remind people on the beach and the boardwalk that they must stay at least 6 feet apart from anyone who is not a household member.

Operators of restaurants and amusement arcades, which can reopen starting this Thursday, July 2, will be responsible for complying with the rules, and will risk ticketing or even the loss of their licenses if they are over-occupied, Vaz said.

The July 4 weekend will be a big test for people’s observation of social distancing because the crowds are expected to be a lot bigger than anything seen since the Shore started to reopen, swelled by the many house rentals that start from July 1, Vaz said.

He acknowledged that many people on the boardwalk lack masks but said mask wearing is an “individual choice” that he can’t enforce.

Asked whether the summer rush to Shore resorts like Seaside Heights could undo all the good work that New Jersey has done to curb the virus, Vaz said it will depend on the willingness of businesses and individual visitors to do the right thing.

For Dr. Judith Lightfoot, chief of infectious disease at Rowan University’s School of Osteopathic Medicine, beach crowds at the Jersey Shore can’t realistically be expected to practice social distancing because they are too tightly packed, and so represent the start of a potential new wave of infections.

In addition to possible new community spread, the Shore also risks exposure from the virus being brought in from out of state, despite the recent order from the governors of New Jersey, New York and Connecticut that anyone coming from at least 16 states where infections are newly surging should quarantine for two weeks upon entering the tri-state area, she said.

“People are migrating into New Jersey, and if they don’t quarantine for two weeks, they are going to be out and about, and who’s going to monitor that?” she asked. “Were they practicing social distancing wherever they came from, even if it was in the tri-state area? Are they going to wear masks?”

Larger groups of extended family visiting the Shore should not assume that they won’t be exposed to COVID-19, Lightfoot warned, because the more people, the greater the likelihood that some of them will bring in infection from outside the group.

And if someone gets infected over the holiday weekend, it won’t take long for it to show up. “If somebody had active Covid over the July 4 weekend, that individual will probably show symptoms within 72 hours to a week,” she said.

At Longport, there are no restrictions on the number of beach badges the town is selling because the beach is wide enough to take the expected number of people this weekend, while not violating social-distancing practices, said the mayor, Nick Russo.

So far this summer, there have been no complaints about social-distancing violations, Russo said. But he said that could become more challenging as rising temperatures draw more people to the water’s edge to cool off, making it more likely that they will move off other areas of the beach, and come within 6 feet of each other.

“It would not surprise me if our police officers remind people: ‘We realize it’s hot, but we still have to do what’s right and try to keep six feet apart,’” he said.

On the beach at Seaside Heights, Aileen Narfolejos, 29, an accountant from Piscataway, had come for a day out with her husband, her parents and her sister. She said they always wore masks on the boardwalk and kept the appropriate distance from others on the beach, but nevertheless recognized that their outing was not without risk.

“We don’t see many people wearing masks, which is worrisome but we can only do what we can do,” she said. “We’re all working from home so we feel safe enough that we can be together without exposing ourselves to the virus.”

Colin Baldwin, 23, a recent college graduate, said he wasn’t so worried about getting the virus because he is young, but is more concerned about giving it to others, and so has given up going to bars and restaurants, even for outdoor dining, which is now allowed by the state.

“It’s something I try to be good about,” he said. “I might grab a water bottle but that would be the extent of it.”

Despite the attempts by town officials to enforce social distancing, and the threat of penalties for bars and restaurants that break the reopening rules, the success or otherwise of Jersey Shore towns in preventing a COVID-19 resurgence this summer will in the end come down to individual action, argued Mayor Russo of Longport.

“We as a government cannot legislate common sense,” he said. “It’s absolutely impossible.”