A Jersey City man has been charged in connection with a motorcycle accident that killed a Jersey City police officer last year.

Rafael Rodriguez-Rivera, 30, surrendered to detectives with the Hudson County Regional Collision Investigation Unit today. He was released on a summons and is scheduled to appear in court on February 8, 2022. 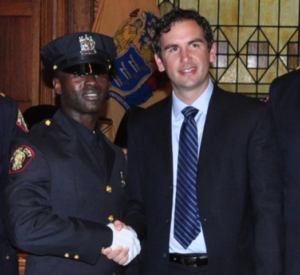 The accident took place on July 16, shortly before 2:00 a.m. Rodriguez-Rivera was traveling west on Communipaw Avenue in his 2012 Ford Escape when he attempted to make a left turn onto Woodward Street and collided with Police Officer Morton Otundo who was traveling in the opposite direction on his Yamaha motorcycle. Otondo died a short time later.

The investigation found that Rodriguez-Rivera did not have a valid New Jersey driver’s license.

The motorcycle website A Ride Apart, calls Otundo’s type of collision, “The most common motorcycle accident.” A Ride Apart explains how such accidents happen. “A car fails to see you or judges your speed incorrectly, turning in front of you at an intersection. Blame inattention, distraction, blind spots and even psychology; a driver looking for cars perceives merely an absence of cars, not the presence of a motorcycle.”

Rodriguez-Rivera has been charged with one count of Causing Death While Driving Unlicensed.