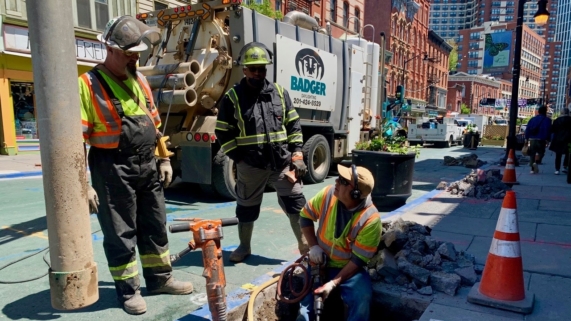 The sound of jackhammers is echoing down Newark Avenue as the $6.7 million upgrade to the the Pedestrian Mall begins in earnest.

On a sunny afternoon, workers were seen cracking open evenly distanced sections of sidewalk that will house concrete foundations for light poles. Said one worker “there are going to be lights strung up everywhere.”

The brainchild of Mayor Fulop and the Historic Downtown Special Improvement District, the project, which came in some $2 million over initial estimates, has been criticized for its cost by residents of other wards, many of whom feel the Downtown already receives the lion’s share of development dollars. Local businesspeople and many Downtown residents have been largely supportive however, as ever-increasing foot traffic brings new restaurants and shops along the closed-off street.

Work on the portion of the Pedestrian Mall between Jersey Avenue and Grove Street will continue through November. The schedule is as follows: