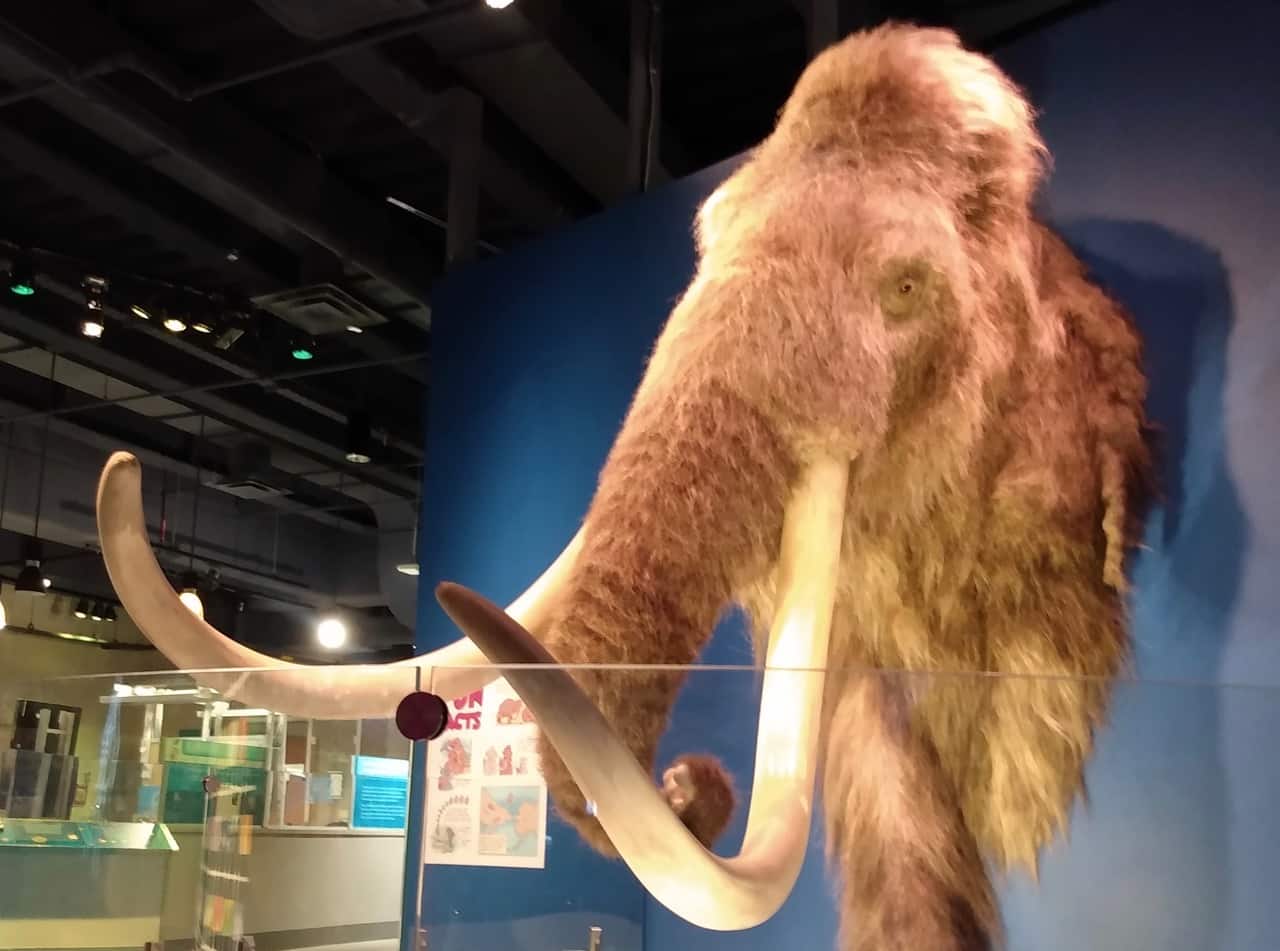 Elephants from the Pleistocene epoch have checked in at the Liberty Science Center in Jersey City.

On view is a model of the woolly mammoth, which thrived and ranged widely in the Arctic and environs during the ice age before disappearing around 4,000 years ago.

But today, the pachyderm — whose preserved remains are found periodically under permafrost in northern climes — is back in the spotlight as a potential planet-friendly agent for change.

Which is why the museum has installed a new “Making Mammoths” exhibit that was opened to the public this past Saturday courtesy of Blue Rhino Studio of Minnesota.

The exhibit, featuring a 9’3” tall foam and fiberglass replica of the creature’s head and tusks fashioned from steel armatures, pays tribute to the work of genomics pioneer George Church, a Harvard Medical School professor.

Church, 66, a geneticist with a background in molecular engineering and chemistry, has studied DNA extracted from mammoth carcasses with the idea of introducing genetic sequences into modern-day Asian elephants — both as a way to rescue an endangered species and to bolster the planet’s defense against climate change.

When mammoths still roamed the Arctic regions, they routinely uprooted trees, thereby maintaining grasslands and, in the process, isolating gigatons of carbon in the frozen tundra, suppressing the spread of methane from topsoil.

Scientists like Church now hope they can create a hybrid “mammophant” that can adapt to a new cold habitat, trample the area’s existing trees and brushes and, once again, fight global warming.

Experts estimate there are fewer than 50,000 Asian elephants left in the wild.

In a tape made for the science center’s visitors, Church elaborates: “We’re trying to make cold-resistant elephants that fill an ecological niche. They don’t have to be perfect copies of mammoths, just good enough to do their job over 10 to 20 million square kilometers of the Arctic.”

As herbivores, Church explained, “The elephants love to knock down trees, even if they’re not planning on eating them, and the trees in the Arctic are pretty easy to knock over. That would result in the carbon in the trees getting buried in the permafrost and freezing and then being replaced by more photosynthetic grass, which is easier to pound down.”

Using a technology known as CRISPR DNA-editing, Church has isolated about 42 genes, such as those favoring more fur, thicker ears, and fat deposits,  all promoting extreme cold tolerance that could be developed in a lab. The genes could then be introduced into the nucleus of an Asian elephant cell either placed into the egg of a surrogate mother or by alternate means “outside the body.”

The gestation time would be a minimum of two years, Church said, and if the experiment proved successful, that would be followed by several years of testing the mammophant’s behavior in a cold environment.

If the genetic experimentation is successful, Church said his team intends to make tens of thousands (of mammophants) if not hundreds of thousands.

Liberty Science Center awarded Church one of its Genius Grants in 2018, and the following year museum President and CEO Paul Hoffman proposed setting up an exhibit focused on the woolly mammoth and Church’s research. Blue Rhino began assembling it in this May and finished it this month.

“Dr. Church’s work to resurrect mammoths is absolutely bleeding edge,” Hoffman said. “We are excited to showcase such intriguing genomic science and let our guests explore the contemporary bioethical questions it raises. This new exhibit … will appeal to learners of all ages ….”

Indeed, part of the exhibit includes an illustrated panel by science cartoonist Larry Gonick that helps young visitors connect with the thinking behind the creature depicted by the mounted model.