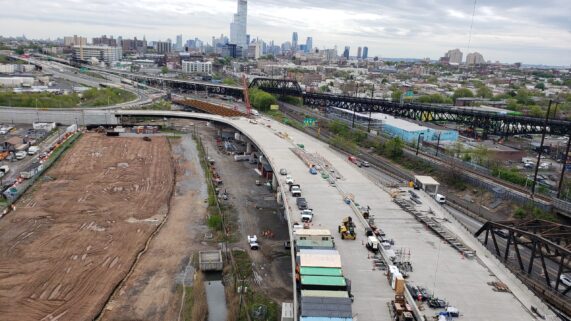 Ever caught waiting in traffic on Route 7 for a boat to pass under Wittpenn Bridge? Next year you’ll wait less often.

Construction on the bridge—named for former Jersey City Mayor H. Otto Wittpenn—should conclude in 2022, according to the New Jersey Department of Transportation, which is overseeing the project. The new Wittpenn Bridge will open to traffic as early as 2021.

Head west along St. Paul’s Avenue to the bottom of the hill, execute a few winding turns, and there it is—a sprawling, multi-acre construction site filled with dirt, heavy equipment, workers, and plenty of infrastructure.

In November 2011, work began on the replacement of the bridge linking Jersey City and Kearny over the Hackensack River, along with new approach ramps and the realignment of Fish House Road—primarily a truck route serving industries on the west side of the river.

The new bridge will rise just north of the existing vertical lift bridge, which will then be demolished. 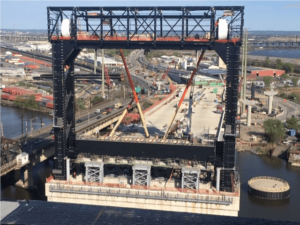 Weakened by the increased weight and speed of vehicles over time, the 90-year-old, 2,169-foot-long bridge has been renovated four times between 1953 and 1992, at costs totaling $13.5 million. Nonetheless, it has been rated “structurally deficient and in an advanced state of deterioration” by federal highway engineers.

It was built in less than two years at a cost of $3 million.

By contrast the new bridge, ramps, right-of-way acquisition, utility relocation, and reconfiguration of Fish House Road—the entire cost of which was initially pegged at $317,400,000 in 2002—is now estimated to be completed in 2022 at a cost to federal taxpayers of $493.2 million according to the NJDOT.

In December 2019, NJDOT spokesman Schapiro told NJ.com the delay was due to “… more challenging work to install the machinery, cables and counterweights needed to lift the center portion of the bridge (the steel deck) to permit ships to pass underneath it.”

Additionally, Schapiro blamed harsh winter weather in 2018 for contributing to the lengthening of the construction timetable.

As many as 52,000 vehicles traverse the Wittpenn Bridge on an average weekday, but if the structure is flooded out or shut for maintenance, drivers are compelled to shift to the bridge on Truck Route 1 & 9 or the Pulaski Skyway as alternate ways to cross the Hackensack River going west.

Even when the bridge is working, motorists must contend with narrow 10-foot-wide lanes in each direction with no separation barrier, an open steel grid deck that makes it hard to maneuver in rain or snow, no shoulders on the bridge or its approaches, and ramps that make it hard to speed up and slow down.

These safety issues have contributed to a higher rate of accidents, particularly near the Fish House Road turnoff, which has twice the statewide average.

Drivers using the Wittpenn bridge are also plagued with periodic bridge openings to allow marine traffic to pass through. Here’s what the new bridge project will offer:

The new bridge requires the addition of three river piers for support, according to general contractor George Harms Construction Co., of Howell, New Jersey. An existing fender system (concrete piles and timber placed between bridge channel piers to help guide vessels through those channels) is being extended to the north to protect the new 3,450-foot-long mainline structure.

No residential structures are being displaced by the project, but two industrial businesses—Shinn Bros. Properties in Kearny and Terminal Ventures in Jersey City—each with 15 employees will close. Terminal is hoping to remain in Jersey CIty.

Still under construction are the new vertical lift bridge span and towers, the east and west approach spans to the bridge, the relocation of Fish House Road, flyover ramps to Fish House Road, the ramp to Newark Avenue, and a new embankment where the relocated roadway and ramps will connect the new bridge to the roads. Extensive work relocating various utilities also remains to be done. 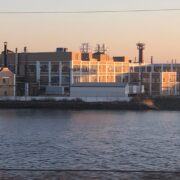