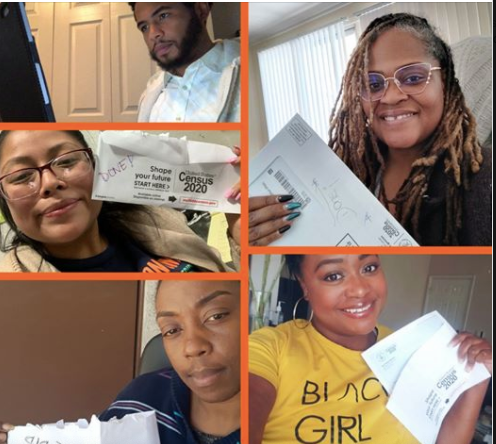 There’s a lot at stake for New Jersey, which was undercounted in the last two censuses

By now, every New Jersey household should have received an invitation to complete this year’s federal census. While that may be the last thing on people’s minds, advocates say the spreading COVID-19 virus demonstrates the importance of being counted.

“In times of crisis, communities can see the importance of social safety net programs, and these programs depend on an accurate Census for fair funding,” said Peter Chen of Advocates for Children of New Jersey (ACNJ), which is coordinating the census effort of a number of groups and nonprofits in New Jersey.

For more than a year, groups like ACNJ have been preparing for a major push to get New Jerseyans — particularly those in groups considered hard to count — to complete the decennial census.

In addition to efforts by the U.S. Census Bureau itself, New Jersey’s Complete Count Commission plans to spend $3 million on ads in the coming weeks. It has launched a website with information, including a video on how to answer the census online and toll-free numbers to enable a person to fill out the survey in more than a dozen languages. From the outset of census promotion — long before the pandemic struck — the bureau had wanted everyone to fill out the census online.

The state also has given about $5.2 million to counties and community organizations to help get the word out.

Many of the efforts envisioned by nonprofits had involved holding events or face-to-face neighborhood meetings to explain the importance of getting an accurate population count and convince those who may be reticent, including undocumented residents, that completing the census is safe. There were also plans to help older residents and others without internet access to fill out the survey online or by phone at churches and other gathering places.

None of those can happen now, given the state of emergency and Gov. Phil Murphy’s stay-at-home order meant to limit the spread of the novel coronavirus that had already infected close to 6,900 New Jerseyans and killed ,81 as of Thursday.

As a result, many groups are redirecting their pitches online and to social media. ACNJ has posted a YouTube video that provides salient information about the census and includes a pitch the group had planned to make at in-person trainings: “It’s really important that you know that you can help make sure New Jersey has a complete count in 2020.” The city of Paterson, which has had one of the more robust census promotional efforts in the state, is encouraging people to take a CensusSelfie and upload it to their website.

“Many organizations are now switching to creative solutions to share content through social media and other channels such as phone calls, text messaging, etc.,” Chen of ACNJ said.

The immigrant and worker advocacy group Make the Road New Jersey has livestreamed events explaining the census and how to complete it in Spanish and English on both Facebook and Instagram. The group has also opened a digital kiosk and theater on Monday afternoons and Wednesday evenings where people can get individualized help.

“Make the Road New Jersey moved census outreach and organizing to digital organizing for now,” said Rosa Lopez, a community organizer with the group. “This is how we are assisting folks if they have any doubts or questions navigating census questionnaire.”

There’s a lot at stake for New Jersey, which was undercounted in the last two censuses, in 2010 and 2000, and has areas with some of the largest populations in the nation at risk for not being counted properly.

Billions of dollars at stake

A study released earlier this year estimated that New Jersey got $45.8 billion in census-guided federal funding in the 2017 fiscal year, the ninth highest in the nation. Medicaid and Medicare are the largest beneficiaries of these, but there are more than 300 programs in all that cover a broad range of needs. The Leadership Conference Education Fund notes that a number of the programs people are relying on during the COVID-19 emergency — including aid for dislocated workers, food assistance, and services for senior citizens and the disabled — are apportioned based on census data.

“When households respond to the census on their own, it’s easier for the country to get the complete count we need to support emergency planning and recovery,” said Beth Lynk, the fund’s Census Counts campaign director. “It’s more critical than ever that census advocates work alongside community members to make sure everyone gets counted.”

If not enough New Jerseyans answer the census and the population increase since 2010 is lower than a number of other states,  there is also the potential for New Jersey to lose another seat in the U.S. House of Representatives because those seats are apportioned based on the decennial count; the state lost one in 2010 and now has 12 congressional members. Apportioning representation in the House roughly proportionately among the states was the initial reason the federal Constitution requires a count of the population every 10 years. (The first census was conducted in 1790.)

In 2010, New Jersey’s self-response rate was less than 68%. So far this year according to census officials, 28% of households have filled out the survey. That’s just slightly a fraction less than the national average. Census officials said last week that the rate was on target with what they had expected.

The bureau’s initial plan was to begin in-person follow-ups with householders who do not respond on their own, on April 9. That was also the original date for polling to start at colleges and other “group quarters” like nursing homes and prisons; May 13 was the target date for the rest of the nation. Officials announced last week that they have adjusted the schedule to protect both census workers and residents, delaying college campus visits until at least May 7 and the rest of the nation starting May 28.

“First and foremost, we want the public to know that the health and safety of our staff and the public remains of the utmost importance in everything we do,” said Tim Olson, associate director for field operations for the 2020 Census. “We’re also focused on getting a complete and accurate census, even in the midst of these uncertain times. We are carefully monitoring the situation. And we are following the guidance of federal, state, and local authorities.”

Counting college students and other so-called group-quarters residents could be problematic. The census is supposed to be a snapshot of where people are living on April 1. But with many college dorms closed — including virtually all in New Jersey — parents may report their college-age children as living at home, rather than in a dorm where they would normally have been. The distinction is especially important for getting accurate counts in communities with large student populations — including New Brunswick and Princeton. Officials said they are working with college officials to relay that message of where students should be counted.

Because of the later start for those non-response follow-ups, the census bureau is also extending the dates when those will end, with the last now scheduled for mid-August.

That will leave officials with less time than usual to crunch their data to provide population counts to state officials, who need it to redraw congressional and legislative boundary lines to keep the size of districts roughly equal. New Jersey is typically one of the first states to get its census results because it is one of only two states with legislative elections in 2021. The census prioritizes counts for New Jersey and Virginia because these are the only states that need the numbers to redraw legislative boundaries quickly in time for those 2021 elections.

Chen said that the most important message for the public is that the census is continuing despite COVID-19 and people can respond without risking their health.

“Public health and safety are critically important,” he said, “but luckily the 2020 Census can be filled out quickly and easily from the comfort of your home, online, over the phone or by mail. “

Just the FAQs: What the State DOE Is Telling Schools About COVID-19
Scroll to top