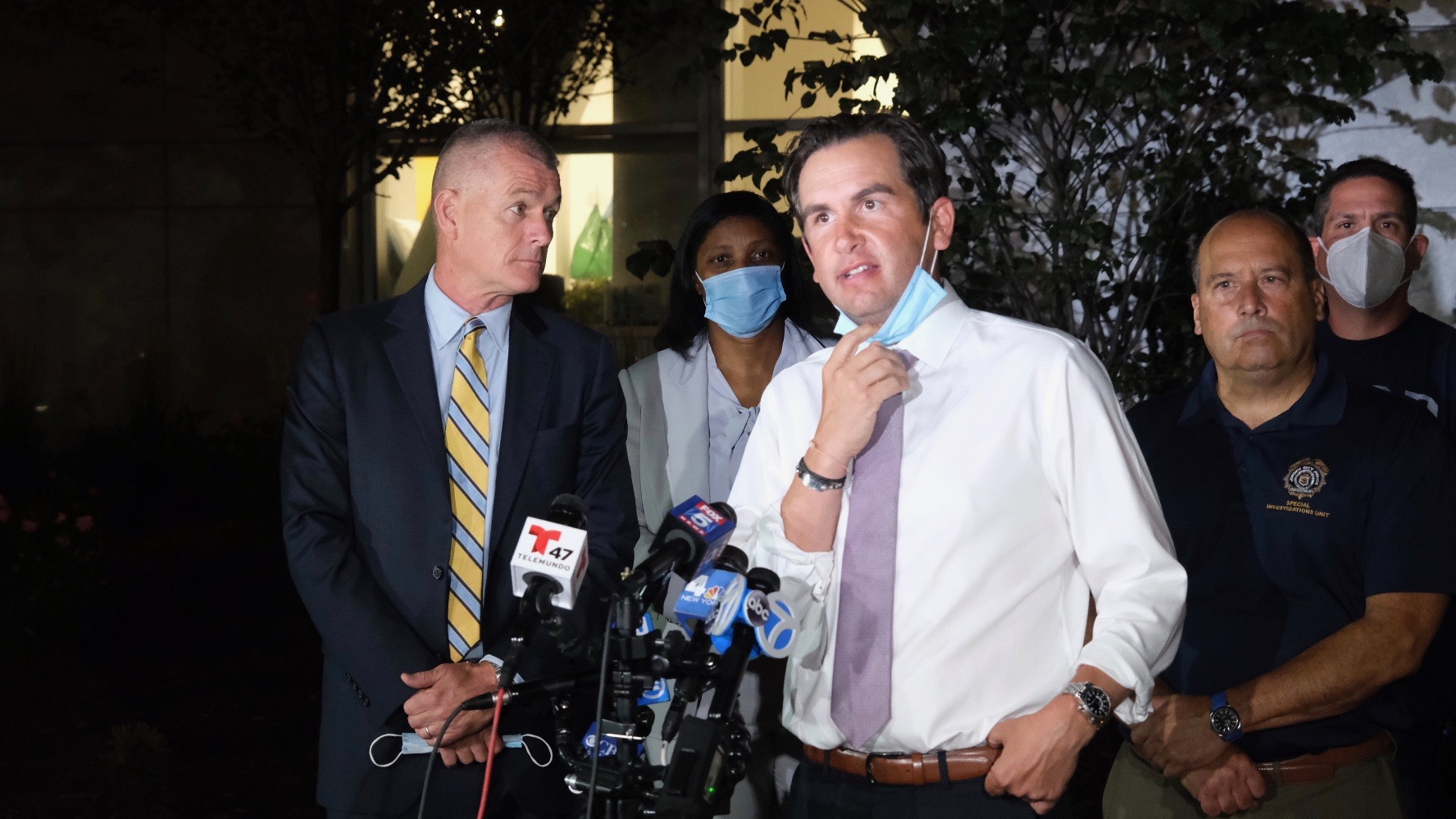 In June of 2019, The Wall Street Journal contained a glowing article about the Fulop administration’s success in driving down crime.  According to the writer, Fulop had inherited “a tiny police force and outdated and broken crime-fighting tools” but had been able to “drive down violence by hiring more police officers and updating the city’s anti-crime technology.”

That October, The Jersey Journal picked up the story, reporting that Jersey City was on track to see “a 50-year low in homicides.”

Then in December, The Wall Street Journal contained a second laudatory article, this one featuring Public Safety Directory James Shea, whom Fulop had hired upon taking office. “Jersey City had a problem with violent crime,” said Fulop. He wanted Shea to “turn the situation around.” Shea chimed in, “Kind of like New York had to in the early 90s.” Shea and Fulop, said the Journal, had brought about “a dramatic improvement” in public safety.

Together, The Wall Street Journal and Jersey Journal stories painted a compelling picture of an administration that had reformed a badly run police department to bring about unprecedented drops in crime. It was the kind of glowing coverage that a politician dreams of with most of it coming from a world-renowned newspaper.

There was one problem, however. The three stories were largely untrue. Since Mayor Fulop took office, crime overall has gone up, in some areas substantially.

Jersey City Times has spent several months pouring over Jersey City crime data compiled by the F.B.I in its Uniform Crime Reporting (UCR) Program. Every law enforcement agency in the United States, including the Jersey City Police Department, submits its data to it. The UCR program is, according to Rutgers Associate Professor of Professional Practice Alejandro Gimenez Santana, the “gold standard” of crime statistics.

What emerges from the F.B.I. data is a picture of crime in Jersey City far different from that painted by the administration with help from The Wall Street Journal and The Jersey Journal. In fact, from 2014, Mayor Fulop’s first full year in office, to 2019, the last year that data is available (and the last full year before the pandemic), crime went up by 15.1 percent overall. Violent crime, which includes homicide, aggravated assault, rape, and robbery, increased by almost one percent. Property crime, which includes larceny, auto theft, burglary, and arson—and represents approximately three quarters of all crime in Jersey City—was up by 19.7 percent.

On April 29, Jersey City Times provided the mayor’s spokesperson with the data on which this story is based and asked for comment. We received no response.

However, 13 days after the administration received notice that the publication of this story was imminent, The Jersey Journal carried an exclusive piece with information provided by the administration purporting to show its success limiting the rise in gun deaths from 2019 to 2020. The story repeated an innacurate claim put forth in earlier articles that in 2019 the administration had achieved “a historic low” in homicides.

A Few Bright Spots In an Otherwise Bleak Landscape

While crime went up overall from 2014 to 2019, Jersey City did see some reductions. Robbery came down 30.5 percent. Homicide came down 45.8 percent.  Arson—which represents a miniscule .2 percent of overall crime in Jersey City—ended down 70 percent. Burglaries were essentially flat.

These reductions were not enough to make up for big increases in larceny (up 25 percent), automobile theft (up 22 percent) and aggravated assault (up 23.6 percent).

Jersey City’s progress in fighting crime under Mayor Fulop looks even worse when compared to both New Jersey overall to and Newark specifically.

Jersey City compared poorly to New Jersey overall when it came to individual crimes and in particular crimes in the largest categories: aggravated assault, robbery, larceny, and motor vehicle theft.

A comparison with Newark is no more flattering.

On September 30, 2019, the mayor tweeted, “We are on pace for the lowest rate of violent crime/homicides in 50 years.” Just days later, The Jersey Journal featured an article repeating the mayor’s claim. It noted that through September 29, there had been only seven 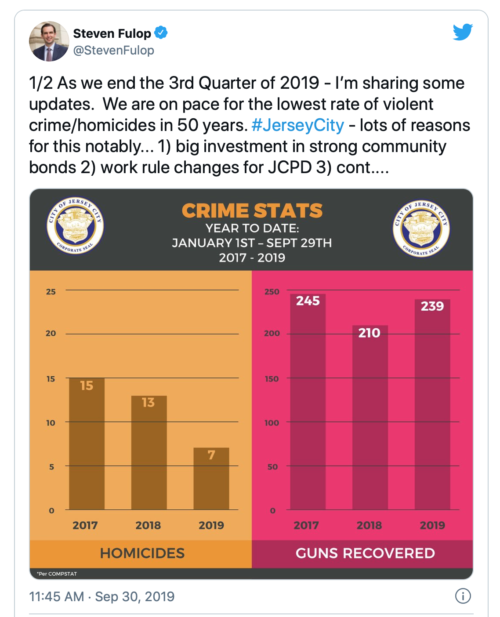 homicides, besting Mayor Jerramiah Healy’s record low of 11 crimes for all of 2012.

Then, two months later, the same Journal writer penned an article headed “Jersey City sees historic low in homicides in 2019.” The mayor, the writer reported, attributed this unprecedented low to “the increase in police officers, an increase in policing high-crime areas, the cease-fire unit, and the city’s revamped surveillance camera system.” The writer noted, “There have been 13 homicides with just two days left in the year, the least since 2012 when there were also 13.”

Apparently, the writer forgot that in 2012, under Mayor Healy, there were only 11 homicides. Mayor Fulop had not achieved the “historic low”; Healy had. What’s more, during the Fulop administration’s first six years, the city averaged 21 yearly homicides, exactly what the Healy administration averaged in the preceding six years between 2007 and 2012.

Despite the mayor’s repeated claim that homicides reached historic lows under his watch, there had been virtually no progress.

Not really “kind of like New York…in the early 90s”

If, as he told The Wall Street Journal, Public Safety Director James Shea believed that the job he faced in 2013 was like New York in the early 90s, he hadn’t stopped to look at the data. In fact, during the previous six years of the Healy administration, crime overall had come down by 20.7 percent. During this time, Healy had increased the public safety budget by 12 percent and brought it to 20 percent of the entire municipal budget. This was hardly the story of budgetary and management neglect told to the Journal.

What’s more, if Shea affected a “turnaround,” it was in the wrong direction. During the first six years under his watch, crime overall went up 15.1 percent even as the public safety budget increased by $8 million and the city added hundreds of new officers.

Healy was more successful in reducing both property and violent crime.*

* The violent crime time period was shortened because the Fulop administration failed to provide rape data for 2014.

Healy’s reductions can be seen at the individual crime level as well.

A Great Story at Odds With the Facts

Six months ago, as he delivered his yearly State of the City address, Mayor Fulop reprised his falling crime narrative. “We were able to…drive down crime in Jersey City to historic lows as 2019 had the lowest homicide rate we’ve seen in more than 30 years,” he said, adding that “while many cities across the country are seeing increases in violent crime, here in Jersey City we haven’t that same trend, and it’s largely due to the great work of JCPD.”

That no one fact checked him was unsurprising and, perhaps, by design. Two years earlier, the City stopped posting crime data on its website.

At the time, the move was met with dismay.

The late Councilman Michael Yun told The Jersey Journal, “We pay for that information to be made available to the public, and if it’s not, we are not getting the services we pay for. That’s not right.”

Current “Team Fulop” member and former cop, Councilman Richard Boggiano, told the Journal, “This is something that should be on the city website, and I’m shocked. This is ridiculous. You go to some of the city website links, and some of the information is three or four years old and not updated.”

Asked for her take, Pamela Johnson, director of the Jersey City Anti-Violence Coalition, was diplomatic but prescient, telling the Journal, “I just don’t understand why it was done…It’s important because we need to know what’s going on, and we need to know that the information being shared with the public actually correlates to the data. … I just don’t understand the logic in it.”

But there may have been a logic in it after all. By limiting access to real time crime data, a message could be crafted more favorable to the administration. Lincoln High School Principal Chris Gadsden sensed that the administration’s crime reduction story was questionable, telling The Wall Street Journal in 2019, “People in the community still don’t feel as safe as the narrative put forth by the city.”

It appears the feeling was justified.