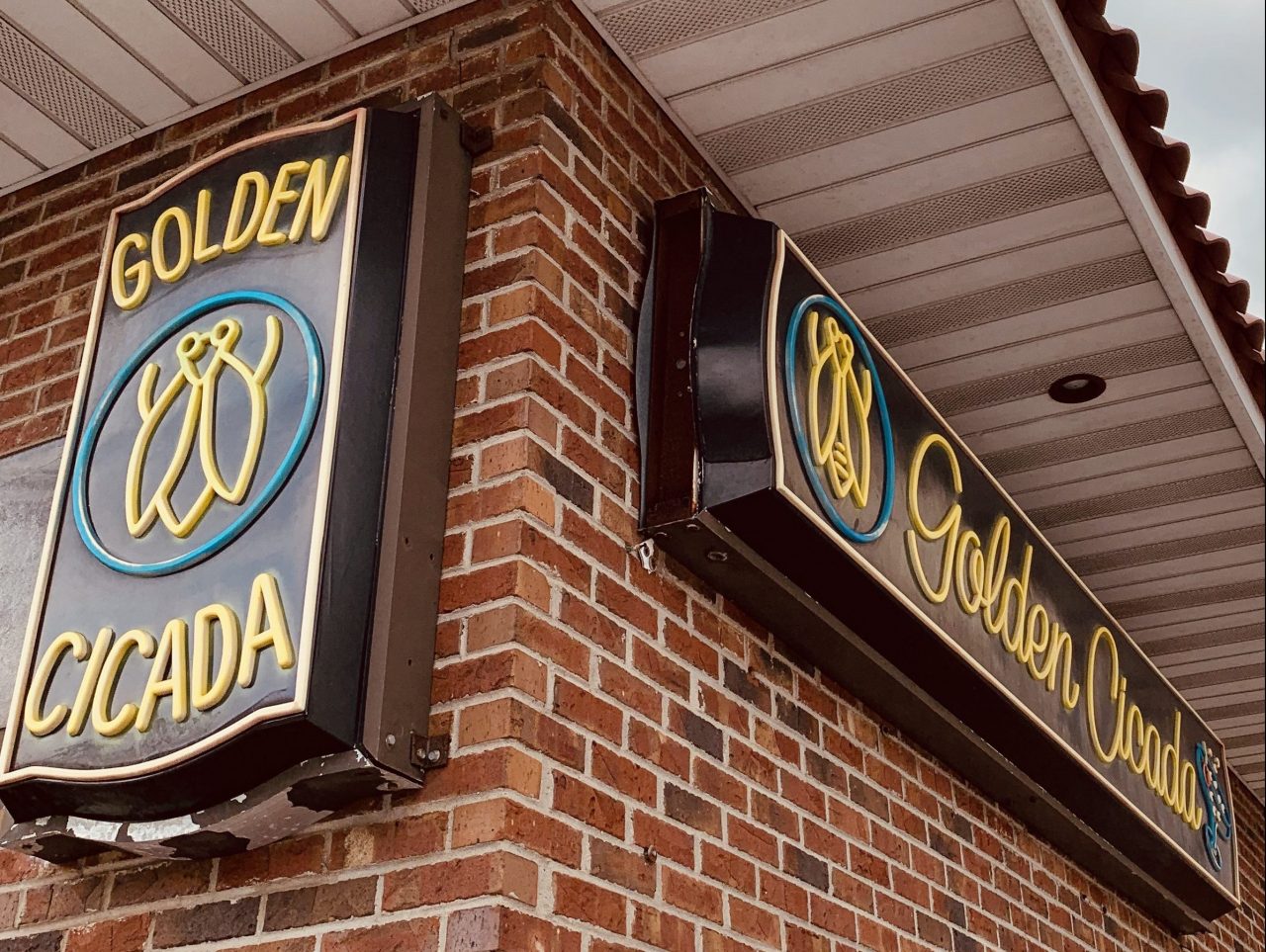 Yet, amidst all the extravagance you’ll see a building that is so out of place it feels as though someone just dropped it in from the outskirts of town. On the outside of the building is nothing more than a neon sign with the words “Golden Cicada.”  While it might not look like much, it’s one of the most beloved bars in Jersey City, and it has captured the spirit of the community for decades.

The Cicada, as the regulars call it, certainly lacks looks. The building is made of solid brick, it’s next to an empty lot filled with rusted cars, and the only time the bar shows the faintest hint of being open is when its neon sign is lit up on Friday and Saturday nights.

The bar’s decor isn’t much better. Barstools creak on the uneven floor, folding chairs surround low-sitting tables, and one small TV right in the center of the bar is usually tuned to public access TV.

Despite these things, the Golden Cicada is packed to the brim whenever it’s open. Tens of dozens occupy its space to drink their fill and belt out karaoke on the tiny TV. The reason they come is a simple one, and Patrick Wilber, a Cicada regular who was drawn to the bar because of its interesting Asian ambiance, was happy to explain.

“It’s about the people that work here and come here that makes it so special,” said Wilber. “If you come here and look at the type of people, they’re young and old, they’re lively and friendly, and they all want to come to experience the friendly confines of the Cicada. You’ll be able to go the whole night seeing people just coming into this bar and having a good time.”

The bar’s owner is Cheng “Terry” Tan, a Malaysian immigrant who purchased the spot in 1987, and he believes the reason patrons like Wilber love coming is because the venue’s purpose has always been to satisfy customers.

“Before it became the Golden Cicada, the bar was called “Kate Sweeney’s,” and everyone wanted to go drink there, too,” said Tan. “The woman who owned it wasn’t even Irish. Her name was Anna Cherminsky. She was Russian, and she just wanted all the people in the area to have a good time, so she came up with this idea for an Irish bar and wanted people to come to drink.”

When Tan, purchased the bar from Cherminsky’s estate, he wanted the spot to have a persona that was unique to his eastern culture, and it really didn’t take long for him to think of the perfect name.

“When I thought about possible names I almost immediately settled on the Golden Cicada,” said Tan. “The Golden Cicada is the main character in a novel in Chinese literature called Journey to the West, and the Cicada represents a man named Tang Sanzang, who is said to be a reincarnation of Budda. He’s a very popular cultural character, so I loved what the name represented to me.”

Additionally, it was Tan’s takeover of the bar in 1987 that led to the creation of the various quirks and named gimmicks that those who drink at the Golden Cicada know and love. The bar sells only a few brands of beer, but the Chinese Tsingtao is among them (strange for a Malaysian restaurateur); but perhaps the most famous of the Golden Cicada’s gimmicks is the Baijiu shot. It was during a trip to China in the early 2000s that Tan noticed the vigorous consumption of the spirit made from Sorghum, one that makes Baijiu the most widely consumed spirit in the entire world (according to a recent report by ABC News). It was at that moment he knew he had to bring it back to the Golden Cicada.

Asking for Baijiu means a VIP moment at the Cicada: It makes everyone freeze. Patrons throw back the clear liquid with 45 percent alcohol by volume and fight back the burn, and upon completion they get to hear Tan smash a giant gong to celebrate their accomplishment, and most importantly they get to wear and take home a shimmering gold necklace in the shape of a cicada to commemorate the feat.

“The most fun thing about bars is always participation from customers, and if they have fun they’ll come back,” said Iona Tan, Terry’s niece and a semi-regular bartender at the Cicada. “My uncle gets these necklaces from China, and they don’t necessarily mean a lot to the bar, but the customers love being involved, and that’s what makes it distinctive.”

When Tan came to the U.S. in the 1960s, he worked as an electrical engineer in Baltimore and then finally settled in Jersey City. At the time, the neighborhood that the Golden Cicada was in was more of a red-light district than the luxury neighborhood it has begun developing into, and Tan had reserves about his long-term satisfaction with owning the business.

“I didn’t always have aspirations to open a bar; it was more or less something I did to make some money,” said Tan. “However, when I finally purchased the bar in 1987, it became something I enjoyed doing, and I’ve continued to do it because of what it means to the community.”

Tan has on occasion succumbed to thoughts of selling his watering hole. In the late 2000s he had a health issue that prevented him from regularly working the bar, which is why it is only open on Fridays and Saturdays. Tan has even had agreements with developers to sell.

But when asked if he thinks the sale of the bar is inevitable because of the constant nagging from developers, Tan shrugged before saying that, if he sold, he would want it to be worth it.

“People come here all the time and ask about buying the location because of where it is, and they just want me to sell at the drop of a hat,” said Tan. “I honestly could have sold it and retired years ago and done what I want, but I won’t just sell because someone comes in here with a deal and tries to take advantage of me. One day if that deal comes along that I feel is fair, maybe I’ll take it.”

On the other hand, Iona believes that her uncle’s selling the bar would be cashing out at the wrong time.

“I tell him constantly that you have a gold mine that people in 2018 love,” said Iona. “I feel like these hipster spots that are neighborhood friendly and have a minimalistic charm thrive in the 21st century. People eat them up. He’d be crazy to sell it when so many people love the Cicada’s charm”

To that point, as long as Tan owns the bar, he’s going to make sure that he keeps with tradition and that whoever comes into the Cicada has a great time.

“This isn’t your typical bar. I try to challenge everyone who comes in here,” said Tan. “That’s what makes the Golden Cicada special. We talk politics, world events, books. As long as people come in here, I’ll be happy to serve them, and that’s what makes us a special part of the neighborhood.”

Board of Education Candidates Forum Video from October 10, 2019
Scroll to top