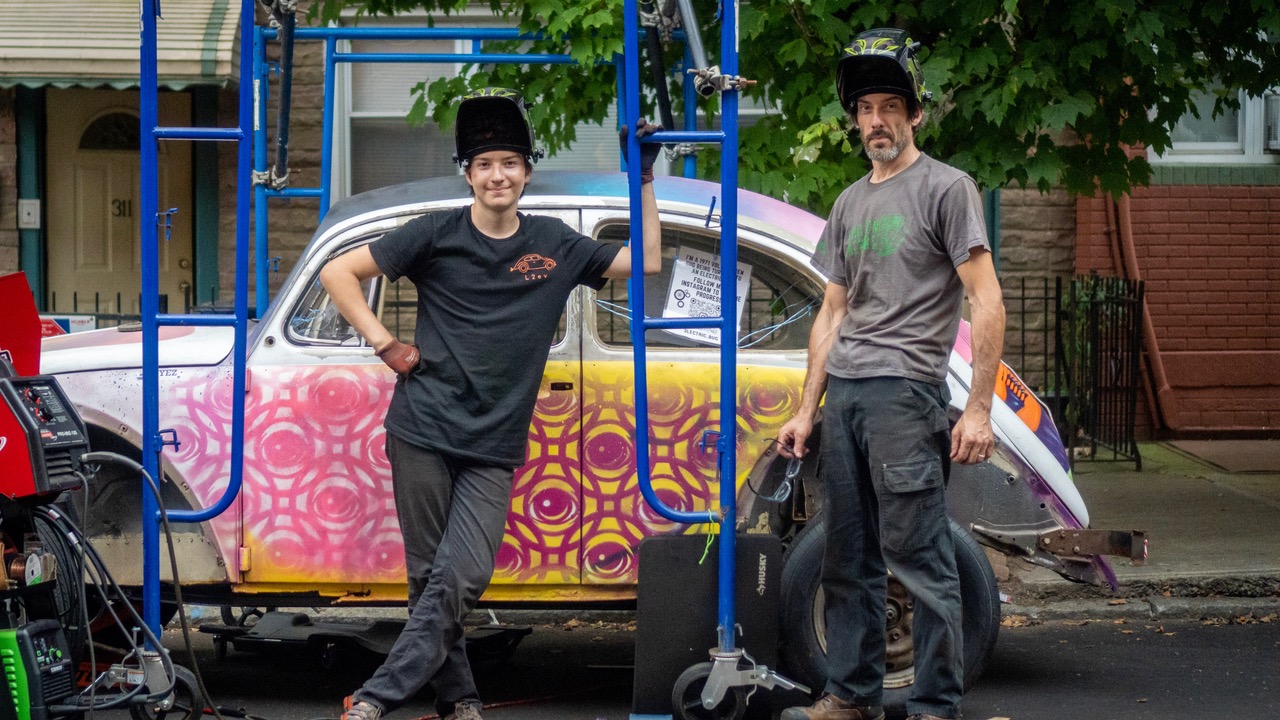 If you’ve taken a stroll Downtown through the Village lately, you may have come upon a strange sight: a flamboyantly spray-painted 1971 Volkswagen bug. The car is now on its way to becoming even more modern: by going electric. The team behind the conversion is a father and son duo, Dave and Lucas Slurzberg.

“[The project] started with my interest in race cars and race engineering … and just like … really complex pieces of machinery,” says the 14-year-old who hopes to become a race engineer. But the elder Slurzberg encouraged him to start small, so they first built an electric go-cart. 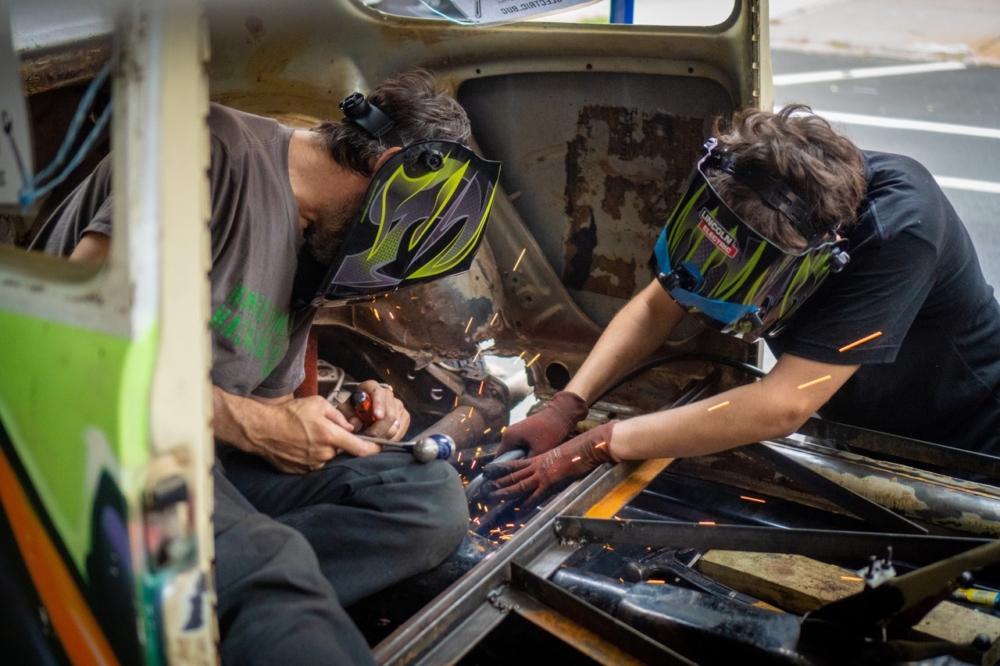 Dave and Lucas Slurzberg working on their VW to EV conversion. Photo by Ben Krejci

In December 2019, Slurzberg senior found the perfect car for Lucas to work on: a ’71 VW bug. He bought the car from the owner of the now-closed Golden Cicada. The bug was in rough shape. It had sat through Hurricane Sandy, so the brakes were locked, and the wheels couldn’t spin. The Slurzbergs ended up towing the car home.

The prior owner had attempted an electric conversion with its own custom-made electric motor. But the team said it wasn’t quite right. So, Lucas tried building several small-scale mockups of a car battery using cardboard, hot glue, and countless double AA batteries. In the end, he decided to ditch the idea of building a car battery from scratch. He had enough to do.

Instead, father and son will be using five “Tesla Packs” — a grid containing thousands of rechargeable lithium-ion battery cells. The packs are from older Tesla models and are not easy to find. Some will be stored in the rear of the car and others will go where the fuel tank was. The pair estimate that the car will be able to drive 90 miles on one charge, so no long road trips for Lucas, but it’ll be perfect for going to school when he’s a licensed driver in two years.

For as much work as they’re putting into the car, the Slurzbergs plan to keep as much of the original look as they can with hidden modifications. For example, they’re putting the recharging plug where the gas cap was hidden under the fuel door. As for the dashboard, the plan is to replicate the old one but on a digitalized screen. “You want to see your battery temperature and your cooling temperature and your motor voltage and all of your stuff because, well, just to make sure it’s okay,” says Lucas. 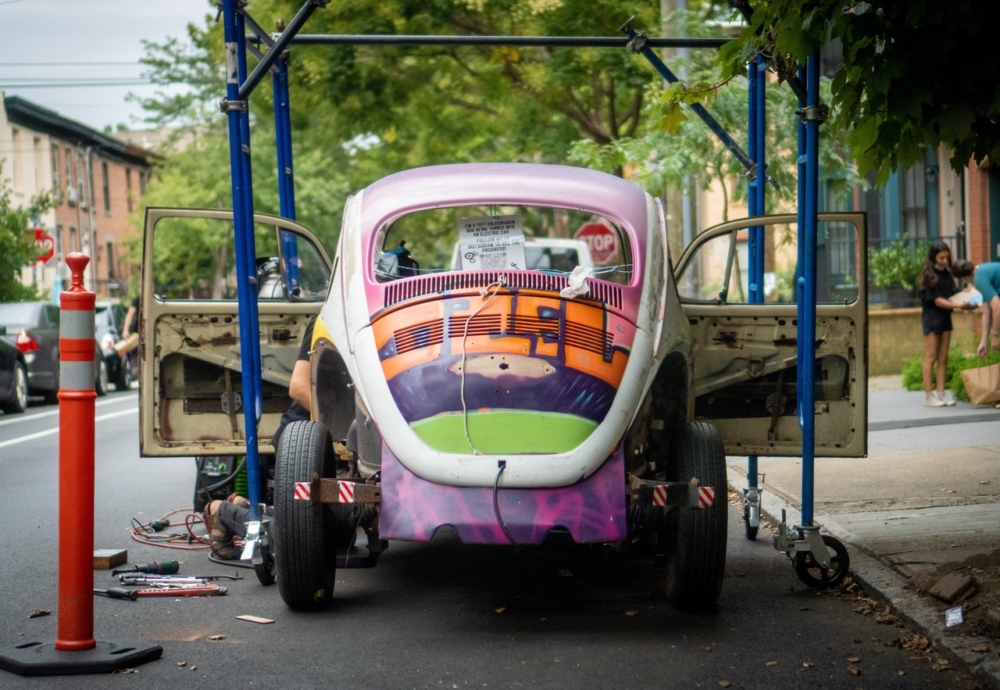 Invention and creativity run in the family. Since Lucas was in diapers, according to Slurzberg, they have been inventing and building gadgets together from a Nerf gun Barbie launcher to elaborate matching Halloween costumes. Slurzberg fostered Lucas’s drive but was stern when it came to working in the garage: “He was taught very young … respect the tools. I don’t childproof, it’s not my style.”

For work, Slurzberg builds interactive technology for pop-up shops and trade shows for the likes of Glade, Chanel, among other clients. As a child, Lucas was able to attend these shows and go behind the scenes to see his father’s work. As he got older, Lucas was able to help out with his dad.

Converting the VW bug into an electric vehicle is perhaps the duo’s most ambitious project yet. The car needs serious restoration. The bodywork needed is not what they signed up for, but they’re up for the challenge. Lucas says, “There’s some nights I go upstairs, and I’m like, this is just painful sometimes … and then I think, well, the end result hopefully will be really cool.”

Through all the ups and downs, Slurzberg says it’s been about the experience for him and his son. “I wanted to empower him to make these decisions,” he says. “I do trust that he’s done enough stuff at this point in his life … which is pretty scary for a 14-year-old that he’s done that much stuff that I listen to him.” 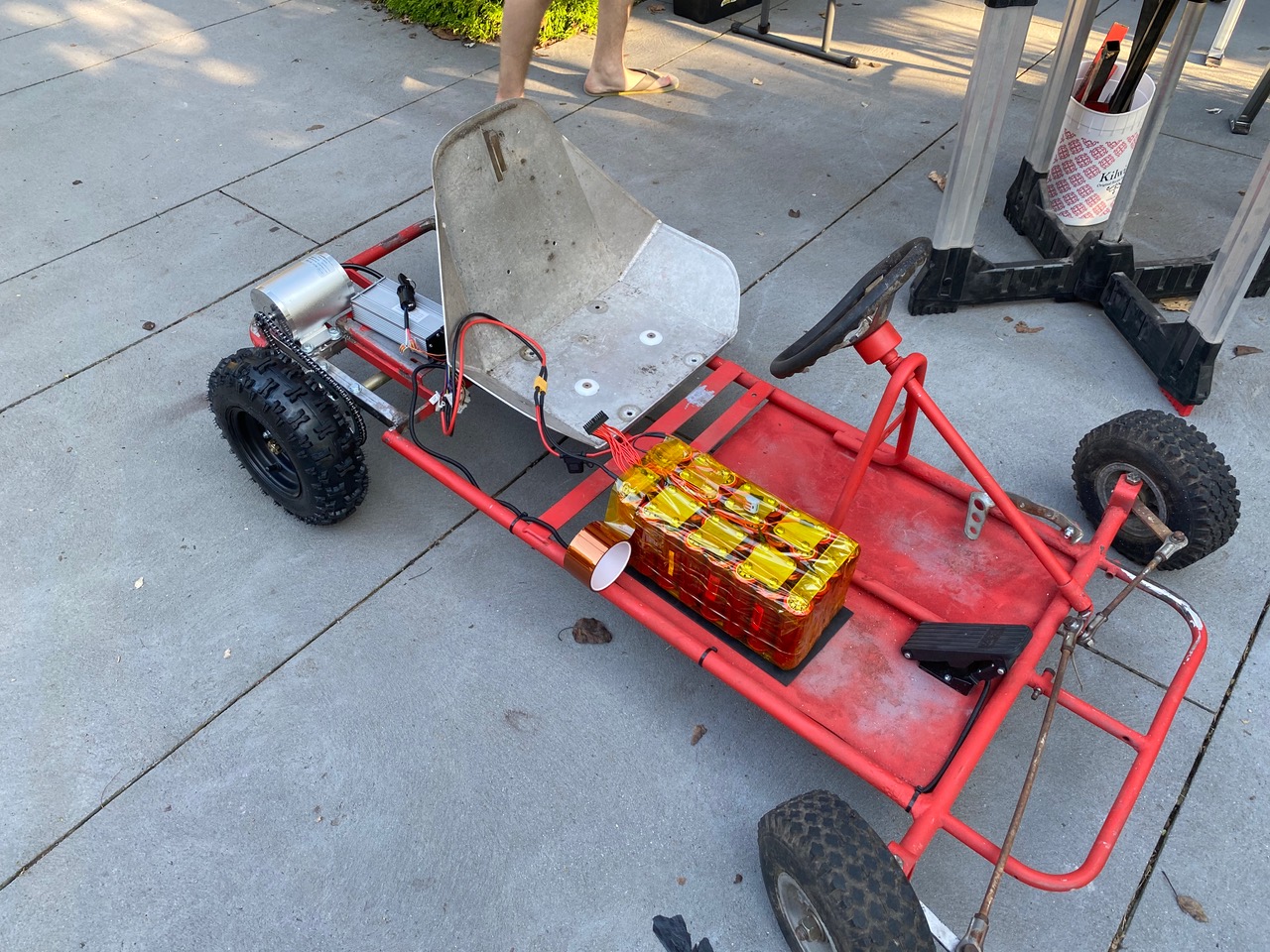 The Slurzbergs goal is to have all the bodywork done by the end of the summer. They will send the bug out to have the interior done and the shell repainted. Earlier this year, Slurzberg asked local artists from the Jersey City Mural Festival to paint the car, which definitely caught the attention of onlookers. But Lucas was hoping for something a little more subtle, so he’s decided to have it painted dark grey.

Of course, nothing goes to waste in this garage. The original custom-made electric motor that was in the ’71 bug will likely become the Slurzberg’s next project. “I really want to convert one of the parking scooters,” says Slurzberg. “I want to stick it on a jet ski,” suggests Lucas. Slurzberg agrees that’s a better idea.

So, be on the lookout for a quiet electric bug cruising around Jersey City and an electric jet ski on the Hudson. 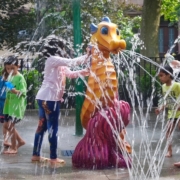 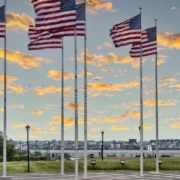 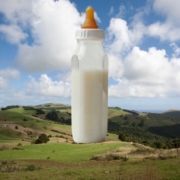