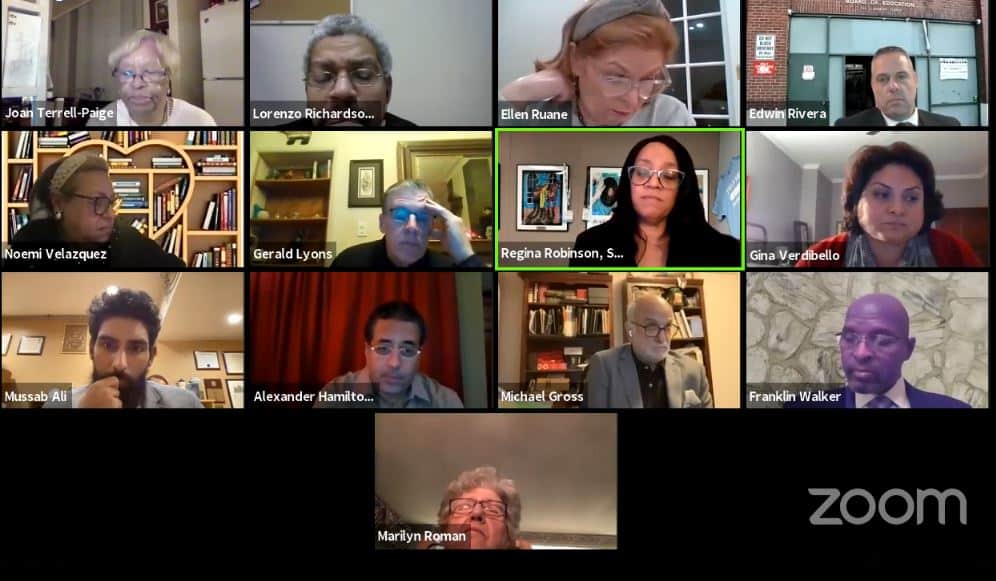 Jersey City Superintendent of Schools Franklin Walker will petition the New Jersey Schools Development Authority (SDA) to allow the Astor Place Community Garden to remain after being notified some uses of the space violate an agreement with the authority.

The space is being used for food distribution, coat drives and COVID-19 testing, vital services during the pandemic where many are out of work and in need, said volunteers, religious leaders and numerous other Jersey City residents who spoke during public comment at Thursday’s Board of Education meeting.

Residents of the Astor Place neighborhood and those involved in the food distribution efforts heard the garden, adjacent to PS 12, was in danger of being closed and gave impassioned pleas to the board and superintendent to prevent a garden closure from happening. Residents said as many as 2,000 people line up to receive food on Saturdays.

Those who spoke in support of the garden said the heavy boxes being given out are filled with fresh vegetables, meat and produce. One former crossing guard said before the community efforts took hold, the lot the garden sits on was “a drug lot.”

Longtime volunteer Sheila Ruiz said the garden is a powerful asset for the community and has become part of the team that is helping families through the pandemic. “I find it appalling that they’re trying to close down a community that’s trying to feed children and families during this time,” she said.

The board took action on the issue after coming out of executive session around 11:30 p.m. by unanimously approving a resolution to support Walker’s petition to allow the garden to remain.

“We are all in agreement with the great things that are happening in the community as a result of the Astor Garden,” Walker said.

The superintendent said he received a letter on Jan. 20 from the SDA, which owns the land the garden is on and rents it to the schools. The letter said “the SDA has learned that the district’s present use of the property significantly violates the terms of the use and occupancy agreement” that was entered into in July 2009. The letter also provides an opportunity to “cure” the violation, Walker read.

Walker said in August 2020, he signed off on a building use form submitted by the BITE organization which “indicated that there would be gardening, food pantry, educational programs and services” on the Astor Place land and the form “was approved under those circumstances.”

“However, based upon the SDA, their indication is that the uses of the property have gone beyond the scope of what was originally indicated in the building use form” Walker said.

The SDA directed the district to remove political signs on the property and a port-a-john in advance of an inspector coming to the space next week to review that these things are done.

Walker’s solution is to “petition the SDA on behalf of the district, the community and the BITE organization to allow the garden to remain and include the current activities as a part of the agreement.”

“One of the key terms that they use and that allows us permission to do that is that it benefits the students,” Walker said.

Use of the garden will be able to continue until Walker submits the petition, but it must operate within the scope of what was identified on the building use form. This means the free food distribution many residents advocated for can still take place. Changes to the form may be needed for COVID-19 testing and coat distribution to continue.

The Evolution of Rolando Lavarro

Council Passes Pay Ordinance in the Dark
Scroll to top