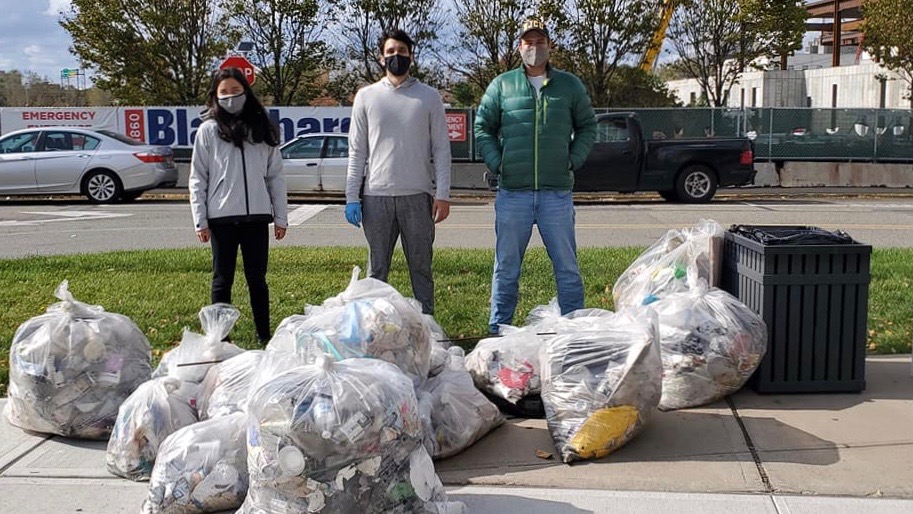 Led by Karam Thapar, a 30-year-old banker with a social conscience and fed up with what they perceive as municipal indifference, a group of Jersey City residents are taking to the streets every weekend. 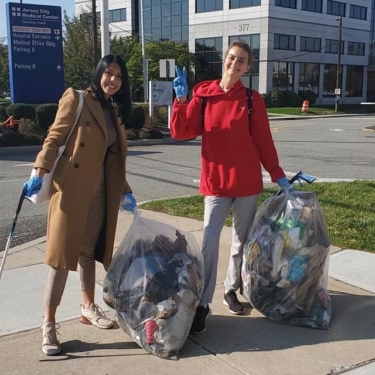 Members of the all volunteer Clean Green Jersey City bring rakes, shovels and plastic bags, using them to haul in accumulated refuse found on streets, sidewalks, curbs and vacant lots.

Thapar, the son of immigrants from India, recalls his parents talking about “trash everywhere” in their native country, and that the problem was “too expensive to fix so everyone just keeps kicking the bucket down the road.”

It was when he was in his early 20s and living in suburban Essex County, Thapar said, that he first became sensitized to out of control debris. “At the time, I was going on nature hikes in supposedly litter-free areas but that’s where I was seeing trash. I remember, it got me enraged.”

A report on the July 2019 website of the Natural Resources Defense Council noted that trash generated around the globe is getting out of hand and that nations, by and large, aren’t keeping up with the pace.

The report cites findings by Verisk Maplecroft, a global risk-assessment and consulting firm, that while the U.S. “accounts for only about 4 percent of the world’s population,” it “generates 12 percent of the planet’s municipal solid waste, better known as garbage,” equating to 239 million tons annually. 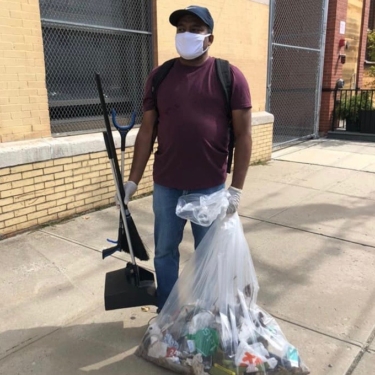 And while China and India outnumber Americans by more than eight times, those two countries produce just a bit more than twice the amount of garbage the U.S. generates, the consultants said. At the same time, they said, Americans “generate more than three times the amount of waste that their Chinese counterparts do.”

Where does our garbage go? As reported by Bloomberg.com, based on the most recent data collected by the U.S. Environmental Protection Agency, in 2018, half of our annual tonnage was buried in landfills while 32 percent was “recycled or composted.”

That same year, Hudson County logged a municipal waste recycling rate of just 22 percent – lowest among the state’s 21 counties. Nationwide, the U.S. recycles 35 percent of its trash. Cities like San Francisco, San Diego and New York are in the forefront of “zero waste” campaigns.

But until governments on local, state and nation levels implement, with or without private partners, resource recovery and other strategies to significantly reduce the volume of trash, Thapar and like-minded individuals will have to struggle on as temporary stopgaps.

Since September 2020, Thapar has found a way to actualize his empathy for the planet’s conundrum through his corporate banking job by guiding clients to environmentally sustainable investment opportunities, helping cities finance clean water projects and providing loans to businesses for planet-friendly improvements. 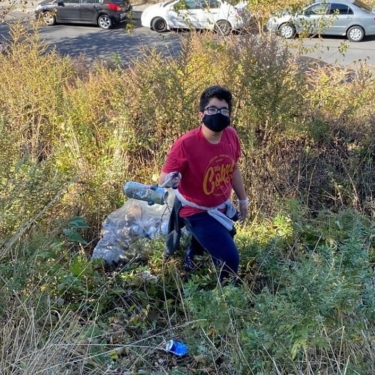 As the pandemic took hold, Thapar was working mostly from home and found himself more focused on his home environment in downtown Jersey City near the Hoboken border.

“I just started clearing trash near where I lived,” he said. Among the piles of discarded debris he found were “single-use plastic containers, fast-food cups, metal containers, soda cans, tons of plastic bags or shreds of bags. Even discarded auto parts, tires or pieces of tires and clothes.”

Neighbors, he observed, were doing their part, too, to help clean up the areas outside their homes.

That’s when Thapar got the idea to up the ante by organizing regularly scheduled cleanups by enlisting residents as volunteer picker-uppers. And he called Ward E Councilman James Solomon for guidance in assembling a plan to “tackle every part of the (Downtown) ward, and, if that succeeded, to expand.”

And so, Clean Green Jersey City/Neighborhood Cleanup became a reality, with social media accounts in that name created on Instagram and Facebook to make residents aware and enlist participants.

Virtually every Saturday and Sunday, from 10 a.m. to 1 p.m., volunteers have shown up to clear and haul away trash mostly from municipal play areas in the Heights (Washington Park, Leonard Gordon Park, Pershing Field Park), in Downtown (Van Vorst Park and Morris Canal Park) and Bergen-Lafayette (Berry Lane Park) but also around the Lackawanna Terminal, Liberty Harbor, Cornelison Avenue and the Powerhouse Arts District. 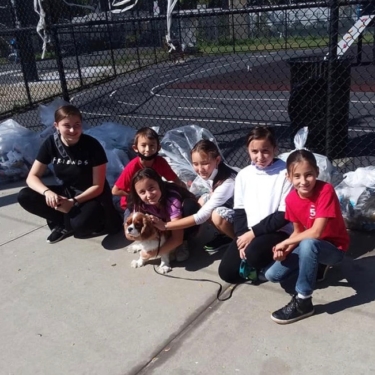 One recent weekend, volunteers tackled Hudson County Richard Rutkowski Park in Bayonne. And discussions are under way with Hoboken’s Green Team to extend cleanups to that city on a partnership basis.

For the balance of this season, cleanups are planned through the end of May. Future spring and summer cleanups will target wider areas near residential properties, land bordering the Turnpike entrance and the Palisades cliff areas in the Heights.

All ages, from teens to moms with strollers, to young adults to grandparents have participated, Thapar said.

In the program’s early stages, Thapar said the city Public Works Department loaned volunteers trash grabbers and other supplies but now designated cleanup teams in the Downtown and Heights “have their own sets” of equipment, but DPW continues to help by collecting large trash-filled bags at cleanup sites.

Still, despite the group’s best efforts, the litter returns.

The city ran a “Stop the Drop” program that enlisted local teens and young adults to volunteer for neighborhood cleanups during the summer but the program is currently on hiatus due to the pandemic.

There have been other citizen-led efforts to clean up the city. Last summer, 13-year-old Sage Lappas started an “Adopt-A-Block” initiative that encouraged residents to collect and dispose of garbage on the sidewalk. Participants provided their own equipment and handled disposal.

Team volunteers are brimming over with ideas.

Steven Evers, who joined the team last year “to prevent litter from ending up in the water, harming wildlife, and causing airborne microplastics dust that harms our health,” wants the city to ensure “that all trash cans have a lid or covering to prevent the wind from blowing trash out of them and to prevent trash from spilling out if they topple over.” He also wants the city sweeper “to regularly clean high-litter areas.”

Rebecca Pustizzi, who got involved because of what she characterized as “the amount of trash throughout our whole neighborhood,” says the city needs to ride herd on its sanitation contractor whose employees “throw trash all over the streets,” plus enforce litter laws and take action against owners of “unkempt” properties.

And Amanda Luciano, who, as a new homeowner, felt she “had to do something to give back to the community,” agreed with her teammates that the sanitation contractor is “not tidy at all” and that a lot of trash “is left on the ground.” She also wants to see “more trash receptacles” placed around the city. “I see all the development that’s taking place but I’m waiting to see if waste management could be taken more seriously by the city,” she says. “It’s a quality of life issue.”

Get Free Beer for a May Vaccination, Capacity Limits Loosened
Scroll to top