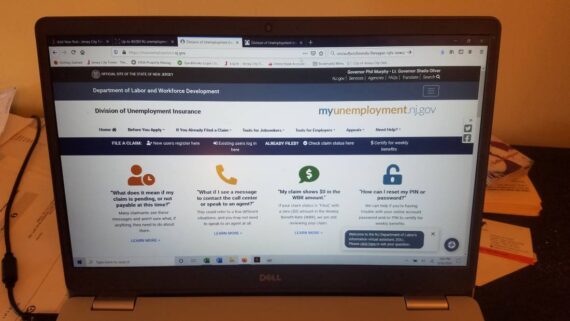 “Just to not hear anything, just to not get any relief, it’s so frustrating,” Cararo said. “As you can imagine, getting close to a year, bills are piling up, and piling up and piling up.”

“We completely empathize with the frustration and uncertainty each worker felt, and in some instances, still feel,” said Asaro-Angelo. “This is not a situation any state, no matter how well-funded or how modern their resources, could have prepared for,” Asaro-Angelo said.

“It’s been a difficult task. We’re all frustrated at times, so we look forward to hearing from you, sir,” Sen. Paul Sarlo said.

In a hearing focused more on the department’s flawed performance during the pandemic than its budget, Asaro-Angelo admitted the state computer system handling applications does need a serious upgrade. But he pointed to overly complicated federal unemployment laws — red tape — as the real problem.

“I’m not trying to deflect blame, I’m trying to talk about the facts. The most modernized systems in the country are having the exact same problems we’re having,” Asaro-Angelo said. “They still can’t make systems that work because the regulatory system that underpins it is so complicated.”

Asaro-Angelo says the department’s spending the $4 million it received earlier this year on outside call centers to help speed claims processing. But lawmakers complained that even callers who get through have issues.

“Once they get through, they get someone on the phone and sometimes it’s obvious the person has absolutely no idea what they’re talking about,” said Sen. Declan O’Scanlon.

“Every day we have calls with our vendor, Navient, about the call center, about training the staff, about what script they’re using” Asaro-Angelo said.

He also noted problems also arise because call center staffers can’t approve claims — they can only refer applicants to trained processors. But the state’s paid out $15 billion to 1.36 million people since the pandemic lockdown threw so many out of work in March. Still, it takes two to three weeks to pay a simple, uncomplicated claim.

“The state’s still trying to staff up and train people to handle all of the crush of unemployment. Again, it’s a complex problem. A lot of people seeking benefits, putting a crush on a system that was already a little bit handicapped, in the sense that it was using outdated technology that has been identified as problematic years ago,” said NJ Spotlight News Budget and Finance writer John Reitmeyer.

“I’m so angry, I can’t even put it into words. That you pay into a system your entire life and now they just keep telling me, ‘your claim is not payable at this time,’” Cararo said.

A bill requiring the state auditor to review New Jersey’s unemployment division is making its way through the legislature.

Meanwhile, Tuesday was the last official budget hearing. Lawmakers now have until Oct. 1 to hammer out a state budget.

Laptop Shortage, Lack of Internet Access Behind Bumpy Start to Remote Learn...
Scroll to top
Subscribe to Our Newsletter