By Jersey City standards, the event looked to be a big deal. It would feature a famous rapper, a good portion of the Hudson County Democratic Black Caucus, and a cause:  mentoring Jersey City teens.  But by 3 p.m. yesterday, Mayor Fulop had cancelled the gathering, in apparent response to questions raised about the event’s “celebrity guest,” rapper Tip “T.I.” Harris, who was set to arrive in the city with a lengthy rap sheet and beset by fresh charges of abusing women.

According to an invitation posted on Instagram, Monday’s event was to take place at the city Department of Recreation and Youth Development and was to include a coterie of city officials, including co-host and Ward F Councilman Jermaine Robinson, Health and Human Services Director Stacey Flanagan, and City Council President Joyce Watterman. State Senator Sandra Cunningham and Assemblywoman Angela McKnight were also listed as “special guests.”

Had the mayor not pulled the plug at the last minute, Harris would have appeared at the event under a cloud of controversy. In March, a Brooklyn attorney asked authorities in California and Georgia to open investigations on behalf of 11 people allegedly victimized by Harris and his wife, Tameka, between 2005 and 2018. According to the attorney, the alleged victims were subjected to sexual abuse, forced ingestion of illegal narcotics, kidnapping, false imprisonment, intimidation, assault, and harassment.

The attorney, Tyrone A. Blackburn, said that they were inspired to come forward by Sabrina Peterson, who alleged in a January that Harris had “put a gun to [her] head in front of children.” Said Peterson, “[The] sad part about … being a black woman is this! The public praises our predators.”

In a statement to the media, Harris’s attorney wrote, “Clifford (T.I.) and Tameka Harris deny in the strongest possible terms these unsubstantiated and baseless allegations. We are confident that, if these claims are thoroughly and fairly investigated, no charges will be forthcoming.” He called the charges “a sordid shakedown campaign.” 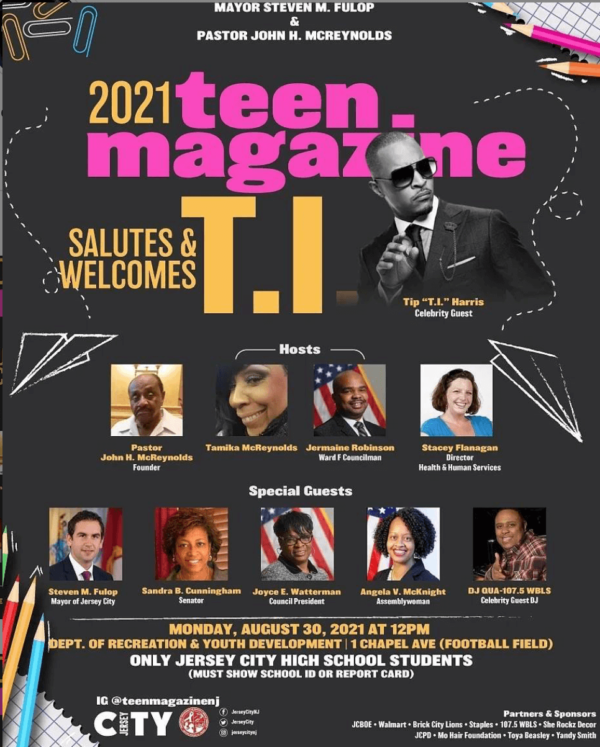 Harris has spent time in state and federal prison on charges ranging from drug dealing to weapons possession. In 2008, Harris pled guilty to federal weapons charges arising out the possession of three machine guns and two silencers.

His treatment of women has been an ongoing issue. He was criticized for annually taking his daughter, Deyjah Harris, to have her hymen checked to confirm her virginity. Speaking of Hilary Clinton in 2016, he said, “I can’t vote for the leader of the free world to be a woman” and suggested that she might “set off a nuke” because “women make rash decisions emotionally.” In 2003, he was punished for the battery of a female sheriff deputy.

In 2015, the IRS filed liens on Harris’s property for $4.5 million in unpaid taxes.  In 2020, Harris was charged by the SEC  in connection with his involvement in two fraudulent initial coin offerings, charges that were later settled.

Six hours before the mayor’s cancellation, Jersey City Times had contacted each of the event’s participants and a group of  local candidates for office asking for their views on the gathering. None of the participants, including the mayor, responded to our inquiries.

However, several local candidates and activists did, and they were highly critical. City Council-at-Large Candidate June Jones called the honoring of Harris “appalling.” Another City Council at-Large candidate, Elvin Dominici, slammed the mayor for bringing in people with “sketchy backgrounds … to boost his national profile.”

Frank “Educational” Gilmore, a candidate for the Ward F City Council seat, allowed that Harris was entitled to the presumption of innocence but added, “I wouldn’t have done it. I don’t think this is the kind of message we need to be giving kids at this time.”

Also “saluting and welcoming” the rapper would have been “2021 Teen Magazine” and Pastor John H. McReynolds, formerly of Mount Olive Baptist Church. According to Partnership for a Healthier JC, McReynolds founded The Teen Magazine Literacy Program to give teens “a safe haven to produce a magazine, illustrating how their voices are relevant and can serve as a vehicle for positive change in Jersey City.”

Robinson’s co-host for the event was slated to be McReynolds’s wife, Tamika, author of the book From Federal Prison to First Lady, which tells the story of her affair and involvement with former  Newark mayor Sharpe James, which led to her conviction and a nine-month federal prison sentence.

Op Ed: Rental Assistance is Being Held Back from Jersey City Residents
Scroll to top