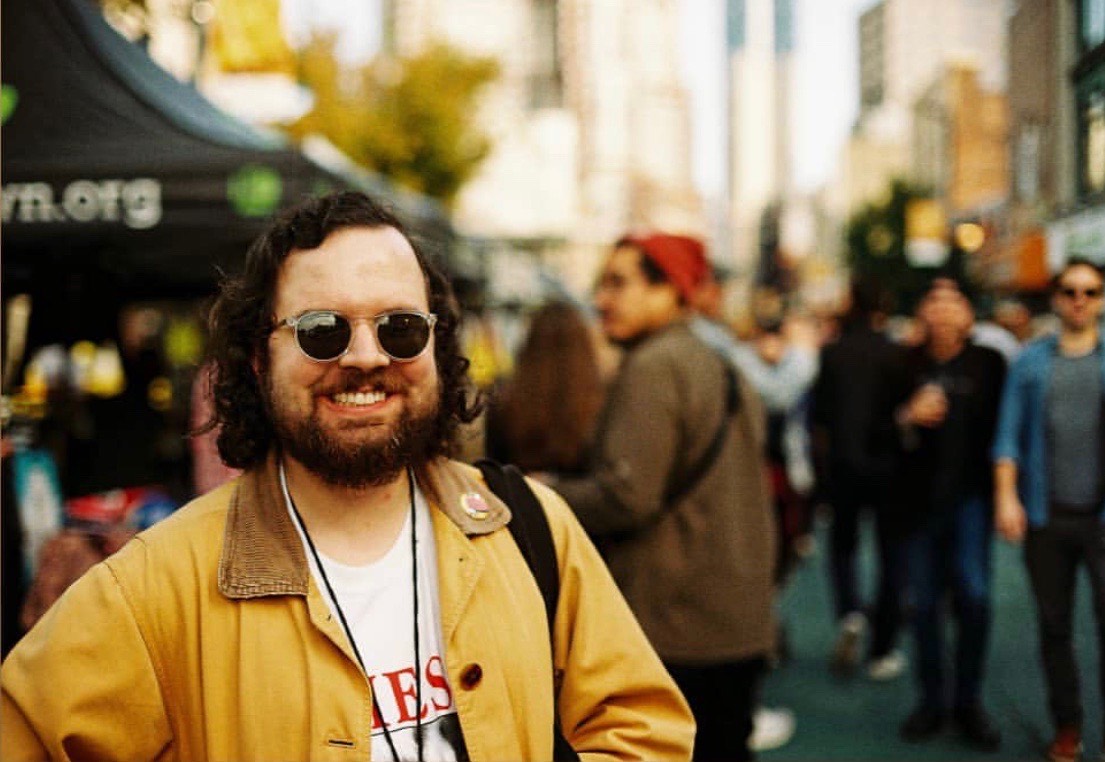 JCT: Tom, you’re a podcaster, a Radio DJ, a music journalist, a bootleg archivist, and an indie rock tastemaker. It’s hard to keep up with you! Can you give us a rundown of all of the music projects on which you’re working?

Gallo: My main project is Look At My Records!, a weekly podcast where I interview independent artists and ask them to curate playlists based on records from my personal record collection. Last year, I launched the Look At My Records! website, which features reviews, premieres of new music, curated playlists, and other music-related content. I also host a radio show called “Local Fidelity” every Saturday at 2 p.m. on Radio Free Brooklyn. I curate The McKenzie Tapes, an online cassette archive that features hundreds of digitized live performances from the 1980s and 90s.

JCT: Why did you choose to live in Jersey City instead of New York City especially since New York has a fervent and nationally recognized music scene?

Gallo: I spent my teenage years in Verona, NJ, and eventually moved to Hoboken in 2013. Originally, my work led me to Jersey City in 2015, and I have loved being part of the community ever since. I’ve met so many unique and interesting people over the years, and I’ve connected with so many talented artists and musicians. It was appealing to me to set my roots in a growing community like Jersey City instead of moving to somewhere like Brooklyn where the music scene is already well established.

JCT: Let’s talk about Look At My Records!. This is a podcast, a website, and essentially a taste-making machine. How would you say that LAMR is different from other taste-making sites, say, like Brooklyn Veganor Gorilla Vs. Bear?

Gallo: The goal of Look At My Records! is to give a voice to independent artists that you wouldn’t necessarily read about anywhere else. I really want to provide a platform to artists that I believe are creating great art and are being overlooked by mainstream music outlets that are more focused on artists that already have an established fan base. There’s definitely a focus on my community, but the site does feature artists from all over the globe.

JCT: The McKenzie Tapes is your project that chronicles great live bootlegs that were recorded up to forty years ago. Can you tell us how this started and a little bit about the bootleg community that you’ve tapped into for this project?

Gallo: It all started in the fall of 2018 when I received a Facebook message from a guy named David McKenzie. We were both active participants in the “Maxwell’s of Hoboken, New Jersey” Facebook group, and he reached out to me to see if I’d be interested in digitizing his cassette collection of live recordings. His collection consisted of mostly recording from Maxwell’s, but it also featured other NYC venues in the ‘80s.

He sent several boxes of tapes about a month later, and I simultaneously started diving into the online community for cassette digitizing. I quickly learned that I had to get some high-quality decks and equipment, and that it’s more challenging than it seems. There’s so much to learn about it and always more to archive. It’s been great making friends in the bootleg community, many of whom have shared their own tapes with me to digitize. It’s also been extremely rewarding to preserve this part of music history. It’s something that I take immense pride in doing.

JCT: What are some of your most rare and prized shows that you’ve archived with McKenzie Tapes?

Gallo: I think the coolest tape in the collection is a series of two Sonic Youth shows at Maxwell’s in Hoboken from June 9 and 10 of 1988. The band played these gigs right before recording their magnum opus, Daydream Nation, in July of 1988. Their sets on both nights previewed songs that would appear on Daydream Nation, including “Candle, “‘Cross the Breeze,” “Teenage Riot!,” “Total Trash,” and “Totally Trashed.” Many of the songs sound a bit different from the recorded versions on the album, so it seems like they were still working them out before heading into the studio. It’s a very cool piece of indie rock history.

JCT: “Local Fidelity” is your extremely popular show on Radio Free Brooklyn. What inspired you to do a show that focuses on local music only?

Gallo: Local Fidelity originally started as just a live version of the Look At My Records! podcast. Eventually, I realized that instead of having another forum for artist interviews, it’d be more fun for the audience (and myself!) if I just focused on playing a full hour of all-local music. I’m very active in the music community in Brooklyn and Jersey City, and this is the music that I enjoy listening to in my free time anyway.

JCT: Music scenes can be cliquish and competitive, and a lot of times artists from one city won’t support artists from other cities or scenes. Since on your “Local Fidelity” show you feature artists from all over the tri-state area, do you see this show as a vehicle to help the cross-pollination between scenes?

Gallo: Yes, it totally helps to bring together music communities from the area. On “Local Fidelity” and through Look At My Records!, I feature artists from both New York and New Jersey, since I feel like I operate between these two scenes. For me, it hasn’t been difficult to do, and I enjoy introducing Brooklynites to New Jersey bands and New Jerseyites to Brooklyn bands. For instance, it’s been cool to see Brooklyn bands like Forever Honey, Big Bliss, Looms, and New Myths play here in Jersey City over the last few years, and it’s always cool to see Jersey bands like Dentist, PYNKIE, Joy Cleaner, and Shred Flintstone play at places like Our Wicked Lady and Alphaville in Brooklyn. I kind of view the greater New York City area as one big music scene, so a lot of times I don’t even really think about the distinctions between the two.

JCT: Are there other Jersey City outlets which you think promote this kind of camaraderie between Jersey and Brooklyn?

Gallo: I think venues like Pet Shop do a great job bringing in bands from across the river. “Dancing Tony” and Corey Zack also put so much work into organizing so many incredible events that feature bands from here and New York.

JCT: Since the scene in Jersey City is so small, the cultural vacuum of Brooklyn pulls out a lot of creativity from our town across the river to NYC. Do you see this as a challenge for Jersey /city to have its own scene since all the talent gets sucked out to NYC?

Gallo: It’s definitely a challenge especially with the recent closure of FM Bar, but it’s a positive, too, in that it opens up opportunities for other spaces to fill that live music vacuum. For instance, right before the pandemic hit, Dancing Tony and Corey Zack organized a gig in the space above Barcade, which unfortunately had to be cancelled due to the coronavirus outbreak. I foresee more gigs like that happening around town once the pandemic is in the rearview mirror. There’s no shortage of talent in Jersey City as great bands and artists like PYNKIE, Tom Barrett, CR and the Nones, Emergencies, Shred Flintstone, Adrian Danon, Sean Kiely, Diana Zinni, Best Hit TV, Debra Devi, and so many more live and make music here. Also, I think as long as White Eagle Hall is here to serve as an anchor, small spaces will sprout up around it and/or current bars and spaces will start hosting live music events to supplement their calendar.

JCT: In the mid-late aughts, one of the exciting things going on in JC was all of the pop up shows and “secret” house party shows. It gave the scene such a good, edgy feel. These shows were filling the void of a proper music venue (like Maxwell’s) being situated here. Now that JC has established venues like Monte Hall and White Eagle Hall, what do you think is the status of live music in Jersey City both pre- and post- COVID?

Gallo: I think those pop-up shows are going to make a bit of a comeback, and I do think the fact that a solid mid-sized venue like White Eagle Hall is here will lead to more spaces hosting live music. Similarly, the Double Parked Festival that Pet Shop and The Archer organized was a blast! Those are both prime examples of the type of stand-alone live music events that I think are going to become more common.

JCT: What have been some of the exciting aspects of our local music scene over the past three years, and will that change post pandemic?

Gallo: I’m hoping that live music will return as strong as ever after the pandemic. People are craving it, so I think it’ll be in high demand. During the pandemic, there were more outdoor shows at the Harsimus Cemetery, and I think those should continue over the summer. People love enjoying music outdoors, and it’s cool to experience more intimate outdoor shows like the ones that were happening there. I have faith that 2021 will bring about a resurgence of this and that the community will continue to find creative ways to build spaces for people to connect through music.