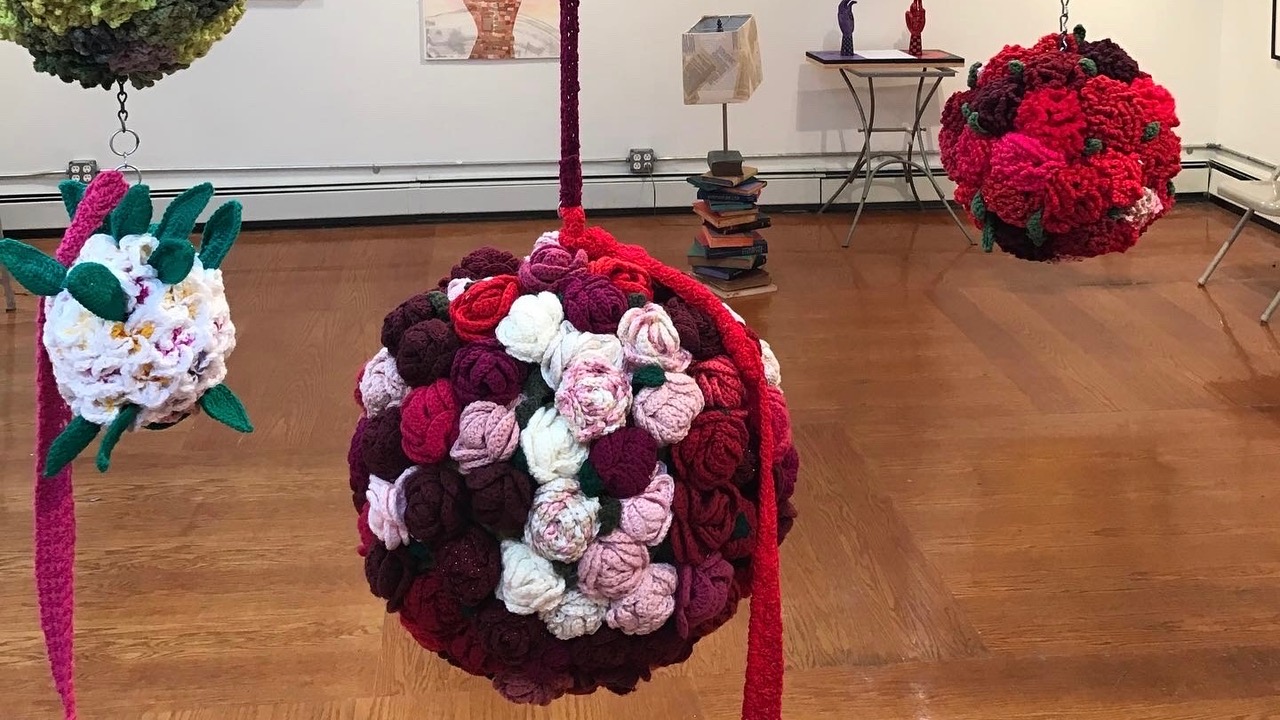 On a dead-end street in an ignored corner of McGinley Square, a cardinal has landed. That its arrival had long been anticipated does not make its touchdown any less impressive. This is an unusual bird, even by the vivid standard of cardinals, those showy backyard visitors. Its body is composed of hundreds of torn strands of gingham fabric. A beach blanket could fit between its wingtips. Should you stand on a metal platform and turn away from the sculpture — as you’re invited to do — it’d look like those giant wings are yours. 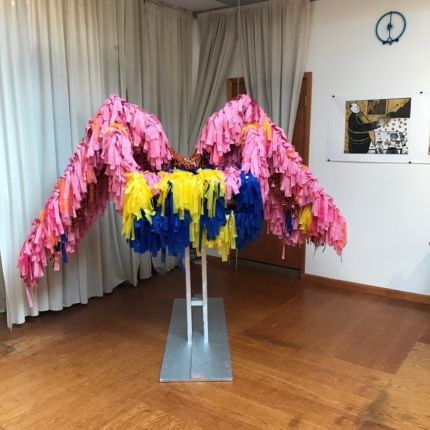 The bird is the fabrication of Bayard, who is, by now, an old hand at turning the back room at 34 Dekalb Avenue into a fantasyland.  Like much of his work, the sculpture feels, simultaneously, alien and protective. He’s chosen his avian avatar wisely. The cardinal is the foremost among the Angry Birds, true, but according to long tradition, it flutters by when angels are near. Here in Jersey City, those go-betweens from the spirit world have had work to do. Many of us have lost someone. For awhile, it looked as if we’d lost EONTA Space.

But after years spent in pandemic limbo, the bright and cheerful art space in the low building at the end of a residential cul-de-sac is back in operation. Bayard will open the cyclone-fenced gates to EONTA Space at 6 p.m. tonight. He’s calling the comeback show “Troublemakers,” and the artists he’s riding with on this voyage are, in the Jersey style, idiosyncratic and stubbornly dedicated to personal visions. But the prevailing tone of the group show is one of consolation. A cardinal is flying by. Angels may not yet be on the ground in Jersey City, but we trust they’re somewhere in the vicinity.

Circumstantial evidence of guardian spirits is present throughout the show. Julie Allen embroiders a tiny “Outfit for an Angel,” complete with little red espadrilles, into a framed piece of vellum; she’s even stitched the fifty-two cents it took to buy the clothes into the work in softly fraying fabric coins.  Was this an ensemble for a lost child, or does it wait for a child to inhabit it?  Medicating angels hover over the show. Chuck Nitzberg gives us a portrait of a man assembled from Band-Aids of different sizes. He’s an amalgamation of wounds, and his posture betrays the beating he’s taken, but he’s still standing. Michelle Mayer’s oil-painted Black Lives Matter protester drops her medical mask just a bit to show us the determination and pain on her face. Cheryl Gross’s female pugilists back up Mayer’s fighter with a similar righteousness; “I will either find a way or make one,” reads a hand-lettered inscription tucked into an illustration. Then there’s EONTA favorite Andrea McKenna, whose distressed, spectral figures in rust-brown and institution-green paint stare back at us from the bardo of her imagination. McKenna’s liminal zone is a place of longing and resignation to fate. Her characters would send us a cardinal, if they only could.

McKenna is the curator at Art House Productions, which, though large by the standard of Jersey City cultural institutions, remains an independent operation. Other local curators and gallery-runners have thrown in their lot with the “Troublemakers,” too. Both Jim Pustorino and Ann Trauben of Drawing Rooms make their presence felt: Pustorino contributes a large, lively, and enveloping piece in pencil and acrylic on Denril film, while Trauben hangs bluejay-blue circles of pipe cleaners on the wall, evil eyes meant to ward off invasive pathogens. Alpana “Tejaswini” Mittal, a vice president at ProArts, continues to work wonders with beads, arraying them in rows and zigzag patterns until they generate the illusion of the supple, melting quality of textiles. SMUSH steward Katelyn Halpern, fresh from her thoughtful, wounded solo piece at NJPAC, dances on film with a houseplant and a mannequin with a red knitted mask pulled down over her head. (She’s also stitched an Oedipal joke into a small piece of fabric she’s thumbtacked to the wall; troublemakers are mischievous sorts.)  Bruno Nadalin of the JC Print Room haunts the exhibition with an etching of a needle-steepled, coal-black church, a dark heart throbbing in the midst of an impassive city. 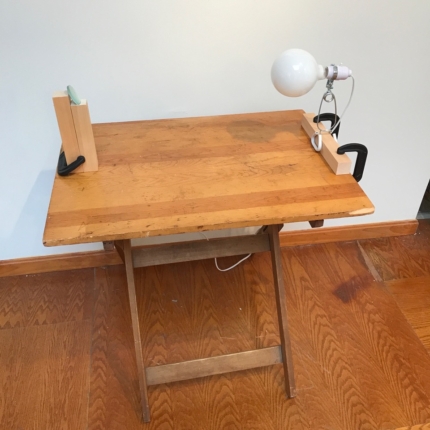 Many of the organizations these curators and community leaders represent — and at least one individual artist featured in the show — are beneficiaries of the new Arts and Culture Trust Fund.  Which raises an important question with implications that go well beyond this show: can an artist receive public money and remain a troublemaker?  After all, in order to make good trouble, it’s imperative that a person be willing to risk unpopularity, and perhaps even make herself a nuisance in the name of her principles. Does an infusion of municipal cash attenuate the will to provoke the municipality?  “Troublemakers” suggests that the answer is a provisional no — as long as arts leaders hang together, keep talking and supporting each other, maintain their independence, and create space for weirdness. The show, then, is a kind of convention, and a reminder, too. In a tricky time for the scene, Bayard has summoned the troublemakers to EONTA Space, a troublemaker’s Batcave if ever there was one, and reminded them of their responsibility to advance the causes of disobedience and productive disorder. 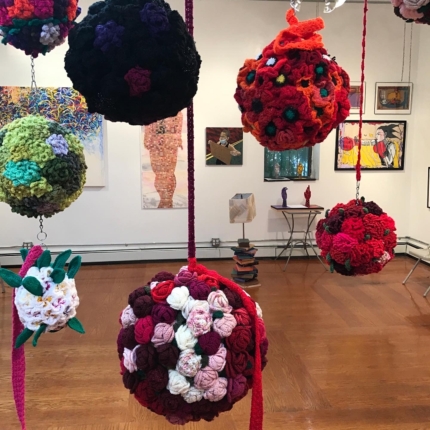 They also need to continue to make room for their fellow troublemakers. Jill Scipione, for instance, transformed Drawing Rooms with her garlands of fabric roses in in 2019, and she’s got the most eye-catching piece at EONTA, too. Plush spheres of textile flowers dangle from brightly colored yarn chains, right in the middle of the room. They’re bouquets from some playful deity, dropping down from the heavens to (softly) bonk the heads of passersby. Megan Klim has shown her encaustic motherboards at ART150 and Village West; here, her squares of ink, wire, and porcelain look like cake-slices of machinery caught in a volcanic eruption and unearthed by archaeologists. Richard Isgard’s poised show at Outlander Gallery was one of the highlights of an austere pandemic-winter season, but here, in rowdier company, and on the cusp of summer, his adherence to a wholly personal vision gives his gouaches a feeling of passive resistance to a brutal world. The electrifying squiggler NOHI, star of shows at Issyra in Hoboken and Hamilton Square Condominiums, immerses the viewer in a dense swarm of heart shapes and colored arcs of acrylic. Barbara Seddon’s beautiful, jagged assemblies of linocut shapes have lain in wait at the Elevator show and the Majestic Condominiums. You can cut your fingers on them in “Troublemakers,” too.

But as so often seems to happen in tightly assembled group shows, my very favorite pieces were done by a young artist whose work I don’t know well. Kubra Ada’s trio of marbled paper images are beautifully balanced, nuanced, hypnotic, and near-organic: they seem to bloom and swirl before your eyes as you’re looking at them. Work as elegant as this does not, superficially, seem to be coming from the brush or the palette of a troublemaker, so I’m pleased to see that Bayard and company have recognized the turbulence beneath the placid surface. They’ll make a recalcitrant out of her yet. That’s the kind of thing that happens at a troublemaker’s clubhouse, on a dead-end street, in an ignored corner of McGinley Park: one populated by cardinals and ghosts, and the residue of angels, and willful creators following no other imperative but than their artistic impulses. The neighborhood, no doubt, is thrilled to have EONTA Space back. Hudson County should be, too.

Man Shot in Neck in Bergen-Lafayette