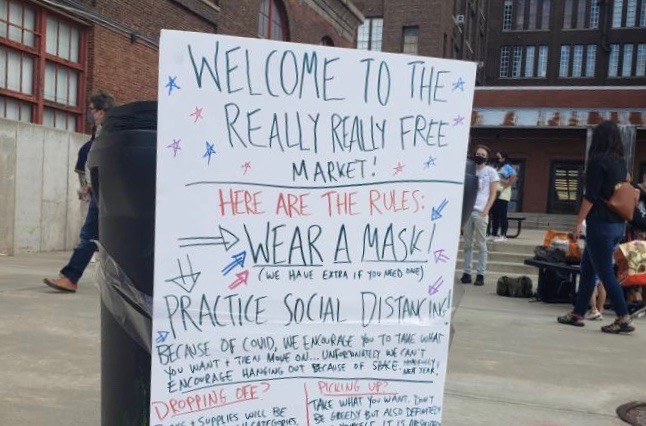 On September 12, members of the Jersey City community gathered on the lawn of Mana Contemporary to shop for art supplies and books. The most notable thing about the makeshift community market? Everything—from cans of paint to children’s books to balls of yarn—was free.

The event, which was socially distanced but well attended, was organized by local artist Amy Wilson. She lives in the Lincoln Park area of Jersey City, and is well known for her crafts inspired by New Jersey politics, including patches embroidered with an infamous quote from Bob Menedez’s corruption trial.

For her the gathering was both a “huge garage sale where everything is free” and a form of mutual aid.

“The idea is really to eliminate waste,” Wilson said. “Instead of things going straight to the dumpster, let’s instead find them new homes and connect them to people who might be in need.”

The West Side event was advertised as a “Really Really Free Market,” referring to a nationwide movement to counteract capitalism and consumerism through sharing resources.

Such markets are not affiliated with any larger organization, and individuals are encouraged to start them anywhere and at any time. Often services are shared in addition to goods such as yoga lessons, haircuts, and guided crafts.

The movement has taken root in many cities across the United States from San Diego to Minneapolis, but this is the first time it has appeared in Jersey City.

“In Jersey City, things are getting more and more expensive,” Wilson said. “There’s a lot of things that are off limits to a lot of people, so it’s nice for people to come here and not have to worry about money.

She views the event as a small way to make art more accessible to people who have ideas for projects but are held back by the cost of supplies.

“Art has been so important during the pandemic just in terms of giving people something to do and keeping them sane,” said Wilson. “For me, creating things has always been a very soothing way to unwind and connect with myself. And I would love to see more people getting the opportunity to do that.”

For Lucka Joseph, a Jersey City resident who went home with a collection of romance, mystery, cooking and poetry books, the market was also a chance to build community and make friends.

“The whole day I was in a better mood,” he said. “I found amazing books that I’ll most likely spend the whole year reading. And the fact that there were other people there too made me happy.”

Wilson says that she would love to make the Really Really Free Market in Jersey City an annual event– and after the pandemic, she hopes the market can also feature live music and food trucks.

“It would be so great to keep helping everyone find a home for things in a way that’s good for the environment,” she said. “It’s really about generosity and sharing and creativity– and encouraging people to be adventurous.”