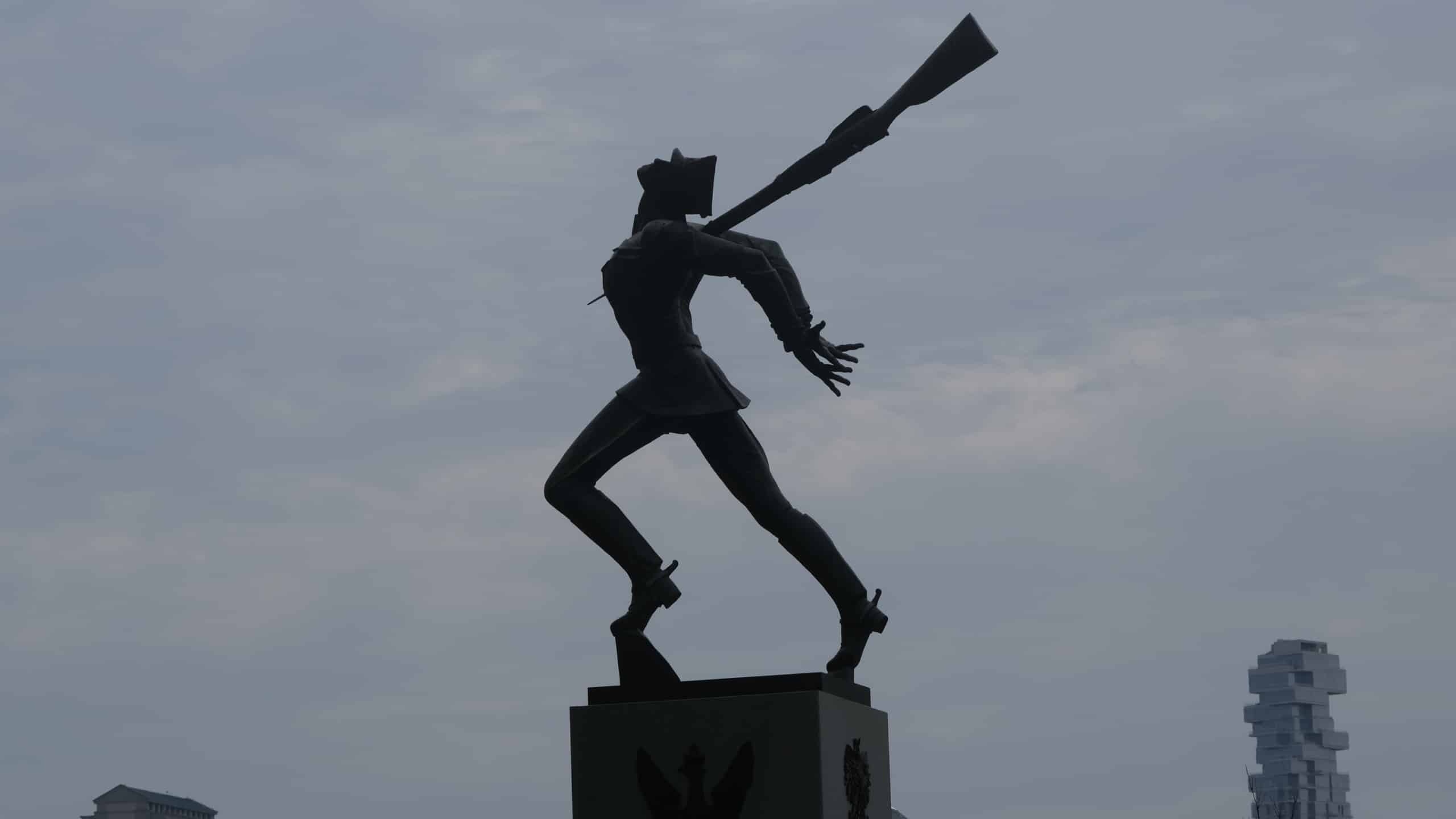 Recent struggles over historical monuments, such as Civil War generals or Christopher Columbus, remind us of the importance of history.  But no monuments related to World War II were challenged, except one:  the Katyn Massacre monument in Jersey City. It commemorates the killings of 22,000 Polish POW officers in 1940 by the Soviets who invaded Poland on 17 September 1939. The statue representing a Polish officer stabbed in the back by a Soviet bayonet is dramatically situated on the shore of the Hudson River with the New York World Trade Center, and now Freedom Tower, as a background.

Comments were circulated that the monument is too grim and brutal and gives Russia a bad reputation.  The mayor and his real estate backers wanted to remove it and replace with outdoor restaurants more suitable to a consumption era. This was successfully fought off as well as a plan to move it to a drainage area. Now efforts continue to obscure it with trees and plastic structures.

Commercial interests want to destroy or overshadow the Katyn Massacre monument because they value ordinary life and its rewards.  But the monument reminds us that this ordinary life sometimes requires warrior virtues for its defense. Military pursuits in defense of freedom result in losses and sacrifices and those must be honored by succeeding generations.

The monument is doubly relevant today because it symbolizes history that is largely repeating itself in the current war in Ukraine. Katyn symbolized not only the execution of Polish POW officers but all Soviet murderous policies toward Poland of this time period. 1940 was also the beginning of Soviet deportations of 1.5 million Polish citizens to Siberian gulags where the majority perished from hunger, cold and disease. In preparation of the invasion, communist party activists assassinated Polish officers and government officials in Eastern Poland after Germany invaded Poland on 1 September 1939.

These policies not only exterminated the Polish elite but more importantly prepared the ground to enslave the whole country.  The Soviet Union carried out referendums where local residents supposedly voted for incorporation of 40 percent of Polish territory into the Soviet Union in October 1939.  In the postwar period, it imposed the oppressive Soviet communist regime.

A similar Russian strategy is pursued by Putin in Ukraine. Russian armies invaded with prepared lists of Ukrainian government officials to be arrested and often murdered.  The Bucha massacre victims had their hands tied in the back and were shot in the head precisely the same way as the Polish officers had in 1940 in the Katyn Forest.  A Russian policy of total destruction of urban intelligentsia with its indiscriminate bombings of cities is also just a clearing of the field for “Little Russia” that Putin wants to put in its place.  About 1.2 million Ukrainians were sent to “filtration camps” or to the Russian Far East and children are separated from their parents. The Russian Army is preparing referendums to “vote” for an incorporation of Ukrainian regions into Russia. It is instituting its own currency, schools, administration and passports in occupied territories. Putin wants Ukraine that is a failed state, dependent on Russia and compliant with Putin-imposed ideology of “gathering of Russian lands.”

The significance of Katyn lies not only in the evil crime that it symbolizes but also in its cover-up.  While the Germans discovered mass graves in spring of 1943, all the physical evidence pointed to the time of death in April 1940 before the German invasion of Russia in June 1941.  Despite forensic evidence, the Soviets maintained their denial of guilt throughout the postwar period and only Gorbachev admitted it in 1990 due to relentless demands.

Today Putin is denying obvious facts about his army’s activities in Ukraine. But Russian crimes cannot be hidden due to satellites, social media and foreign journalists. Every day we are confronted with images of death and destruction that are not so far away and affect families and friends of Ukrainians who live among us. Russian denials only make them look hypocritical and malicious.

More painfully, the Western powers also upheld this Katyn lie, even after World War II when the Soviet help in defeating Germany was no longer necessary. Most governments in the West wanted to have good relations with powerful Russia, to trade and have its cooperation on their pet projects. Others believed that Russia was entitled to its own “sphere of influence” regardless of what crimes it perpetrated there.

So this is also true today that various Western governments, particularly Germany and France and influential individuals, want to return to business as usual with Russia.  They desire to maintain trade and energy exchanges, but most importantly old stable geopolitical relationships including an understanding with Russia at the expense of its smaller neighbors.

Thus, today’s war in Ukraine reminds us every day how relevant the unique Katyn Massacre Monument is and its brutal lessons of history.  We need a memorable monument as a protest against total warfare with its unbridled violence and the denial of human dignity and memory.  It was experienced not only by the Poles but many others and by Ukraine today.  That’s why the Katyn Massacre monument is so important not only to commemorate Stalin’s crimes against Poland but as a warning that such crimes are possible against anyone if governments have unchecked power, ideological blinders,  and no moral restraints. We need to be vigilant and defend our freedoms and commemorate those who were killed.  That is why Jersey City should be proud of the original and striking Katyn Massacre monument, not seek to diminish its message of freedom and its price.

Lucja Cannon has written articles about Russia and Eastern Europe in newspapers and journals.  She holds a Ph.D.  from Columbia University in international relations.

In Fight Against Commercialization, Park Preservationists Champion a Beach for...
Scroll to top