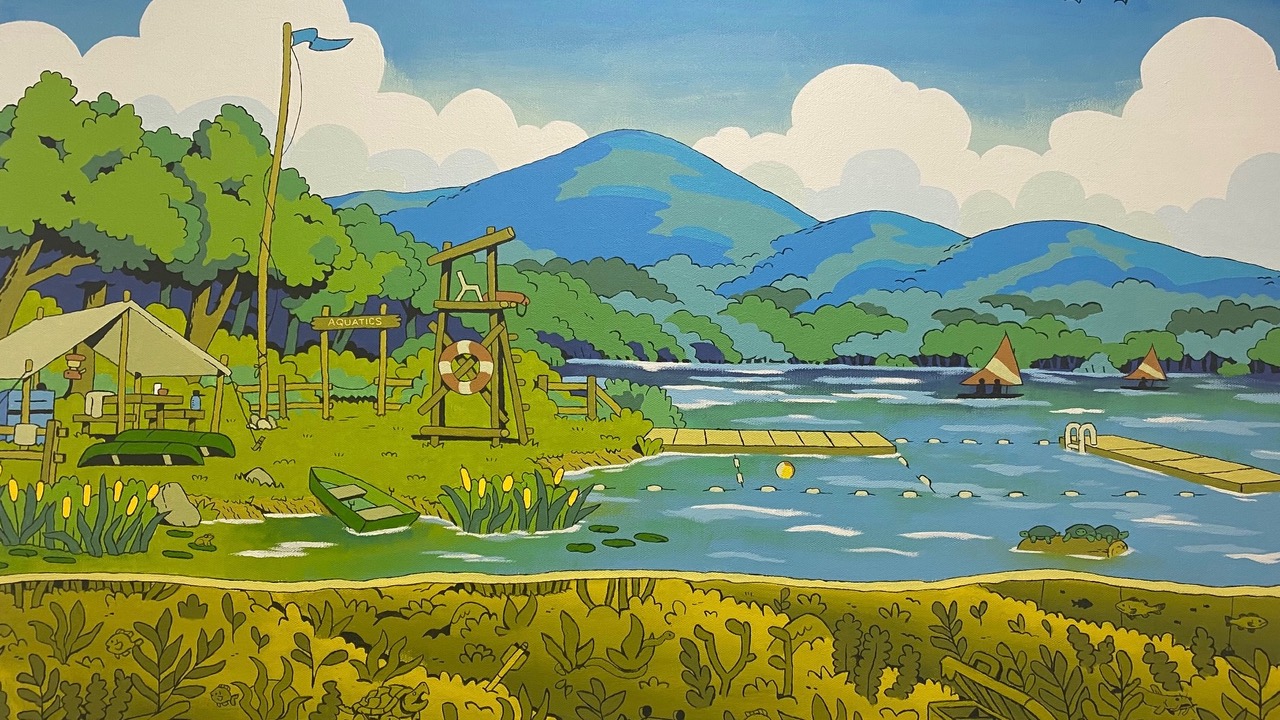 Here’s something appreciators of Jersey City arts have learned over the past few years: when Robinson Holloway has an idea, it’s worth pursuing.  Surely the Art Fair 14C director wasn’t the only one who figured that it’d be a good thing for the two substantial studio complexes Downtown to open their doors to the public at once. But the inaugural Art Crawl, which kicked off on Thursday night, felt like an event with the Holloway signature on it.  Though it included some music and introduced a new den for the JC Writers collective, it foregrounded visual art. It was large — almost 70 studios and related spaces were open — but it wasn’t so big that it couldn’t be experienced in its totality by a dedicated walker or cyclist.  It was tied to the community through incentives and enticements, such as discounts for Crawlers at Two Boots and the frozen yogurt shop on the pedestrian plaza.  And it was not afraid to be hyperlocal and exclusive.  There was no attempt to get all six wards involved.  This was a Downtown-specific event, compact and communal, just as the Studio Tour once was, long ago. 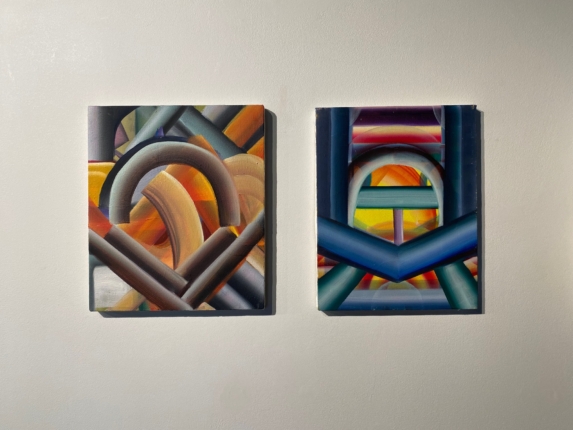 Two paintings by Katherine Mojzsis from the Art Wall

Muggy though Thursday night was, gallery-going butterflies were encouraged to flutter between the two substantial studio complexes Downtown: Art150 at 150 Bay Street and the Elevator JC building at 135 Erie. Around the two, which are just under a mile apart, there were several other places to alight. Novado Gallery (110 Morgan St.) opened its doors to the Crawl, inviting passersby to take a dip in the icy blue depths of Claudia Waters’s paintings. A few paces to the west, the ArtWall inside the Cool Vines wine shop (350 Warren St.) hosted a series of colorful oils by Katherine Mojzsis. Right at the entrance of the Canopy Hotel (159 Morgan St.) Robert Malmberg hung rectangular samples of his floral wallpaper. All three of these attractions have been up for a while, and will continue to be on view; the Art Crawl connected dots that already existed on the map.

Elevator JC, too, has become a local fixture in a very short time. The three floors of studios in the repurposed medical building aren’t all that big, but the studio spaces seem to be enthusiastically occupied, and the complex has the feel of a full and bustling house. It’s too soon to say for sure, but Elevator might turn out to be that rarest thing — an art incubator set up to encourage collaboration where collaboration actually happens. If this is the destiny of Elevator, credit must go to community director and spokesperson Shamona Stokes, a painter and sculptor whose detail includes encouraging her neighbors to resist the tug toward introversion.

So far, she appears to handling her portfolio well.  She’s also leading by example: at the Art Crawl, she showed a table of ceramics earmarked for a future collaboration. They were pretty striking on their own — curious looking vessels that resembled animals with apertures where their heads should be, and an Easter basketful of albumen-white maternal figurines just waiting to get shattered. There’s always something spooky peeking through the branches of Stokes’s whimsy, and I am anxious, in every sense of the word, to see how the other Elevator artists respond to the curious forces she channels. During a year of sidesteps and frustrations for the arts in Jersey City, she’s helped make Elevator the best and most interesting story going.

She’s had lots of assistance from the kindred spirits who’ve relocated to the building, many of whom are adept at summoning specters of their own. Alex Bingham might be the best of them. Her wide and ominous blue-grey landscapes, cloud-settings, and glowering summer skies have been on display at all of the Elevator open houses, and they’re a tone-setter for a good and rattling ghost story. In “Felled Trees,” a chain of black mountains in the background of the image, tucked under a dripping firmament that bleeds toward the edges of the frame. An artfully jagged tear runs through the foreground; it crouches like a praying mantis portrayed in negative space. The upper left corner of the image is eaten away, too. The piece is at once an oil painting and a photograph, but it’s hard to tell where one ends and the other begins. When she applies this same alchemy to a cityscape, she sure makes our peril palpable. 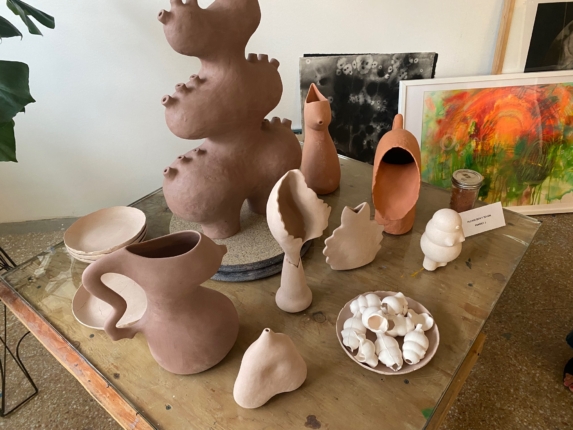 The mutable city, threatened but resilient, was a major theme of the inaugural Art Crawl. That was especially true for the Elevator creators, who returned, often, to images of Jersey City, or places quite like it, in the grip of strange forces. Norm Kirby, poet of the unbroken line, gave us a gorgeous wall of sketches in colored ink of places with which many of us will be instantly familiar: the Hamilton Park gazebo, the interior of the Snapdragon café, the alleys and rooftops of the Downtown. As is true in all Kirby images, his lines are hand-guided, human, and awfully snappable. Just a few doors over in their ”Wonderbunker,” studio-sharers BARC The Dog and John Tokar offered their own urban hallucinations: memories of glowing loading towers in Newark Bay, the subterranean city, intimations of violence and peril, but an overriding sense of the pure thrill and sense of adventure that comes from living in a place like Jersey City. BARC and Tokar work in a style that draws from cartoons and comic strips, but there’s depth to all of their scenarios, and storytelling intensity that makes their work instantly legible. BARC’s upcoming solo show “Machines I Wish Existed” at Deep Space on September 24 ought to be one of the highlights of the fall schedule; as for Tokar, he can’t be too far behind. 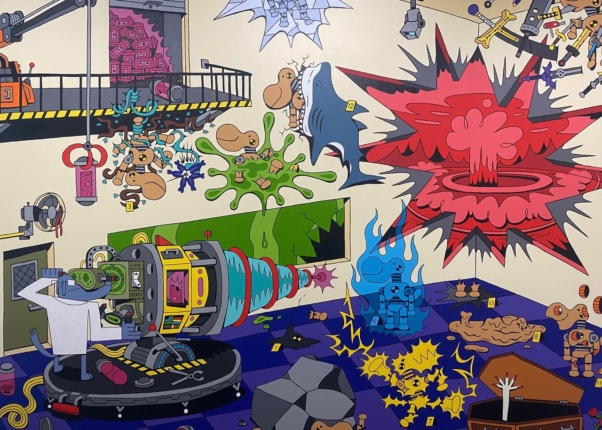 The presence of the bustling (at least on Thursday!) Jersey City Print Room on the fifth floor of the building seems to have inspired everybody to press their visions to paper and canvas squarely, communicatively, and with a minimum of ambiguity. There’s something definitive and settled about Barbara Seddon’s fields of linotype color: a firm and confident handshake with the patterns of nature and the rhythms of the street. Over at Art150, Josh Urso provided us with a tableful of his distinctively metropolitan kintsugi — concrete blocks shattered and stitched back together, each crack painted a bold color, all flaws highlighted and ennobled. It’s hard to imagine a better metaphor for the built environment in Hudson County.

Urso shares that studio at 150 Bay Street with an artist I hadn’t encountered before, and who was, for me, a discovery of the evening: Kim Bricker, whose small monoprint landscape images, many of them postcard-sized, felt like whispers of classic American outdoor scenes. Some of her balanced amalgams of color and texture suggested the play of light on the prairie, others belonged, indisputably, to the sea. All felt like they were in conversation with the remarkable ship-hull photographs of 150 Bay artist Susan Evans Grove, who seems to find entire electrified worlds on the dented and rusted sides of boats, and in a way that’s harder to define but no less definite, with the shadow-play of Josué Morales Urbina, who can make a haunted thicket out of a wallful of blue sticks and an angled light.

All this suggested to me that Art150 — the more established, somewhat more institutional building — may have already achieved some of the conversational quality that Elevator is shooting for. These artists are influencing each other and responding to each other, even if they’re not operating in the same symbiosis as BARC and John Tokar are, or as instantly sympathetic as Shamona Stokes and her neighbor Rebecca N. Johnson, who channels some of the same elemental forces. These buildings are full of wonders: so many wonders that they can’t be experienced in a single Crawl, no matter how well designed. Art Relived, for instance, a magnificent collection of lesser-known abstract expressionist paintings from the mid-20th Century, was open to the public last night. That was a museum-quality show in the corner of a Jersey City warehouse. It can’t be tucked away from view; it needs to be seen by the public.  We’ll just have to keep crawling.

Saturday Rally to Call for DeGise’s Resignation
Scroll to top