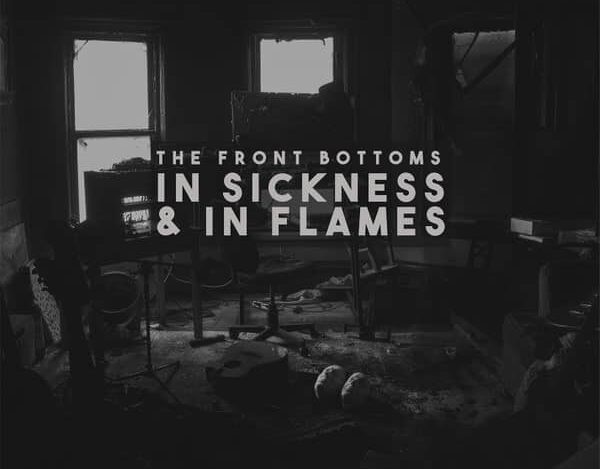 The Front Bottoms are the best rock band in New Jersey. I can make this claim because I’ve heard them all, and yes, they’re better than that one you’re thinking of. Maybe it’s closer than it used to be. Maybe not.

It says something about the current state of rock in New Jersey and elsewhere that no critical consensus has ever developed around the group the way it once did for, say, the E Street Band, or even The Feelies. But it says more about the Front Bottoms themselves, who play in a style and project an attitude that is best described as adolescent. Others may say bratty; I won’t push back. I’ll just point out that rock music was once all about adolescents, and adolescent urgency, frustration, and belligerence are still the motors of many, many great rock records. Sustaining that tone into your twenties and thirties and beyond might be an unseemly thing to do, but so is rock music itself. If you’re a rocker and you aren’t an arrested adolescent, you ought to spare us, and try your hand at dream-pop, or parenting, or PowerPoint presentations instead.

Adolescents are temperamental. In a compromised world, authenticity and consistency are important to them; that’s why emo, maligned though it is, has made it all the way to a fourth wave. The Front Bottoms’s move from Hoboken imprint Bar/None, home of oddballs, to an ordinary major label was not enthusiastically received by the band’s arrested-adolescent fanbase. They had a point: Back On Top [2015], the band’s first album for the big boys, lacked the specificity and idiosyncrasy that made the first two Front Bottoms full-lengths so compelling. The sound was there, but the voice was muted. On follow-up Going Grey [2017], the band experimented with pop arrangements and synthetic textures the way that all modern groups on major labels seem to do sooner or later. Those who tuned out because they couldn’t stomach the slickness missed an uptick in frontman Brian Sella’s tune-smithing, and maybe hisstorytelling, too. In Sickness And In Flames, the new one, zags back in the direction of loud and reckless rock, although not all the way, and tries to split the difference between the pop sound of Going Grey and the band’s earlier albums. I’m not sure the balancing act is satisfying the faithful.

But it sure is satisfying me. It might not be the most energetic record in the band’s catalog (though drummer Matt Uychich’s pep is certainly back in place), or the one with the best singalong choruses (though the refrain of “Fairbanks, Alaska” is guaranteed to move the crowd once there are crowds to move). It is, however, the fullest articulation of the character that Sella has been busily elaborating for audiences ever since the band started: a talkative, digressive, somewhat ornery guy, a regular North Jersey wiseass, sweaty from moving his friend’s furniture, a little impatient with the bullshit of others, but never so impatient with bullshit in general that he’s unwilling to supply some of his own. He’s suburban in outlook, but well acquainted with the city, he’s aware of his surroundings, but not aggressively educated, and he’s a bit too… er…, candid to be an ideal boyfriend, even though his relationships tend to govern his moods. Sella is a Garden Stater all the way, in other words, and even as the band has found success as a national touring act, they’ve never strayed too far from the Parkway.

And while it would be misleading to call the Front Bottoms a Jersey City band, the time they spent here did make a powerful impression on Sella, who refers to these streets in lyrics both specific — check out “Historic Cemetery” from Back On Top — and allusive. “Montgomery Forever”, one of the key songs on In Sickness And In Flames, uses the demolition of a Jersey City housing project as a metaphor for romantic impermanence. The track begins with an account of a very Sella-like dream of accidental sex with his girlfriend in the flat of a stranger (“no one was mad”, he assures us, in one of those casual but telling Front Bottoms asides) and concludes with a thunderous singalong. The “Bus Beat”, in which a chance encounter with a line of graffiti occasions a reflection on monogamy, feels informed by the polyglot character of life in Jersey City. It’s rock coated in Grove Street grease.

It’s also one of my favorite Front Bottoms songs ever. How you feel about “Bus Beat”, abrasive as it is, will probably indicate how you’ll feel about the rest of the set, and maybe about the band’s whole perspective. Sella is annoyed by a blithe romantic cliché — so annoyed that he’s determined to annoy you. His initial words for his girlfriend are downright mean, but he soon stumbles over their insufficiency, and begins to take the chorus maxim just seriously enough to carve out some room for himself there. The singer chides himself for wasting time on his emotions, and then plunges into the deep end anyway; and somewhere amidst sarcasm, embarrassment, and resentment, he locates his sense of devotion. “You’ll always be my girlfriend, even after we get married”, Sella howls, pledging allegiance to his wife and his wayward youth simultaneously. Hold on to sixteen as long as you can, another rock and roll crab once told us. Brian Sella probably doesn’t have much time for John Cougar, but he’s following his advice anyway.

“Bus Beat” also contains another bit of self-mockery: Sella gets in a shot at his singing voice. It remains a blunt instrument, and surely it always will be. But he’s always been very good at tonal variation, and he’s never matched inflection with meaning quite as consistently as he does on In Sickness And In Flames. His accumulative style of lyricism — phrases overheard, words purloined from posters and movies and buddies, snatches of conversation gathered from the backseat of a speeding car, all duct-taped together and delivered like a liturgy — benefits from attentiveness, and he stays impressively present to the nuances of his own words and the motivations behind the phrases. It’s a personal style that had considerable influence on the stark East Coast emo bands that made some of the most conversational rock records of the ’10s. The stretch of outstanding tracks on In Sickness that begins with “The Hard Way” and concludes with “New Song D” demonstrates that the Front Bottoms could easily be counted among those bands if they weren’t so drawn to big, slick rock gestures, millennial whoops, gang shouts, and cheap thrills.

As this is 2020 and they’re recording for a major, The Front Bottoms indulge in some obligatory affirmative pop-rock. “Everyone Blooms” isn’t Sella’s finest hour as a lyricist or Uychich’s best work as a drummer. But amidst the uncharacteristically comforting couplets, they slip in a line that worries at the listener like a stone in a shoe: “the memories of us feel so real, (they) must be fake.” He doesn’t trust his own good fortune, see, and he’s suspicious of his own romantic intentions. By the very next song, Sella is having a nervous breakdown on a long distance phone call, acting (and sounding) uncouth, worrying aloud about the implications of commitment, wondering if he’s up to the task. He is, and he isn’t; and his fumbling attempts to stay true to himself while taking on responsibility makes for great rock theater. Just as cheaters write the finest love songs, and vice versa, adulthood is best approached by the juvenile.

Brian Sella and the Front Bottoms have no interest in maturity, because that’s not something any rocker should ever have time for. But they’re growing up anyway, and doing it honestly, occasionally looking like jerks in the process, but crashing into their thirties with their snottiness, their abrasiveness, and their formidable alacrity intact. And that, my Jersey friends, ought to serve as inspiration for all of us.

Controversial Board Members Ousted at TECCS
Scroll to top