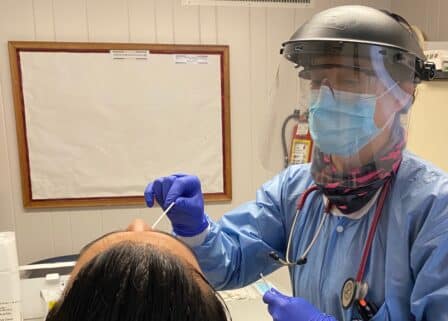 Jersey City is strategically — and effectively — protecting its homeless population from severe and fatal complications from Covid-19. For now.

Indeed, homeless individuals nationwide have fared better during the pandemic than experts feared when they began prepping for Covid-19 in March. Still, experts agree problems for the homeless remain dire even in a post-Covid world.

Perhaps no one is more surprised at the current national picture than Bobby Watts, CEO of National Health Care for the Homeless Council, a Nashville-based nonprofit advocacy group that receives funding from government and private sources.

In mid-March, Watts predicted the coronavirus would “spread like wildfire” among the country’s homeless given their particularly vulnerable status. But based on data collected as of May 29 from federally-funded health centers that serve the homeless, out of 59,345 homeless men and women tested, 1,603 had Covid-19 symptoms, a 3.2 percent rate that is much lower than had been expected.

For the most part, “in congregant settings the results are not as bad as we feared,” he said.

Still, there have been some notable exceptions to the rule. A small cluster of five people in a Boston shelter were found to be infected initially, but the number eventually climbed to 70, for example. And a Nashville mission with 500 residents reported one of five residents tested positive.

Many shelters have tried to practice social distancing by installing plexiglass to separate staff from residents and by spreading out beds, Watts said. Some larger shelters have reduced capacity by half and sent residents to alternate care sites or motels.

“Those mitigation efforts have been somewhat positive,” Watts reported, “but when we do see coronavirus cases, a lot are more asymptomatic than we feared. … It’s really variable. We don’t know how or why people are getting sick.”

Whether the coronavirus has struck down any of the homeless clients in the NHCHC survey Watts couldn’t say. That information will come from a more detailed, follow-up review that the council and the Centers for Disease Control are jointly undertaking.

Meanwhile, Jersey City has been pursuing a four-pronged response to keeping the homeless safe.

A trailer has been set up near the Journal Square PATH station that offers showers, toiletries, socks, and food to those living on the streets as well as in shelters. Secured through the city’s Office of Emergency Management, the facility is open and staffed Monday to Friday, 7 to 10 a.m.

“We’ve been seeing an average of a dozen people a day,” said Stacey Flanagan, Jersey City director of Health & Human Services. “We hope we’re building greater trust for them to seek the next level of help – getting tested [for the virus] at any of the county congregate network of shelters.”

If more people show up, there are tentative plans for expanded hours, she said.

Hudson County Board of Social Services — which was recently awarded $109,345 in federal Emergency Solutions Grant funds to aid the homeless – gets federal grants to contract with shelters out of concern that those facilities, with occupants crowded in dormitory settings and shared bathrooms, wouldn’t be appropriate for older clients presenting Covid-19 symptoms or with chronic health issues, said Frank Mazza, deputy director of the department.

“The fear was huge that this kind of environment would be an incubator for the coronavirus, especially among this population,” Mazza said.

And anyone infected would have to “shelter in place,” taking up space normally reserved for walk-ins.

So, the county contracted with the owner of five motels along Tonnelle Avenue to accept homeless persons at risk for developing acute symptoms of Covid-19 should they become infected: those aged 60 or above and/or those with underlying medical issues. To pay for their board, the county uses grant money it gets from federal emergency housing programs.

As of a week or so ago, there were 320 people staying in motel rooms with private sleeping quarters and bathrooms. About 80 percent are singles and the rest families of two or more, according to Mazza. They receive meals from the county three times a week.

A third measure unveiled by the county, is the Covid-19 “stepdown” Unit, a makeshift shelter that houses, treats and feeds primarily homeless individuals who had been hospitalized with Covid-19 and now need to remain isolated for the remainder of their care. The facility is located on Palisade Avenue in the Heights and has 94 beds (occupants are kept safely apart from each other).

The program is a partnership between agencies providing funding (the Hudson County Division of Welfare and the New Jersey Department of Family Development) and those providing healthcare CarePoint Health and Alliance Community Health). Alliance, a federally-qualified health center, is handling follow-up testing of the patients.

“We’re talking about a population, many of whom, if they had no place else to go, would likely be out on the street,” said Alliance CEO Marilyn Cintron. “We’re making sure they have a safe place to quarantine.”

“Of the 500 tested on site [since mid-April] we had about a 27% positivity rate,” she said. None have died. One person needed to be re-hospitalized, but according to Cintron, that person is now doing well.

Finally, Jersey City is working with the World Economic Forum (and an unnamed third party) to retrofit a school bus to serve as a mobile homeless shelter. Big enough to accommodate toilets, showers, a washer/dryer unit, and mini-office with Wi-Fi and microwave, the project was inspired by a program halfway around the world.

“We’re looking at what they’re doing with this concept in India as our model,” Flanagan said. The cost of reconfiguring the bus to accommodate the added functions is projected to be $17,000. According to Flanagan, it might operate on solar power.

While this array of services is certainly forestalling a local health crisis amongst the homeless currently, experts like Mazza and Watts are not sanguine about the future.

“What happens, for example,” Mazza wonders, “when the rent moratorium ends? Here at Family Services, we’ve been getting 200 new welfare applications every day.” Many, he said, are from folks who’ve been told by the government ‘You can’t go to work anymore because of the pandemic.’ It’s not a huge leap to say that this is going to be a big problem.”

Hudson County has an estimated 800 to 1,000 individuals who are chronically homeless.

Columbia University economics professor Brendan O’Flaherty told CNN he foresees a 40–45 percent hike in homelessness nationwide by year’s end to beyond 800,000 as a direct result of so many businesses shutting down and the record number of unemployment claims that it will produce.

Watts is concerned about the impact of this scenario on families in particular.

“… because of higher rents, losing a job or, if they are still working, they can’t afford a large enough apartment,” he said, referring to those who will be laid off who still have children at home.

Uncle Sam’s commitment to funding affordable housing programs needs to be strengthened, said Watts. Funding levels peaked in 1979, he said, when the U.S. Department of Housing and Urban Development budgeted $77 billion for them nationally. By 1982, the budget fell to $50 billion “and we’ve never recovered,” he said. “Right now, only one of four households who qualify for assistance is funded. This is a moral issue.”

What does “Defunding” the Police Mean?