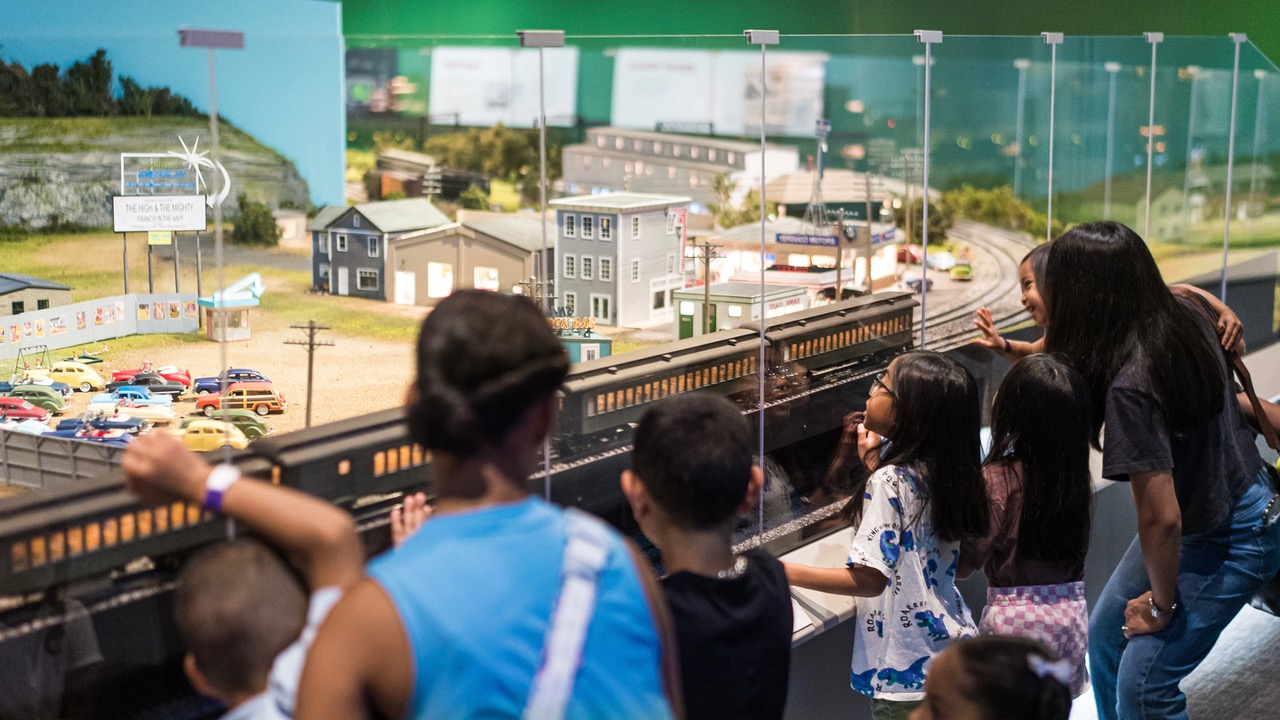 Like many children in the 1950s, John Scully was fascinated by trains, in his case the Lackawanna Railroad that ran the length of New Jersey, where he grew up, and through Cranberry Lake in Byram Township, where his family had a summer home.

Unlike many children, his fascination never wavered, even throughout his adult life. Indeed, the business executive originally from Metuchen, NJ, spent many years building one of the world’s largest and most meticulously detailed model train sets, a 3,000-square-foot re-creation of that railroad line. Beyond its more than 425 feet of train track, the set is complete with models of New Jersey railway stations, the local coal mine industry, suburban homes, realistic bodies of water, 5,000 miniature native trees and shrubs, 400 little people, a drive-in movie theater, and multiple shops and stores including a grocery store fully stocked right down to individual sausage links. 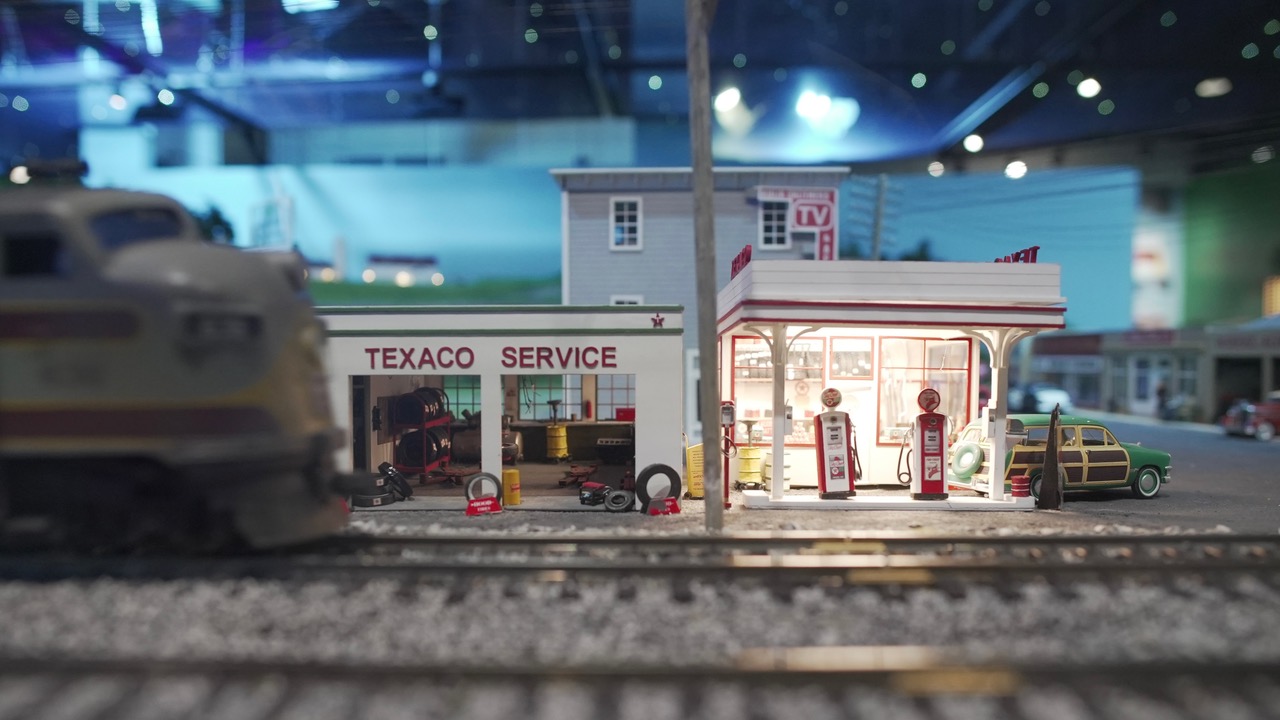 After researching a new home for his treasure, Regina and John Scully decided to donate his model railroad to Liberty Science Center to share this slice of history with its thousands of daily visitors. LSC has designed and constructed a new exhibition centered around the railroad: The Great Train Set. Opening to LSC to the public on Saturday, August 6, the The Great Train Set will transport visitors back to the 1950s, the final decade of the Lackawanna Railroad. That line began in 1851 as a way to haul anthracite coal from mines near Scranton, Pennsylvania, and later expanded into a commuter rail. LSC guests will notice the historical accuracy and scrupulous attention to the smallest details, beginning at the Lackawanna Terminal in Hoboken—one of five major rail-ferry terminals on the Jersey side of the Hudson, and the only one still in use today. The set reconstructs six of the Lackawanna’s stations.

Scully and his wife, Regina Scully, are longtime advocates of improving educational access for students in underserved communities. In 2007, they helped found the Making Waves Academy in northern California, a charter school that has graduated thousands of economically disadvantaged students and guided them through college and into new careers. The Scullys were also among the earliest trustees of Success Academy in New York. The donation of the model railroad is closely aligned with their dedication to supporting education everywhere.

“We are truly grateful to John and Regina for making Liberty Science Center the final stop for his iconic model train set,” said LSC President and CEO Paul Hoffman. “The exhibit artfully balances the old and the new, bringing modernized LED technology and interactive elements to Scully’s breathtaking tribute to the 1950s Lackawanna Railroad. Moreover, the train set is a marvel of science, technology, engineering and math – the very same disciplines at the heart of our Center’s mission.” 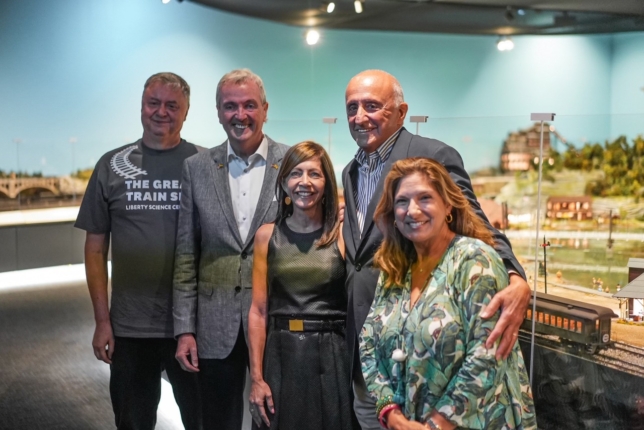 In donating his set to the Center, Scully shared his vision, “You’re never too old to play with trains. This is a tribute to my childhood, and it’s quite meaningful for us to pass this project to today’s young learners and train-lovers of New Jersey. In fact, Liberty Science Center is the perfect permanent new home for The Great Train Set. We are thrilled that the public will soon be able to experience the model that has brought us so much joy.”

Growing up, Scully was fascinated by trains, and a special train ride on his eighth birthday at Cranberry Lake was a memory he carried with him over the years as his passion for trains grew. It would lead him to build one of the world’s largest model railroads.

​​A team of architects, artists, archivists, engineers, and electricians, spent nearly 15 years hand-crafting the model, transforming the basement of the Scully’s Hamptons estate into a replica of the Lackawanna Railroad with New Jersey’s Cranberry Lake at its core. Clips from the award-winning documentary about the display—aptly titled Still Plays with Trains—will also be part of the permanent exhibition at the Center. Other elements include animations, a model tugboat, expertly-crafted miniature chandeliers, populated dining cars, and interactive elements beyond the model such as train point-of-view cameras with real-time video projected onto the walls of the museum. Additionally, the ceiling will be illuminated with a star map of the July 1952 sky in Cranberry Lake—the very sky young Scully dreamed under.

LSC members will get an exclusive preview of The Great Train Set from July 29 through August 5. The exhibition will open to the public August 6 and is included with general admission. To learn more and to reserve tickets, visit LSC.org.

Editorial: The Attorney General Must Investigate the DeGise Hit-and-Run