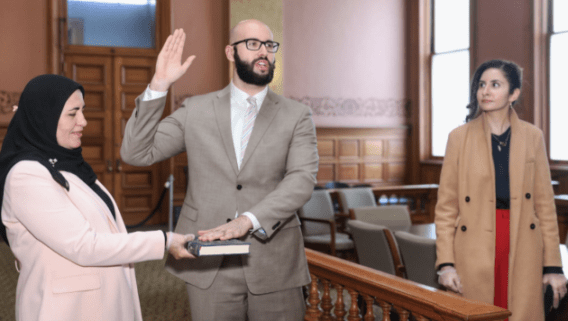 Before the vote, Councilman Solomon voiced concern about a rush to nominate Yousef Saleh since the deadline to fill Yun’s seat is still a week away on May 6. Along with Councilman Lavarro, he expressed surprise at Mayor Steven Fulop’s endorsement of Saleh, which made Saleh the frontrunner. The two men were also concerned about the seemingly unilateral, undemocratic nature of the decision. Why hurry Saleh’s nomination when earlier in the week  they had held public interviews on Facebook with all six contenders precisely to provide transparency?

As the meeting got underway, there was no discussion or consensus among the Council on who was the best choice. Instead, Council President Waterman made the motion to nominate Saleh, and Council at Large Daniel Rivera seconded the motion, thereby putting it to a vote.

“I believe we should wait until May 6,” said Councilman Solomon, who supported Jocelyn Patrick for the seat.

“My complaint with the process is the way that the mayor handled it. This is a Council position by law. Blasting a press release out with a recommendation, if you’re trying to argue that everyone had a fair shot to make their case, that didn’t convey that. A lot of people who reached out to me from the Heights feel the decision was made behind closed doors.”

Councilman Solomon then went on to endorse Saleh despite the fact he didn’t vote for him.

“I know Yousef, and I think the world of him,” Councilman Solomon said. “I’m excited to work with him. He has an extraordinarily progressive agenda.” 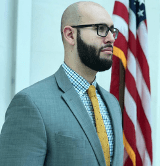 When it came time for his vote, Councilman Lavarro said he, too, felt the vote was rushed and did not reflect the feelings of the people in the Heights, especially those who submitted a petition to the Council hours before the meeting. Each Council member received the petition with more than 200 signatures demanding they use a thorough and transparent vetting process.

The Public Calls In

In the public comments section of the meeting, Catherine Hecht, one of the petition’s signers, called in to address the Council. She applauded Councilmen Lavarro and Solomon for holding pubic interviews with the candidates on Facebook.

“That’s the type of transparency we need at this time,” she said. “I really urge you to think about all the people who have contacted you and choose what the people want.”

Several candidates called in with one last appeal for the seat. Candidate Jocelyn Patrick was the only one who said she did not want to run in the general election in the fall; her aim was to fill Councilman Yun’s seat as a temporary measure.

“The reason that I am nominating myself for this position is to allow the voters in November to make the decision,” she said. “I do not plan on running in November.”

Jersey City resident Jeanne Daley called in voicing her concern that the rush to vote on Saleh’s  appointment showed disrespect to Councilman Yun.

“I’m disappointed in this rush,” Daley said. “It’s an insult to Councilman Yun’s memory. Why this nomination from our mayor and Miss Waterman? That’s a way to airlift a convenient chess piece to allow them to control more of the board and what goes on in Jersey City. If you take the Fulop nominee, they will do what the mayor wants, what the administration wants.”

Council President Watterman, who cast the final vote in favor of Saleh told the Council her reason for nominating Saleh: “I am not a procrastinator.”

“This is the probation period,” Watterman said. “If Yousef does not meet the needs of the Heights, then in November, the residents can vote against him. He won’t stay in that seat. They say they got 200 signatures. There are over 40,000–50,000 people in the Heights. In November, the people can come out and vote.”

Addressing dissension among the ranks on how the vote was handled, Watterman added, “I hope as we go forward, we learn to work together. We pick up the phone. That’s working together as a team. I hope going forward we can do that.”

Advocate for the Heights

After the Council announced the appointment and adjourned the meeting, the Jersey City Times reached out to Yousef Saleh, who had watched the proceeding on his computer. As Jersey City’s new Ward D Councilman, Saleh says he hopes to advocate for Heights residents especially now as people struggle to make ends meet during the Covid-19 pandemic.

“Rent is due today, mortgages are due today, people are struggling, suffering, sick and dying,” he said. “We are going to help them get back on their feet. I will make sure the people of the Heights are taken care of. I’m going to be a tireless advocate for them.”

The next virtual City Council meeting will be held Wed., May 6 at 6 p.m.

To view the meetings, go to the Council’s page on the city’s website.

Header:  Yousef Saleh being sworn in. Photo by Jennifer Brown/City of Jersey City