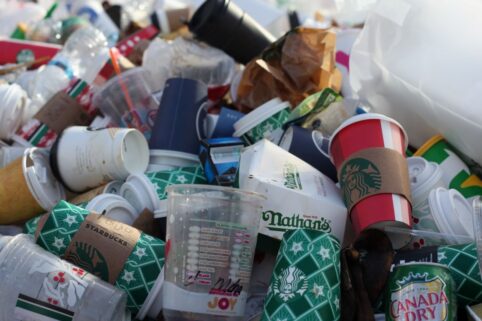 As beach towns begin filling up for the summer, increased take-out dining is causing single-use waste to build up

Since Memorial Day, the Jersey Shore has been grinding back to life. But after Gov. Phil Murphy lifted his stay-at-home order on June 9, the influx of visitors has, in some towns, been even greater than normal for this time of year.

Lines of sun-dazed tourists snake outside the doors of pizza parlors and seafood dives. Supermarket staff are locked in a perpetual battle of shelf restocking. Souvenir and clothing shop workers are hustling to fill a deluge of curbside pick-up orders. The common denominator among nearly all of them? Single-use plastic bags and containers that quickly end up overflowing trash bins and dumpsters.

“The city had anticipated an increased volume of trash due to the takeout-only restriction and to the greater number of people in town for early June,” Gillian wrote. “But not to the degree we saw over the last two weekends.”

Gillian assured residents that the city “has already increased the number of officers performing highly visible patrols and is adding undercover officers to patrol our beaches and boardwalk to search for violators.”

The city administrator for North Wildwood, Ron Simone, also confirmed “an uptick in trash and recycling with all of the restaurants and bars only being open for takeout until this past Monday, when the Governor granted outdoor dining at 50 percent capacity.” Simone said the city has had to increase the placement of waste receptacles, as well as pick-up times, in “high density” areas like the beach, boardwalk, and entertainment district. 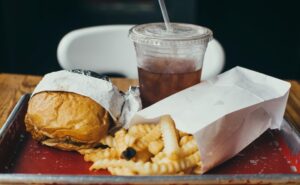 Photo by Christopher Williams on Unsplash

Waste is piling up

“We couldn’t keep enough garbage cans out,” Chris Carson, the public works director of Beach Haven, said. “Our crews would show up in the morning and the cans would be overflowing, with the birds picking at them.” Though Beach Haven’s ban on plastic bags, which was instituted in 2018, has helped, Carson pointed out that the bulk of the additional trash is single-use takeout containers.

In early March, New Jersey was on its way to passing one of the toughest single-use plastic bans in the U.S. But as the pandemic sent public health officials into high alert and New Jersey residents into lockdown, the bill has since been stalled in the Assembly Environmental and Solid Waste Committee. Another bill, introduced earlier this month by Sen. Bob Smith (D-Middlesex) would require certain plastic, glass and paper containers and bags to be made in part from recycled material, and it would prohibit the sale of some polystyrene packaging.

Early studies of COVID-19 transmission suggested that the virus could live on surfaces for several days. The plastics industry seized on the news, using it as an opportunity to urge states and municipalities to “Bag the Ban,” as the American Recyclable Plastic Bag Alliance put it, and re-embrace single-use plastic bags. The New Jersey Food Council, a lobbying group that represents food retailers and their supplier partners — which previously had supported a statewide ban on single-use plastic and paper bags — sent a letter to every town with single-use packaging restrictions, urging them to reverse course during the pandemic.

Citing Murphy’s Executive Orders 103 and 104, the council’s president, Linda Doherty, wrote, “…all towns should recognize that the Executive Orders supersede these potentially detrimental local ordinances and prevent their enforcement.” In fact, there is no language in the executive orders that suggests local ordinances on plastic bags and other container should stop being enforced.

Most of the Shore towns, like Beach Haven, refused to lift their bans. But others did, like Brigantine, just north of Atlantic City, which suspended enforcement of the city’s ban on single-use plastic bags. As far as reinstituting enforcement of the ban, Ryan Hurst, Brigantine’s assistant to the mayor and city manager, said, “At this time I don’t think there’s any talk of going back.” That decision, Hurst pointed out, would have to go before the city council.

While there has been some confusion in press reports, guidelines from the Centers for Disease Control and Prevention on COVID-19 transmission have always stressed that the virus spreads predominately through person-to-person contact, rather than via contaminated surfaces. Independent research organizations, like the Center for Infectious Disease Research and Policy, have also found that, while the virus can remain detectable on surfaces for periods that can last several days, “it is unknown whether the virus would be infectious for the entirety of these reported durations.” The New Jersey Department of Health does not explicitly require the use of single-use plastic bags or warn against reusable bags, and there is no evidence to show that the virus lasts longer on reusable bags than on single-use bags.

“The plastics industry is trying to make hay out of this whole thing, trying to say everything should be disposable,” said John Weber, the Mid Atlantic Regional Manager of the ocean advocacy group, Surfrider Foundation. “The number one bit of advice from this pandemic has been wash your hands, because soap and water will get rid of this virus on any surface. If there is single-use garbage out there, it’s not all necessary — people should feel safe with reusables.”

Hoping that outdoor dining will help

“Now that outdoor dining has gone into effect, we are hoping to see a decrease in the single-use refuse that had been filling our trash receptacles more quickly than usual,” said Long Branch’s business administrator, George Jackson, who noted that the greatest uptick in waste had been on the beachfront.

Amy Goldsmith, the New Jersey state director for the nonprofit Clean Water Action, has been working with towns to ensure they maintain their single-use bans, but also to find ways for businesses to safely distribute takeout food and other goods without exacerbating the waste problem. “If somebody’s getting a sandwich, then wrap it in one wrapper, whether it’s paper or wax paper or tinfoil, but don’t then put it in a Styrofoam container,” Goldsmith said. “Or, train your staff to ask customers if they need utensils or condiments, or if they’re actually just picking up and going home where they can put their food on a real plate with real utensils and condiments from the refrigerator.”

For consumers, Weber, who is also the council president of Bradley Beach, pointed to Surfrider’s Ocean Friendly Restaurants program, which features restaurants that don’t use Styrofoam or plastic bags or straws, and follow proper recycling and energy efficiency guidelines. “First and foremost, seek them out,” Weber said. “But also, refuse — say, ‘No thanks, I don’t need a bag.’”

In Ocean City, Patty Talese, who along with her husband owns Jon & Patty’s, a certified Ocean Friendly Restaurant, the ability to have outdoor seating has been a relief beyond the fact that it has allowed them to slowly return to some normalcy. “When we were pick-up only, people still sat outside on the public benches, and the trash cans were full,” Talese said. She and her staff were having to take out the trash three to four times a day, Talese added, but with the return of outdoor dining, “I only take it out once a day now.”

Nevertheless, the busiest days at the Shore are yet to come, and with them will come the added responsibility of visitors, residents, business owners, and city officials to adapt safely but also innovatively. “We’ve moved so many businesses in the right direction,” Goldsmith said. “But some things may not change, and that’s a grave concern for us.”