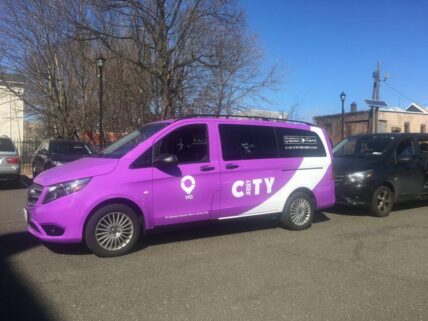 With the call put out for drivers and the princely color of purple decided upon for its vehicles, Via transportation company’s launch of 14 of its vans in Jersey City is slated for Feb. 25, according to a message on the company’s app. The vans are being introduced to provide better transportation between Greenville and the Heights. The six-passenger shuttles, a few of which will be fully electric, will also whisk commuters between these same neighborhoods and the transit hubs in Journal Square and Downtown.

“This innovative tech-based system is going to help create mobility for our residents who live in parts of our city that sometimes lack connectivity,” said Mayor Fulop in a press release.

For many years, Greenville and the Heights have been considered transit “deserts,” places where public bus and train service is sorely inadequate. When in June 2019, Hudson County closed the light rail stations on West Side Avenue, Martin Luther King, Jr., Drive, and Garfield Avenue in order repair sewer lines beneath the tracks, it made these communities only more isolated and inaccessible. Referring to the affected residents, indeed all residents of the underserved neighborhoods, Fulop noted the shuttles would “ease their commutes and diminish their frustration.”

Rides on the vans will cost $2 one way and will deposit customers within three blocks of their requested destinations; wheelchair-accessible versions will be available. To arrange for pickups, riders can use an app or place a phone call. Initially only credit cards will be accepted, though the company does offer a cash option in cities it’s been operating in for some time; service hours will be Monday through Friday from 6 a.m. to 10 p.m.

How does Via differ from the private jitneys operating in Hudson County? Like the jitneys, the vans will transport numerous people at once; unlike them, they will be available on demand, and the stops will not be pre-fixed; each van’s course will be determined by proprietary software based on passengers’ needs at the time of scheduling. In this regard they are like Ubers and Lyfts.

Via touts its product as the best of the old and the new. Their technology allows the firms’ engineers to “collect data and build virtual routes that could become formal stops and routes,” a spokesperson said. Passengers will “find it easy to meet their vehicle following booking. They will be directed to a nearby corner within walking distance for pickup.” Wait times should “not exceed 15 minutes,” the spokesperson added.

Via already operates in New York City and Washington D.C. among 45 cities total in North America (and among four other continents). Readers can learn more at RideWithVia.com