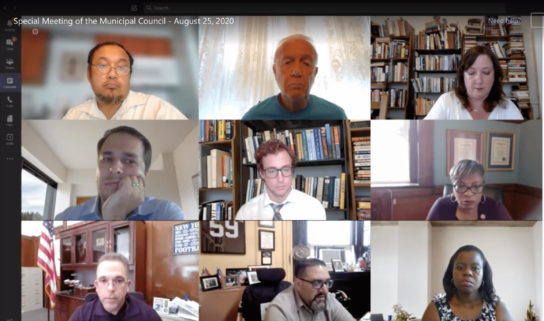 In a contentious virtual city council meeting on Tuesday that lasted close to nine hours, Jersey City residents sounded off on the administration’s $658 million 2020 municipal budget. And sound off they did, with a majority of speakers criticizing both the scheduling of the meeting and the the fact that the budget would make minimal cuts from the Department of Public Safety while making vastly larger cuts to the Departments of Health and Human Services and Youth Development and Recreation.

Earlier in the month, Mayor Fulop had lauded his proposed budget for “plugging a gaping budget hole” caused by $50 million in revenue losses coupled with $20 million in added expenses related to Covid-19.  In the same press release, the mayor highlighted “approximately $25 million in immediate and long-term savings from voluntary employee buyouts, hiring freezes, restructuring personnel, elimination of overtime costs, reassessment of operational efficiencies, healthcare cost reevaluation, program inventory assessments, reducing and eliminating operating costs and contracts, internal audits, and debt restructuring.” With these cuts, the mayor said, residents would be spared a “tax increase.” Left unsaid, however, was an impending hike in school taxes brought about by cuts in state aid and a drop in revenue from a city payroll tax.

At Tuesday’s meeting, property taxes and the niceties of budget balancing were far from uppermost in speakers’ minds. The perception that the mayor and his council supporters were attempting to ram through a bloated appropriation for the police department at the expense of social justice for Black and brown people in Jersey City raised the ire of many.

Jenny King’s remarks were typical. “The timing of this meeting at 2 p.m., which was called four days ago, is unfair and inconvenient to Jersey City residents who are unable to make the time to speak in the middle of a weekday.” Jena Lichtenstein went further, telling the council, “You should be ashamed of yourselves. I’m deeply disappointed that this vote is taking place at 2 p.m. on a workday at a meeting called as hastily as the council rules of order allow.”

But if the timing of the budget hearing caused consternation amongst administration critics, a proposal by councilmen Rolando Lavarro, Jr. and James Solomon to redirect $5 million in savings away from the Jersey City Public Safety Department and into housing assistance, youth jobs, and community-staffed anti-violence initiatives was enthusiastically supported by those same speakers.

Pamela Johnson, Executive Directory of the Jersey City Anti-Violence Coalition was one.  “The $5 million are pennies in the grand scheme of things … the South Side is already over-policed, and that hasn’t prevented one single act of violence … homicides have taken place while police are sitting in their cars on the corner.” She went on: “Is policing the only answer?  Because if it is, we are truly in trouble. We are in no better position because of more police. Police have not been defunded yet, and yet [violent incidents and drug dealing] are happening and continue to happen.”  But, she added, “defunding doesn’t mean abolishing.” Activist Frank “Educational” Gilmore called the 42% cut to the recreation budget “almost criminal.”

Brian Long argued that “when you cut from youth services and recreation and … bring the total [number of police] to 950, a number which is double the median of cities our size … the answer becomes clear … this budget does not help the people of this city especially its most vulnerable communities … members of this council love to say that we can fund the police and the communities, and yet time after time you defund the communities, you defund education, you defund youth services, but you always seem to fund the police.”

Police union president Carmine Disbrow was having none of it. Claiming that the police had been “outgunned” by terrorists during the kosher market siege in December, he warned  that the budget cuts proposed by Lavarro and Solomon would make it less likely that police protection would be there in the future. He credited the police with keeping protests over the killing of George Floyd peaceful, claiming that it was evidence of the “important bonds” the police have built with “the communities they serve.”

Retired detective Mark Rizzoli held nothing back.  “Councilman Solomon, you’re clearly a socialist.”  Lavarro and Solomon, he said, were “giving in to the mob and the criminal element.”

Speaking as a rookie Jersey City policewoman, Christina Freeman tried to strike a balance. “Am I for defunding the police department?  The answer is no. And it’s not because I’m a police officer. It’s because I grew up in Ward F. We’re already defunded. Our stuff at the academy—we pay for. The equipment we wear—we pay for.  The only thing the city provides for us is the radio, the badge, and the bullet proof vest, which isn’t adequately fit for females. Am I for social services here in Jersey City? Absolutely. We need drug rehab. Do we need recreation for the children? Yes.” Citing the effect of potential cuts on new police officers she added, “I survive on $1,200 every two weeks. I can make more working at McDonald’s. I took an oath. I love my city. As far as people saying that the police don’t live here in the city? It’s a lot of us that do.”

John Boamah, a police officer living in Ward F and a member of Blacks in Law Enforcement Servicing the Community, argued that cuts to the budget would harm minority cops. “We’ve had so many officers come on the job from the community who are making a difference. I understand that we’re not popular, I get it.” But, he continued, “There is so much wasteful spending, these bike lanes. For so long the city has had problems finding funding for kids programs. Give us a Boys and Girls Club in Ward F.”

When the speakers had finished, Councilman Solomon made the argument in favor of his amendment. “At the end of the day this budget only offers one solution to the issue [of violence and disinvestment], and it doesn’t offer anything else.” He cited jobs and mentoring programs from Chicago and Philadelphia that that have caused drops in violence by 30% to 50%. “There is incredible evidence that [these programs] will reduce violence. Investment leads to that safer community we all want.” He cited Newark, which has allocated 5% to anti-violence community groups, as an example to emulate. He then warned that it would be no easier in the future to fund these programs with declining payroll taxes, state budget cuts, tax appeals, and declining PILOT income.

For his part, Councilman Lavarro pushed back against “gaslighting and fear mongering” by the amendment’s critics. He cited a petition signed by 800 people in support. He asserted that the amendment wouldn’t lead to cuts of personnel or the raiding of pensions as some critics had charged. “Why are these investments so important?” he went on. “Police don’t prevent crime.  They react to crime. I’ll be the first to say that it’s a damn shame that we don’t provide funding for uniforms and guns [for the police]. We also need to give people what they need. We need to invest in the community. I will not give up the fight.”

Like his colleagues, Councilman Daniel Rivera commended the amendment’s intent but voted against it. Citing increases in crime in New York City and Chicago, he explained his vote. “I wasn’t a fan of defunding the police department. I’m very passionate about it.” He added, however, that “I wish we could have more solid discussions. Let’s start in November to really engage with these conversations we want to have.”

Councilwoman Denise Ridley pointed to the need for better relations between the police and the community. “A vote on this budget does not mean we don’t believe that Black lives matter. I’m Black. I would be crazy not to believe that my life matters. I believe that the residents of Ward A support the budget overall and definitely have been calling for more and more and more police in the area.”

Council president Joyce Waterman noted that because of the killing of George Floyd, “people are paying attention and want cuts.” She agreed that there is a need “to expand mental health, recreation and anti-violence … I work with people who are less fortunate. I live with racism, so what makes you think I don’t want to combat it?” But, she added, “I know one thing, you don’t want to demonize all police officers.”

Councilman Jermaine Robinson agreed on the need for more services.  “We need to take care of the kids.” Then, offering a mild critique of some callers, he added, “I’ve heard a lot about the Black and brown communities. I want to know if you’ve gone out and talked to the Black and brown communities. I’m there every single day. They’re all trying to find police officers. We have to sit down, and we have to make this plan.”

Councilwoman Mira Prinz-Arey called the Solomon-Lavarro amendment “well intentioned” and urged the council to begin work on the issues it raised sooner for next year’s budget.

Councilman Yousef Saleh explained that “as well intentioned as it is, it doesn’t really address the pervasive issues in the Heights. The vast majority of residents in the Heights want the police. I personally would like to see more police in the Heights. A lot of calls go unanswered.”

Councilman Boggiano complained that many inaccurate statements were made about policing and offered to meet with police department critics.

In the end, the Solomon-Lavarro amendment was voted down 7-2.  The budget passed 6-2-1, with Councilman Saleh abstaining.