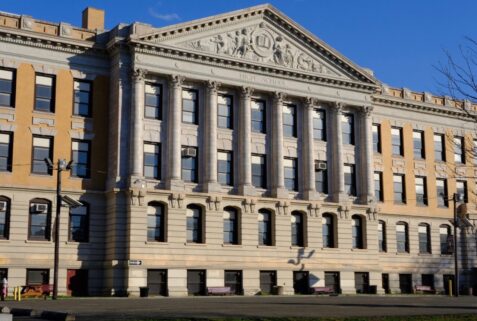 Parents Had Been Given Survey But Remain Confused About Instruction Options

After a moment of silence for U.S. Senator and civil rights icon John Lewis, who passed away on July 17, the Jersey City School Board met Thursday to discuss a back-to-school survey sent to parents about various options for re-opening schools in September and the modes of instruction that will be available.

“Based on the survey information, we need to know what the parents’ requests are as far as sending their children to school,” School Superintendent Franklin Walker said. “We also need to know and identify the staff that are coming back under the circumstances. Once we identify what the parents’ wishes are with their children and identify the staff that’s available, we can make a decision that supports that process in terms of instruction for students.”

Superintendent Walker discussed options for in-person instruction, hybrid instruction (which  would feature both in-person and remote learning),  and 100 percent remote learning for children whose parents do not want them in the classroom during the Covid-19 pandemic. Parents were told there will be a three-to-five week lead time for them to make their decisions prior to September’s re-opening. Several parents called in during the public comments part of the meeting to express their confusion with the survey. Others posted their concerns online regarding the timeline.

Superintendent Walker said he is concerned about the operational challenge of in-person instruction for Jersey City’s 30,000 school children. He said that many staff members, approximately one-in-five, will not be returning in the fall, and that to keep children spaced sufficiently apart per public health guidelines, only 30 percent of students would be able to attend school in person at any one point in time.

“The reason we’re taking the time we’re taking (is because) we have 30,000 students and 40-something buildings we have to deal with,” Superintendent Walker said. “We don’t want to be premature in our decisions and then have to continue to make major changes as we start the process under those circumstances. We also want to take time to listen to parents to make sure their concerns are included in the process.”

School 5 PTA President Kristin Hopkins called in to say there was confusion among parents regarding questions on the survey.

“Are these questions based on the start of the school year or the whole year?” Hopkins asked. “What instruction is guaranteed? Live instruction? Online? Many of us know it is not logically possible to send children to school when it’s not safe to sit in a restaurant for an hour. Please share what you know at this point. With hybrid learning and others opting for remote learning, how are teachers supposed to teach? What will be the safety procedures for the hybrid models?”

“As far as remote learning, everyone needs to understand that we were, in March, presented with a scenario where we had to provide instruction for students with schools being closed at a moment’s notice,” Superintendent Walker said. “We did a very basic format for remote learning, but going into September we’ve had a majority of our teachers involved with professional development. We’ve identified the Google classroom as our platform and support. It will be detailed. It will be structured. It will be delivered so that the circumstances parallel to students being in school will be simulated as much as possible considering the circumstances.”

Parent Fay Rigsby said she had questions regarding the survey and hybrid learning. Rigsby and other parents, who have a group on Facebook, were also confused by the language in the survey. She said the parents don’t have enough information to give their opinions.

“We feel there hasn’t been enough information provided to parents regarding how it’s going to be handled,” Rigsby said. “My personal question is about 100 percent remote learning. Does this mean your child is not registered in school? Are there  repercussions to 100-percent remote learning? Does it impact the student? We don’t have the information to make the right decision at this point.”

Superintendent Walker reassured parents that it’s okay if they don’t fill everything out in the survey. He said, “The survey is very important, so whatever you can fill out, fill out.”

School Board Trustee Gerald Lyons said he did not receive a copy of the survey until the meeting that night. When asked, none of the board members said they had seen the survey or had had any input in writing it.

“I think it’s very flawed,” Trustee Lyons said. “They need to redo the survey and make these questions clear.”

Board Vice President Gina Verdibello asked when the school board would return to in-person meetings. She said it wouldn’t be right to expect children to go back to the classroom while the board continues to hold virtual meetings.

“If we’re going to have this idea of opening schools again, it’s better we show our support by going in as well—in the safest form,” Verdibello said. “We will not be leaders if we are hiding at home.”

Board President Lorenzo Richardson said that as a board member and father of a child in the district, he would not ask any child, teacher, or staff member to walk into the buildings if he’s not willing to walk into them, too.

“If we’re not having meetings at the central office or designated places, I will not ask anyone to step into a building,” President Richardson said. “I wouldn’t ask anyone to do anything I would not do myself.”

During the meeting, parent Lisa Carey said in her online post: “School should just be online where the teachers are still able to teach the students.”

Parent Corey Davis posted online that she wants children to be vaccinated against Covid-19 before sending them back to school for in-person instruction.

“The kids need vaccine shots before the start of school,” Davis said. “We have nothing to fight this.”

“How about testing for everyone before we go back,” Harris said. “I love my city, but I think our kids are getting short changed.”

Prior to the start of school in September, the school board will hold additional discussions and committee meetings. Superintendent Walker said in the coming weeks parents will be contacted again for their input. In the meantime, he asked them to be patient while the board works out the details for re-opening the schools.

“I know it’s a tough situation,” Superintendent Walker said. “I would ask the parents for their patience. The toughest part of this process is the waiting. Just like you’re waiting, we’re also waiting for guidance from the CDC (Centers for Disease Control), the health department, the Department of Education, and the governor’s office based upon whatever executive orders that they decide they want to submit to us. Ultimately, it’s going to be the district’s responsibility based upon the structure in place because we have to customize it based upon Jersey City‘s needs.”

The next virtual school board meeting will be held Friday, July 31 at 6 p.m.

For other Jersey City Times coverage of issues involved in schools’ reopening in the state, click here.