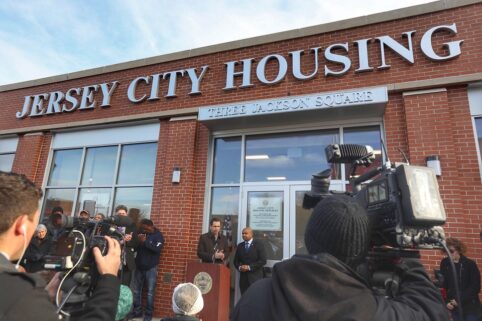 Nearly two years ago the Fulop Administration proposed phase two of its creation of a city hall annex on Martin Luther King Drive in Bergen-Lafayette, a phase that would add two buildings to the annex’s site and move additional housing-related agencies to the neighborhood. With both of those projects now completed, the mayor’s office recently heralded plans to locate the newly created Division of Affordable Housing to the complex. Add to that the retail space for entrepreneurs that has literally popped up in shipping containers across the street, and Jackson Square, as the area adjacent to the MLK Drive Station of the Light Rail is now known, is percolating.

In detail, here is what’s new. 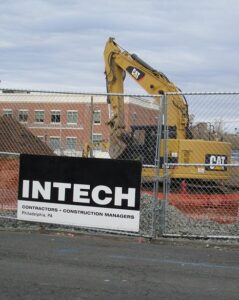 In November, the city held a ceremonial ribbon-cutting for the latest addition to the Jackson Square campus: a new four-story building that will front MLK Drive and Kearney Avenue and will accommodate the newly created Division of Affordable Housing, other municipal offices not yet specified, a public meeting space, and a parking deck that will be opened to residents during non-business hours.

This new building, already under construction, is expected to open within 18 months or so.

Next to that structure will be developed the fourth and final component of the Jackson Square campus – a new 11-story building that will house the city’s Public Safety headquarters and other municipal offices.

These facilities will complement the previously opened three-story City Hall Annex at 1 Jackson Square (360 MLK Drive) where the Divisions of Building, Zoning, Planning and Community Development, office of the director of Housing and Economic Development (HEDC) and Department of Health operate.

The new Division of Affordable Housing is designed to serve as a clearinghouse for monitoring rents, keeping an affordable housing stock inventory, maintaining waiting lists of residents who have requested affordable housing units, and developing a resource guide.

Not surprisingly, the added jobs, foot traffic, and overall vibrancy from the redevelopment of Jackson Square is spilling over into other sectors of Bergen-Lafayette’s economy and streetscape. 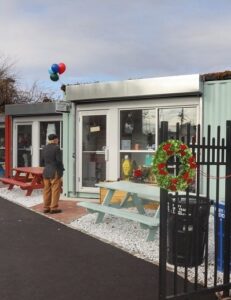 Just across the street from 342 MLK, the city, in partnership with the Jackson Hill Special Improvement District led by Melissa Massey, has converted an empty lot into “Container Village.” Four empty shipping containers have been transformed into temporary homes for pop-up shops in which retail entrepreneurs can showcase their businesses at no cost for anywhere from two weeks to two months.

Recent occupants have included a sauna studio run by Alyza Brevard-Rodriguez, an NJCU alumna and a U.S. Naval Reservist; an Afro-centric clothing, accessories and oils shop created by Tafari Tribe, a transplanted Brooklynite now looking to expand to the Garden State; a “globally-inspired home accents skin care and accessories” store headed by entrepreneur Tara Ocansey; and an apparel and pregnancy-related services boutique for women in their fourth trimester that also provides advice for women “on the continued journey of motherhood,” according to retailer Nia Reid-Allen, an ex-Brooklynite who has taught at the Jersey City Bethune Center for the past two years.

Massey, who credited the city’s Economic Development Corp. with “filling in a couple of budget gaps” to help supply the containers with lighting, power, heating and ventilating, said she’s “excited about the potential for growth” of local small businesses with the boost from the pop-up venture.

“I’ve got people sending me applications from Brooklyn,” she said, “but these spaces are reserved for Jersey City businesses.”

Massey, aided by the city’s Office of Diversity Inclusion and  Economic Development Corporation and by the Hudson County Office of Minority and Women-Owned Enterprises, helps advise the budding retailers on making their businesses permanent.