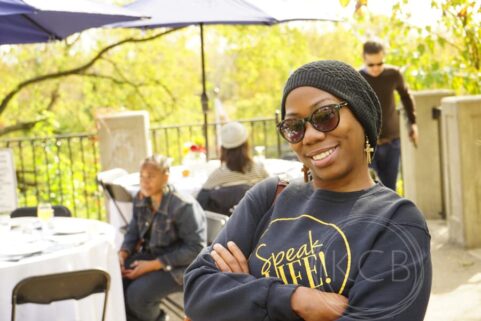 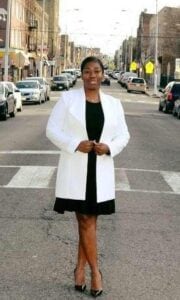 When Jersey City resident Pamela Johnson was in her 20’s, a spray of gunfire lodged three bullets in her stomach and torso. Undeterred, Johnson healed, put herself through college, earning bachelor and master’s degrees, and turned a page.

In 2014 when Police Officer Melvyn Santiago was killed in front of Walgreen’s on Kennedy Boulevard in Jersey City, Johnson and other community activists banded together to address the wounds that were also inflicted on their community. That’s how the Anti-Violence Coalition of Jersey City began.

“Our mission is to address the needs of public safety in the community, and focus on preventing violence to make sure families are safe to walk the streets,” Johnson says. “We do this in various ways. We have all different types of programs and actions that we run. We had our first meeting at my mom’s dining room table.”

For Women’s History Month, the Jersey City Times spotlights Pamela Johnson for her work as a community leader, and anti-violence activist who helps people in their darkest hours.

With offices on Oxford Avenue, and recently renamed the Anti-Violence Coalition of Hudson County, the non-profit group reaches out to about 65 people a month through self-improvement workshops, empowerment seminars, and family and victim support. Johnson, along with co-founders Cynthia Mallory-Chisolm, Joe Brown, and Bruce Alston teach conflict resolution workshops in the Jersey City public schools, juvenile detention centers, and places like Haven Respite, a center for children and families where Johnson serves as director of community engagement.

“One of (the coalition’s) programs I really love is ‘Occupy the Corners’,” Johnson says. “We started doing this in 2014. We occupy the hot spots. Where you see police on the corners, those are the hot spots. They’ve been hot spots forever.”

Johnson recalls handing out “Know Your Rights” pamphlets from the NAACP at a popular hot spot at a time when neighborhood tensions were running high in response to shootings of unarmed black men, she says. Johnson struck up a conversation with a teenager who said he was interested in becoming a lawyer someday. With Johnson and the coalition’s guidance, the teen went on to graduate high school, earn an associate degree from Hudson County Community College and a bachelor’s degree from Saint Peter’s University.

“When we occupy the corners, we introduce ourselves,” Johnson says. “I ask is there anything I can do to help. We bring literature. We partner with other organizations who offer services and resources so they come out on the corner with us. When there’s violence in the community they call me. We show up at the scene of homicides and shootings. We offer intervention and mediation services.” 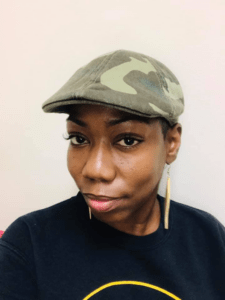 Johnson sees the work of the anti-violence coalition as a bridge of support for victims and alleged perpetrators traumatized by violence. When an alleged shooter is caught and the family is going back and forth to court, Johnson says her team supports them through the process. When a  victim survives, the team visits them in the hospital and helps them develop a safety plan so they don’t get shot again.

“We’re with them through the whole thing,” Johnson says.

Johnson understands gun-violence first-hand. When she was 25, and with a daughter in Kindergarten, Johnson and her two girlfriends were caught in the crossfire of two gunmen.

“The anti-violence coalition has worked closely with the Jersey City Police Department and we consider them strong partners,” Deputy Chief Flora says. “I’m proud to be a part of the great work they do. It’s hard work and not always a happy ending, but to have an organization that continues to make a differences despite the upward battle is a game changer.”

Recently, Johnson was introduced to a 16-year-old by a close friend who said the boy was having behavioral issues and about to end up in the juvenile justice system. She met up with the teenager at Oh La La Empanada, a food stand on Communipaw Avenue to see how she could help

“Whenever we meet with the youth, we know you gotta feed them,” Johnson says. “So, we met there and sat talking, trying to figure out what to do for him and then basically we surrounded him with resources. We put a circle around him so he had outlets to go to, people to talk with. We connected him, and walked with him through the entire time.”

Over time, the teen’s relationship with his mom got better, Johnson says. He went back to high school, graduated and found work that allowed him to move out of his mom’s place and into an apartment. He just needed direction, she says.

A year ago, Governor Phil Murphy contacted Johnson and the coalition to find out about their anti-violence programs. He had already designated money to Camden, Paterson, Trenton, Newark and Atlantic City to address trauma and violence in their communities, Johnson says. Governor Murphy added Jersey City to the list, and the coalition, in partnership with the Jersey City Medical Center just received $2 million for an anti-violence program based on a grant Johnson wrote. 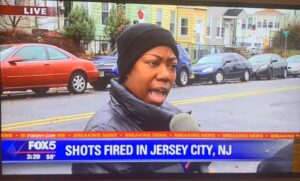