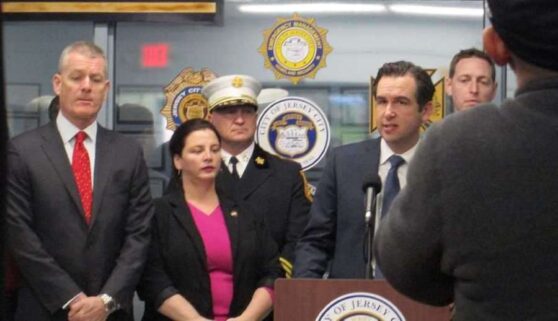 Rumors and speculation notwithstanding, the specter of the coronavirus (Covid-19) has – so far – touched Jersey City only minimally, based on reports made earlier today by municipal officials.

Nonetheless, Jersey City Mayor Steve Fulop is taking what he called aggressive steps to minimize the potential of the virus, which the World Health Organization has labeled a global pandemic, from taking root in the multi-ethnic community which ranks No. 2 in population in the state.

Among the precautionary measures being enacted are cancellation of city-sponsored events, including the annual St. Patrick’s Day Parade; cancellation of private events on city property; appointment-only visits to City Hall; waiving (for now) permit parking renewals; mandatory customer sign-in sheets for eateries and entertainment venues that hold more than 25 patrons; and a 10 p.m. curfew for any and all commercial establishments that have a liquor license.

And in the public school system, which has an enrollment of approximately 30,000 children spread among 40 schools and early-childhood centers, Superintendent Franklin Walker said the local district is conferring with state health and education officials about possible school closings and remote instructional programs. In the meantime, Walker said school personnel have been disinfecting classrooms, bathrooms and buses.

“We always want the city to be a leader and proactive in protecting our residents,” Fulop said. “In this case, we are taking reasonable steps and giving clear direction to the community on expectations. We are asking our residents to help us in keeping our community safe.”

During a press conference held in the city’s Office of Emergency Management in the firehouse at 715 Summit Ave., Fulop reiterated that there have been no confirmed cases of the coronavirus reported.

This, he said, despite a scare on Wednesday stirred by the unscheduled appearance at City Hall of an unidentified visitor who told security personnel that “his father had tested positive” for the virus, the mayor said.

But city Public Safety Director James Shea later added that the male visitor – who was wearing some type of surgical mask – never got into the interior of the building. Instead, Shea said, he was taken for a medical exam.  Shea didn’t elaborate.

A preferred scenario, Shea said, would have been for the man to have called a 24-hour hotline – 201-547-5208 – or to have checked out the city’s dedicated webpage, www.jcnj.org/coronavirus, for information and continuous updates.

The city is advising persons who suspect they’ve been exposed to Covid-19 to self-quarantine and to call the city’s hotline. “To avoid overwhelming our medical facilities, and if you believe you may be infected, DO NOT use public transportation to our hospitals. We will direct you on where and how to go,” a city press release says.

To date, four people in Jersey City have been tested for the presence of the virus, according to Dr. Shatrughan Bastola, Jersey City’s health officer. “Three of the four were absolutely negative,” Bastola said, “and one we’re waiting for results from the CDC (U.S. Center for Disease Control).”

It’s unclear whether the City Hall visitor was included among those statistics.

Bastola said he was aware of 14 or 15 cases of self-quarantined individuals in Jersey City, all of whom, he stressed, were exposed healthy individuals.

Jersey City Medical Center and LabCorp, which is also based in Jersey City, have both been approved to test for the virus by the Centers for Disease Control and have already begun doing so, according to Stacey Flanagan, city director of Health & Human Services. Test samples are forwarded by courier from those sites to a New Jersey public health environmental lab in Ewing Township for analysis, Bastola said. Results are then made available to the local health officer, he added.

Safeguards are also in place at Liberty International Airport in Newark, according to Flanagan and Bastola. CDC staff stationed at the airport check passengers who’ve been to “hot zones” for possible quarantining. But even if those passengers are judged to be asymptomatic, their names and relevant information are provided to local health authorities in their respective cities for monitoring by those authorities.