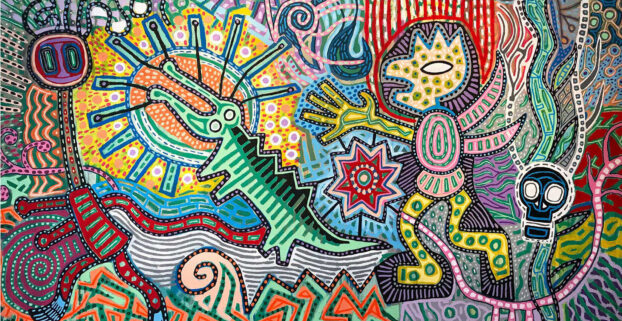 If you’re old enough and you’ve been in Hudson County long enough, you’ll remember a store on Washington Street in Hoboken called Hand-Mād. It was a gallery and curiosity shop with a particular character: Most everything on sale was colorful and playful, indebted in equal measure to Native American art and mid-20thcentury underground comic books. Pieces looked like they could have been plucked off of a totem pole designed by R. Crumb. Most of this art was figurative even if the figures themselves were surreal. Every abstract, cartoonish face in the store looked as though it was eager to have a relationship with you. Hand-Mād was an extension of ‘80s Hoboken’s oddball personality, and like many shops in town then it spoke in an unequivocal voice. It said: If you are a freak, a strange native, something of a cartoon character yourself, you’re welcome here.

Downtown Jersey City rarely sends visitors a message like that. But the show currently on view at the Novado Gallery (110 Morgan Street) sure does. The work on display in “Dan Fenelon: Primordial Pop,” which runs through Nov. 8, is an accidental but unmistakable callback to the Hand-Mād aesthetic. This show is unusually cheerful and personable. Instead of the weathered industrial greys and corrugated textures common to Hudson County visual art, Fenelon’s canvases and sculptures are full of PlayDoh-bright colors. A typical Fenelon work is busy with thick lines that separate distinct chromatic regions; like Keith Haring, he pushes his shapes, images, and designs to the edges of the canvas and implies that there’s a life for them far beyond the frame. Nothing here feels retrieved from the trash or even recontextualized. It’s just the vibrant contents of Fenelon’s brain.

That brain is populated with fever-dream characters — part mythological, part Muppet. Some resemble Southwestern animal spirits or Mesoamerican gods, others seem borrowed from the back pages of the weirdest Caldecott Award-winning children’s books. The eyes of these beasties sometimes gaze upward. Sometimes, they’re blank, like those of a hungry animal caught mid meal. Sometimes, they’re looking straight at you. Inherent in their gaze is a challenge: Make sense of us if you can. There are feline heads, there are skulls on springs, there are lizards and leering imps, and there’s an eight-foot-tall statue of a multi-colored cat, hands on hips and looking rather self-satisfied. Fenelon’s kingdom is not an entirely peaceable one, but there isn’t much menace in this work — in fact, this is the rare Hudson County gallery show that it’s easy to see a child enjoying.

In part, that’s because the best pieces in “Primordial Pop” are essentially toys. They’re little dolls, impertinent and bossy, and loaded with personality. Three of them stand on a shelf together in the back of the gallery, surveying the room with looks that hover between curiosity and dismay; my favorite is an orange- and green-faced dog, but I also love the serrated-beaked duck (or is it a dinosaur?). Fenelon places a family of these characters on painted platforms protruding from a trio of skateboards. It’s like an iconostasis designed by FAO Schwarz. For the show’s single most impressive piece, he hangs the dolls between the swinging planks of a gigantic mobile. There they’re sheltered but also vulnerable, subject to the vagaries of air currents and the grabbing hands of the mischievous.

All of these objects have been generated by 3D printers, which suggests that Fenelon, like any other manufacturer of kids’ curiosities, could produce many copies of them. You might be a little skeptical about the aesthetic possibilities of printers; “Primordial Pop” makes a solid case that, in the right hands, 3D imaging is as good as any other method of creating sculptures. And if you believe that there’s real artistic significance to action figures and Looney Tunes — and of course you do — you might even call it appropriate, maybe even optimal.

On view through Nov. 8 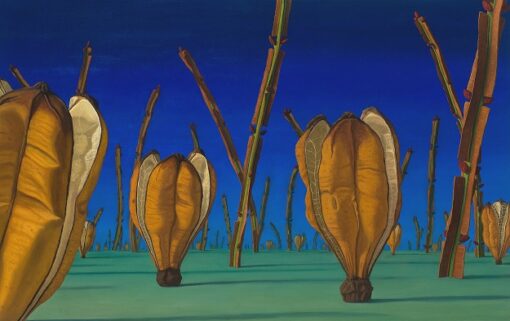 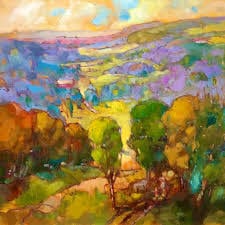