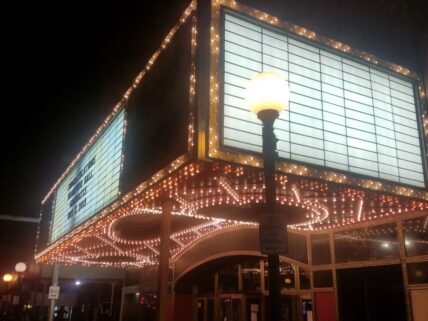 Friends of the Loew’s, the Jersey City-based non-profit organization that has worked to keep the Loew’s Jersey theater in operation since 1987 and that has been in litigation with the city since 2013 will cease to have formal ties with the city at the end of this month when its contract expires. Despite these circumstances, the volunteer-run group will remain involved in the Journal Square landmark theater for at least the immediate future.

Professional theater management companies are also vying to run the theater going forward. Just who will get the rights to do so and to perhaps reshape the mission of the theater in so doing has been hotly debated for more than six years now.

In November 2013 Mayor Fulop informed FOL that he planned to replace them with a professional theater management company. This spurred the nonprofit group to file a verified complaint against Jersey City, citing several charges including breach of lease and breach of covenant of implied/explicit good faith and fair dealing. Last year County Superior Court Judge Hector Velazquez sided with FOL, stating its lease was valid and paving the way for them to continue as sole operators of the theater for the duration of its contract. 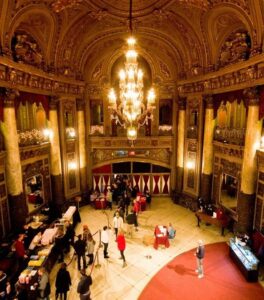 Photo courtesy Friends of the Loew’s Facebook by Garrett Ziegler

The Landmark Loew’s Jersey Theatre is located at 54 Journal Square across from the Journal Square Path Station. The well-known theatre is one of five movie palaces opened by The Loew’s Corporation in 1929 and features a stage and as well as a movie screen. The building’s extravagant design was meant to inspire moviegoer’s awe. As guests waited for movies to begin, they would be entertained by an organist who would rise from below the stage and play.

To the extent that FOL wishes to remain heavily involved in the theater’s future, it has a lot to do with the group’s history, accomplishments, and priorities. Executive Director Colin Egan attracted volunteers to restore the theater all of who shared a common interest in preserving the movie palace. “That’s a unique bond, and it speaks the kind of emotions that this building and a lot of the old buildings developed in their own communities,” he said.

Equally important to Egan and to Pattie Giordan, Egan’s cofounder and president of FOL, is the culturally diverse nature of the cinema’s offerings. In March, for instance, there will be a Filipino concert at the venue (something FOL is producing despite its contract ending). Dramas created by children are also expected to be shown.

Egan recognizes that should a professional theater management company take over the landmarked venue, it will likely result in further restoration of the property, which is a good thing for everyone. He simply does not want the theater to be “seen solely as just another commercial pop venue palace.” For him as well as for Giordan, the theater’s affordability is also a priority.

While certainly facing a transition this year, FOL remains optimistic.

Giordan noted, “The city has invited us to sit down and talk with them about the next step. “I am certain one way or another FOL will still be here.” Egan confirmed his colleague’s sentiments. “We will be in the position, one way or another to preserve the history, the community involvement, [and] the art programming.”