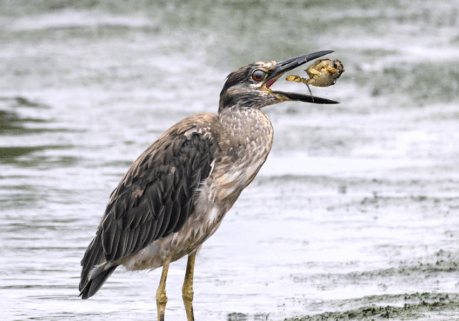 On January 11 at 11 a.m. the Friends of Liberty State Park together with NY/NJ Baykeeper will lead a rally to protect a magical piece of land at the southwestern corner of Liberty State Park called Caven Point.  At issue is a billionaire’s proposal to turn one of the last remaining salt marshes in the New York metro area into three holes of a nearby luxury golf course. If this sounds like a bad joke, it isn’t.  This proposal is deadly serious and it must be rejected.  We wholeheartedly support this grassroots effort to stop the wanton destruction of this precious natural habitat.

It was thought that this issue was settled in 2018 when the DEP rejected this privatization plan.  The Liberty State Park Protection Act, which has been under consideration by the legislature since January of 2019, would protect the park, and specifically Caven Point, from privatization and commercial development.   The Act is now finally coming up for a vote, but lobbyists for the golf course have asked that it exempt Caven Point.  Such an exemption would make it possible to destroy this one-of-a-kind habitat in order to provide multi-millionaire golfers with a better view of lower Manhattan.

In her stunning photos, local photographer and blogger Shayna Marchese (shaynamarchese.com) has documented the cornucopia of wildlife that calls Caven Point home.   According to Marchese, approximately one hundred species of birds make their nests at Caven Point; close to two hundred bird species have been observed there.  The profusion of wildlife includes falcons, egrets, herons, kingfishers, wrens, swallows, owls and seals, to name just a few.  As you stand on the boardwalk and take in the upland meadow, saltwater marsh, maritime forest, tidal pools, tidal mudflats, and the longest natural beach in Upper New York Harbor and the Hudson River, a visitor to Caven Point can only think, “This is what New York harbor must have looked like before it was settled.”  That it exists at all in 2020 is truly remarkable.  Yearly, Caven point serves as a living classroom for hundreds of local kids who learn about wildlife and the environment.

Alas, Caven Point has the misfortune of lying next to the most expensive golf course in history, Liberty National Golf Club.  Built in 2006 by billionaire Paul Fireman, the club boasts an on-site helicopter pad, yacht services, a spa, and a restaurant.  Should you have the $300,000 required to join, you may rub elbows with members Rudy Giuliani, Eli Manning and Mark Wahlberg.   It is a club by, for, and of the uber rich. It could be worse however. Fireman previously sought to build a gargantuan ninety-five-story Las Vegas style hotel and casino next to Caven Point.   A company called Suntex tried to build a massive marina a stone’s throw from Caven Point.   Fortunately, those potentially calamitous efforts were resisted and came to naught.

Now, in a cynical attempt to peel away opposition to his current proposal, Fireman has told State Senator Sandra Cunningham, “first prime sponsor” of the Act, that he will fund a golf school for disadvantaged kids if he is given the right to destroy paradise.  Senator Cunningham has said there should be room for “compromise.”   But there is no “compromise” short of allowing Fireman to bulldoze this priceless, unspoiled spit of land.   Simply put, his three-hole golf course and Caven Point cannot co-exist.   If Fireman is sincere in his concern for urban children, he can use the golf course as it exists for his school or build a facility somewhere else in Jersey City with his billions.   If he wants to move three holes of his golf course, he can ask Jersey City and the state to make other land available for his golf course expansion.    An unused twenty seven-acre parcel of land, owned by the federal government, sits idly next to the golf course.   There are options that don’t involve the devastation of this pristine habitat.

Caven Point is a small, ecologically sensitive twenty one-acre piece of land.  It is unique, precious and fragile.  There isn’t room on it for herons, falcons, seals and golfers.    It’s time for Governor Murphy and Senator Cunningham to stand up and affirm that Liberty State Park will not be sacrificed at the altar of the ultra wealthy.  They need to tell Mr. Fireman that if he and his fabulously rich buddies want good views on their golf outings, they can get them from their helicopters.

Details on the rally and how you can reach our elected officials can be found at: https://www.folsp.org/preservation/support_rally_governor.html