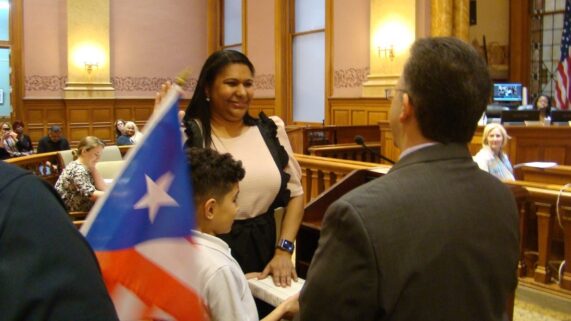 The Jersey City Council’s agenda Wednesday night included votes on an ordinance for 24/7 security for city-run senior housing and a tax on short-term rentals throughout the city. Before the council cast its vote to appoint Joanne Rosa as the new director of human resources for Jersey City, two council members accused another member of sexism.

“Maybe (Ms. Rosa) has vast skills and vast experience, but based on her resume it doesn’t match what the city of Jersey City is looking for as director of human resources,” Ward D Councilman Michael Yun said.

“Rosa has been working in the HR department for many years,” Platt began. “She has superior knowledge and experience related to civil service, the rules and regulations governing public employment. We did a very wide search, but it’s rare to find somebody who has that level of experience. It’s a key component to be working in HR here, and she has it.”

Thunderous applause from Rosa’s family and friends followed Platt’s glowing praise, and Councilman Yun had to back-pedal his comments.

“It’s not personal,” Councilman Yun said. “It’s my job as a councilperson. In the last six years, I saw what happened to our HR department, so please don’t take it personal.”

“It’s almost like a downgrade in public that you’re trying to do,” Councilman Rivera said. “This is borderline sexist. If you don’t want to vote for her, just vote ‘no,’ and we move on.”

Councilwoman Mira Prinz-Arey said she thought some of her council colleagues seemed to be harder on women directors.

“I’ve been on the council two-and-a-half years,” Prinz-Arey began, “and I’ve seen a couple of appointments during this time. Some of the men that were appointed did not get this public berating from the dais. I can’t just sit by and listen to that. In addition, I think there is a lot of value of someone working their way up. I know Joanne you have a lot of work to do. I vote I and wish you the best.”

Council President Joyce E. Watterman cast a “yes” vote and spoke directly to Rosa, who was seated in the second row of council chambers.

“Rosa, I know you’re a phenomenal woman,” President Watterman said. “This is your moment. This is your night. It’s an honor for me to say ‘yes’ to appointing you HR director

A second-reading ordinance to mandate that senior and disabled housing with 75 or more units have security personnel 24/7 was brought up for a vote. Opening it up to public comment, City Clerk Sean J. Gallagher invited Jayson Burg to the podium.

“My friend William who passed away a couple of years ago had been fighting for this for many years. I’m glad it finally came in (for a vote),” Burg said. “Planning for 75 units is good, but what if you’re in 50 or 25? I mean this is far short from security, it’s insecurity.”

Councilman Yun addressed Burg’s concerns and said the ordinance was a mere first step toward addressing the problem.

“We are going to pass this one and implement the plan, and we’re going to see if they’ll be fine,” Councilman Yun said.  In the future if we see 50 units is better, we’re going to amend it, but this is the first step.”

In support of the ordinance, LaVern Washington said the council should consider amending the ordinance to 40 units now rather than later.

“We have senior buildings that really need this ordinance,” Washington said. “I have seniors that I take home from church on Bergen and Forest Street. The building has like 40 units, and there’s a lot of gun shooting around there, and on the weekend, they have some security, but during the week there’s no security. Then on Ocean and Dwight the building the housing authority built — it’s not 75 units, but these buildings are in the heart of the community where there’s a lot of drug activity, gang shootings. You have to address this now more than later.”

The council approved the ordinance 8-0.

The council addressed the second reading of an ordinance to adopt amendments to the hotel occupancy tax that would make the tax apply to short-term rentals and not just to hotels. The ordinance is meant to capture revenue from those short-term rentals, Corporate Counsel Peter Baker said.

When asked how much revenue came in from the hotel occupancy tax last year, Councilman Yun said the city collected approximately $2 million. With the passage of the ordinance’s amendments, short-term rental platforms like Airbnb would collect a six percent tax.

The council passed the ordinance 8-0. 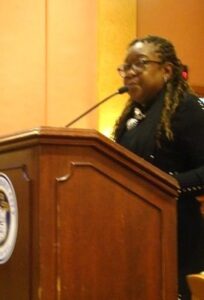 The ordinance to adopt amendments to create a sewer easement and add floors to a new housing development received some back-and-forth from members of the Morris Canal Coalition and the Fields Development Group of Jersey City. The Fields company wants to increase the building they had proposed from 16 units to 24 units.

June Jones of the Morris Canal Coalition, which holds monthly meetings with the community about development projects, asked the council to require Fields Development Group to produce renderings of the proposed building before casting their votes.

“They’re asking us to give them an amendment to a project from 16 stories to 24 stories,” Jones said. “What is it going to look like? There are clear violations that are taking place with this project.”

Urban planner Ed Kolling addressed the council and explained that a sewer line was discovered after the building plans had been drawn up. When it was discovered, the developer, Fields Development Group, met with the Jersey City MUA (Municipal Utilities Authority), and they agreed it would cost $12 million to relocate that sewer line and the cost would  ultimately get passed on to the users, Kolling said, so to be cost-effective, the most efficient way was to take the building and squeeze it down. It would go on one side of the easement, and then the building would go a little taller. 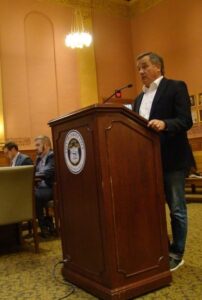 The council approved the amendment 6-2 with Councilman Yun and Councilman at Large Rolando R, Lavarro, Jr., voting ‘no.’

Please note:  Due to coronavirus precautions, the City of Jersey City has cancelled future Council Meetings until further notice.

Header:  City Clerk Sean J. Gallagher swears in Joanne Rosa as director of human resources as she puts her hand on the bible, held by her son David Comee. Photo by Sally Deering.