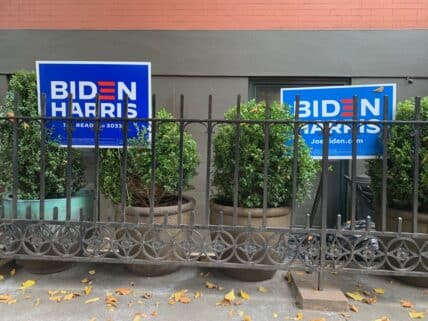 With under two weeks until the general election on November 3, organizers in Jersey City are working toward reaching swing state voters and electing Joe Biden.

The volunteer effort, Jersey City for Biden, is run by NJ-08 for Progress, a Hudson County progressive advocacy group that formed in the aftermath of the 2016 election.

“Our pattern has been in major election years like 2018 and 2020, we’ve done a lot of work in the general election,” explained NJ-08 for Progress organizer, Eleana Little. “In 2018, we worked in swing districts. In 2020, we’re doing a lot of virtual phone and text banking to swing states. At the same time, we’ve been active throughout, particularly in odd number years, more local, progressive issues as well.”

In 2016, organizers behind a similar volunteer effort—Jersey City for Hillary–worked with the Clinton presidential campaign to organize phone banks, in-person events in Jersey City, and buses of canvassers to Pennslyvania. In 2018, NJ-08 for Progress actively organized phone banks and canvassers in swing districts throughout New Jersey.

“We wanted to bring the experience that we had in 2018 and bring it to 2020 in terms of mobilizing volunteers for voter outreach,” said Little. However, the Covid-19 pandemic has suspended in-person campaign organizing.

“It’s definitely a challenge. I think we would love to be all gathering at someone’s house and ordering a pizza and making phone calls and writing postcards and things like that,” said Little. “People are driven and motivated and want to see a change.”

Although in-person campaigning is not feasible, Jersey City for Biden hosts four weekly events on Zoom that can draw up to 30 dedicated volunteers. A favorite event, Sundae Banking, hosted on Sundays, makes the virtual gathering fun for volunteers. “The picture for the event is Joe Biden holding two ice cream cones. We take a break in the middle and we all treat ourselves to ice cream at home, just decompress for half an hour,” explained Little.

In addition to contacting swing state voters, the Jersey City for Biden focuses their efforts on NJ-03 and NJ-07, two congressional districts that flipped from Republican to Democrat in the 2018 midterm elections.

For Jersey City for Biden organizers like Little, reaching undecided voters in swing districts and swing states in the final days leading up to the election is imperative “Even if you feel like Biden was not your first choice and maybe not as progressive as you would like on certain policies, we would much rather be working with a Biden presidency and pushing him to be more progressive than working with a Trump presidency where nothing good will be coming out of it at all,” said Little.

With this perspective, Little continued: “We’re not bugging our friends in Hudson County to go vote for Biden because we know Biden’s going to win Hudson County in a landslide. We’re spending our time where matters most. If you feel like your vote doesn’t matter, one way to make a difference is to reach out to voters in other states.”

To get involved with Jersey CIty for Biden, visit their Facebook group or sign up for their newsletter.