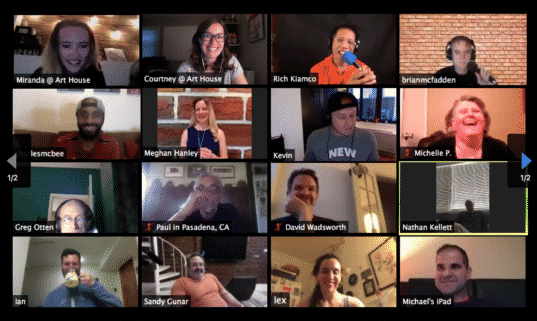 The festival, produced by Art House Productions, was originally scheduled for live, indoor shows in June and postponed for safety reasons. Ultimately it was moved to Zoom in August. Now it’s four days of pandemic-safe entertainment.

“This four-day virtual comedy festival will be as lively and interactive as possible!” said Meredith Burns, executive director of Art House. “We’re hoping that the 2021 Comedy Festival will be an in-person event. In the meantime, we are very excited about the virtual possibilities!”

“Essentially what we are trying to do is recreate the live experience as much as possible. We are interested in hearing the audience react. This is not a streamed event. This is a live, virtual event where the comics will see the audience and vice versa and the audience will see the other audience members. We’re all in one big virtual room together breathing and laughing!”

However, trying to organize an online comedy festival during the pandemic isn’t all fun and games. Economically, it’s been tough. “We haven’t been able to secure the same sponsorships as we did in the past. Unfortunately, it’s a tough market for that right now. I also think sponsors might not understand the value of virtual events in the same way, but I’m optimistic that will change in the near future as they see how beneficial it can be for their brands,” Burns said.

On a bright note, ticket sales are about what they were last year at this time. “I think more people will buy closer to the events themselves and the day of,” Burns said.

In 2017, Burns founded the “Sixth Borough Comedy Festival” with fellow comedians Rich Kiamco and Ari Miller as a way to ensure more diversity and inclusion in comedy festivals. “We had performed at comedy fests around the country and found them to be overwhelmingly white, male spaces. We’ve made diversity and inclusion the hallmark of the Jersey City Comedy Festival.” The first night of the festival, on August 12, is part of Jersey City Pride.

In 2017, the domain for “Jersey City Comedy Festival” was not yet available. It was still owned by the original Jersey City Comedy Festival’s founder, comedian and artist Craig Mahoney. In 2019, the domain was up for grabs, and Burns and crew reappropriated the name. Miller moved to Los Angeles in 2018. The management team now includes co-producers Xavier Padin and Janelle Gaeta, Art House’s Producing Director Courtney Little, and Theater Manager, Miranda Dahl.

Also new to the festival is a “Jersey Strong” showcase on Friday night at 10 p.m. All of the comedians who will be in it are based in or from New Jersey. Although many of the comedians in the entire festival hail from New Jersey, this particular showcase is named for its strength, a phrase coined by Governor Murphy. As Burns gushed with pride, “I think people from New Jersey have a certain toughness about them that can perhaps be misinterpreted, so I think the governor is affirming that our strength is a positive thing. We’re so used to being the butt of every joke, but in actuality the big secret everyone in New Jersey knows is we’re the best state in America.

She continued, “We have the best of everything here. The best people, the best schools, the best beaches, the best restaurants, the best pizza (shout out to Razza), the best artists (Meryl Streep, come through!), the best cities, the setting of the best TV show of all time (The Sopranos); the only thing we’re missing is great mountains, so I guess you can’t have everything! I’ve been to four continents and 32 states, and I’ve really liked a lot of places, but New Jersey is special.”

Comedian Alex Grubard, a Jersey City resident featured in the Jersey Strong showcase, says, has a slightly different opinion, “Jersey’s strength comes from years of questionable construction contracts. Like when you duct tape something together over and over even though it probably was never broken in the first place.”

It’s his first time doing Jersey City Comedy Festival. Regarding the virtual nature of the show, he said, “I’ll miss running into lots of comics all around town like at a comedy festival with lots of live shows, but the lineups are good, and I’m excited to see everyone perform.” He plans on doing his set from Corgi Distillery where he has a live show earlier that night.

Last year the festival roasted Mayor Fulop, which he described as being, “as enjoyable as it sounds.” This year, Character Assassin will roast Harry Potter. Character Assassin is a comedy troupe based in of Louisville, Kentucky with chapters in New York and Chicago. The troupe specializes in roasting fictional characters and historical figures. According to Andy Fleming, producer of the Chicago chapter, “Character Assassination is just like your classic Friars Club or Comedy Central-style roast but with beloved pop culture figures (or really anything) instead of real people sitting on the dais with each character played by one of the funniest/meanest stand-up comedians we know.”

When I asked him why roasting people real or fictional brings people together, he said, “Honestly, the roasting of a fictional character is what brings people together the most for me because no one’s actually getting their feelings hurt. I would never say to Daniel Radcliffe’s face the terrible things that I have said to people playing Harry Potter. For one, I can’t get close to him because of the restraining order.”

It will also be the first time the group is doing their show via Zoom although Fleming says, “I think it’s a format that lends itself perfectly to the roasts. Instead of a dais, you get a Brady Bunch-like grid of these characters telling each other to go fuck themselves!”

He quipped, “[P]ersonally, I grew up a huge Sopranos and Kevin Smith fan, so visiting Jersey has always been a dream of mine!”

I asked Burns why JCCF wasn’t roasting locals this time around like a rich developer, for example. Burns responded that having a group with a broader target audience was for the greater good. “Character Assassination is roasting Harry Potter, and we’re assuming they might throw in some jokes about J.K. Rowling given her recent twitter performance,” she said. “The interesting thing about this event now being virtual is that it opens up our target market! You can Zoom in from anywhere in the world, and we want to make sure that the events we’re presenting are for everyone, not just for people who live in Jersey City and are aware of the key players.”

Other changes? Emerging comics only and cash prizes. In the past, comedians like Gilbert Gottfried have headlined, but this year the money is going to comedians. “This is the first year we’re offering cash prizes,” said Burns. “We made the choice to forego bigger-name headliners and offer cash prizes to the emerging comics. This is a challenging time for artists, and we’re trying to support them as much as we can.” In the past the prizes consisted of performance opportunities at other venues.

The festival culminates in The Best of the Fest competition on Saturday night, which brings us to a final plea from Burns:

The industry stand-up pick will also receive a one-month residency of primetime spots at Broadway Comedy Club, courtesy of TheIndustryRoom.com.

The Jersey City Comedy Festival runs from August 12–15. Tickets are $10–$15. Discounted festival passes, which include one ticket to each event, are also available for $45.50. For more information and to purchase tickets, please visit www.JerseyCityComedyFestival.com. 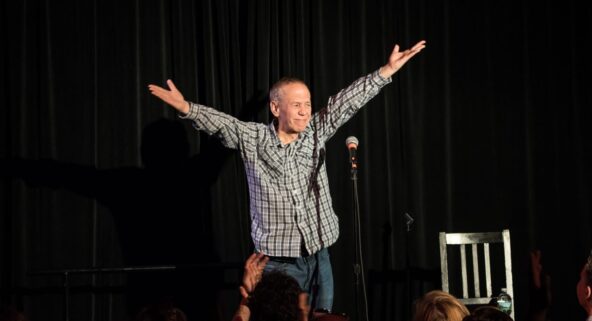 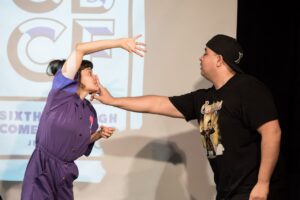 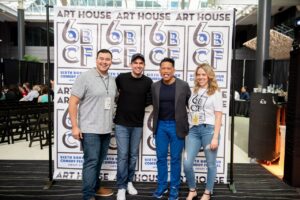