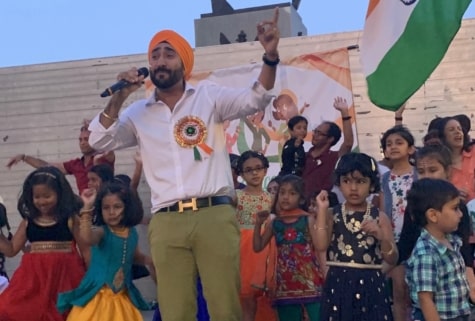 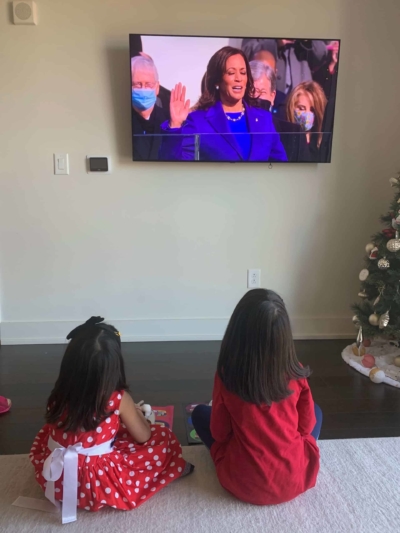 Harris, born to parents who emigrated from India and Jamaica, became the second Black woman and the first South Asian American to serve in the U.S. Senate in 2016. She ended her own presidential campaign in December 2019 before former vice president Joe Biden chose her as his 2020 running mate. Biden and Harris were elected in November and sworn into office on Jan. 20.

On inauguration day, Shehnaaz Jagasia, founder of Shenaaz Dance Academy, watched intently with her young daughter in their Jersey City living room. In another room, her eight-year-old daughter was watching the inauguration virtually with her third grade class.

The occasion was so special they replayed it on YouTube so they could all watch together.  They shared the experience on Instagram.

“We’ve been reading about Madame Vice President and found out she loves dosas and South Indian food, so we watched together while eating dosas. It felt so good,” she said.

Jagasia and her husband are from Mumbai, India. She has been teaching dance in Jersey City since 2009 and started her own dance school in 2017.

“We are elated she is elected to office,” Jagasia said of Harris. “It’s a moment of pride to have that representation.” Harris sets “a stellar example” for her young girls, she said.

Downtown Jersey City resident Mamta Singh, who has run the nonprofit JCFamilies since 2010, was so excited by Harris’ inauguration that she called her relatives in northern India to share her enthusiasm. Their joy, too, was palpable.

“My family from home feels as if one of their family members got elected,” she said.

Singh said she has aspirations to be involved in politics, but “there was always a hesitation because we come from a very different background.” She now feels more optimistic about the future of women in politics.

“A lot of women who were just hiding or not very confident will come out and get active,” Singh said. 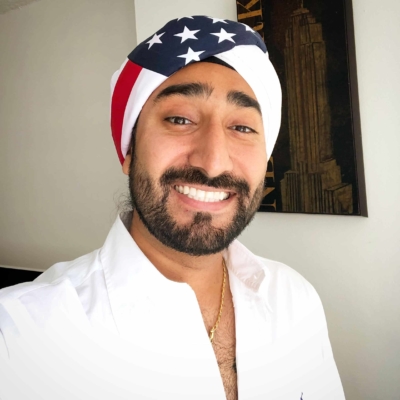 Harveer Singh, a downtown Jersey City resident and realtor, emceed the India Independence Day Parade in 2019. He described an electric atmosphere the day the presidential race was called for Biden and Harris, complete with music outside City Hall and a woman dancing on top of her car. The diverse crowd reflected what he loves about Jersey City.

Harris’ victory feels personal to Singh as a member of the Sikh religion, which values “equality for men, women and everyone.”

“As a Sikh person who wears a beanie, sometimes you get the brunt of ignorance,” he said. “I’ve gotten that all my life. I think [Harris’ win] gives people courage, women courage, minority women courage.”

Members of Jersey City’s Indian American community told the Jersey City Times they have a deep love for the city.

“Jersey City was my first love because of the diversity,” said Mamta Singh. “It felt like home, and I decided if I ever lived in America, I would live in Jersey City.”

They also shared hopes for the new presidential administration.

I hope the government will do something exceptional for our teachers to applaud their efforts and provide them additional pay and/or benefits,” said Jagasia. “So many of them have had to adapt to the virtual world.”

“The biggest concern is uniting the country,” Harveer Singh said. “I pray and hope that Biden can do something to bring us together.”