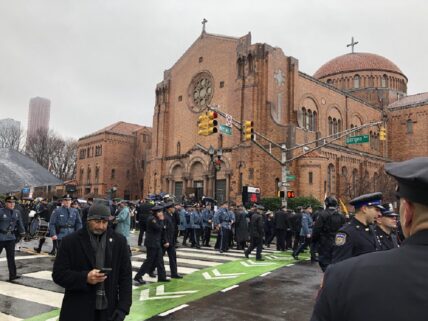 This story originally appeared on ThePauwWow.org, the student newspaper of Saint Peter’s University.

On Dec. 17, St. Aedan’s Church on Bergen Avenue was filled to the brim with family members, friends and police units to mourn Detective Joseph Seals, who was slain in the line of duty on Dec. 10.

Presided over by Cardinal Joseph Tobin from the Archdiocese of Newark, the funeral was attended by U.S. Attorney General William Barr, New Jersey Governor Phil Murphy, New Jersey Attorney General Gurbir Grewal and Jersey City Mayor Steven Fulop, among other civic and religious leaders from all denominations from around the country. 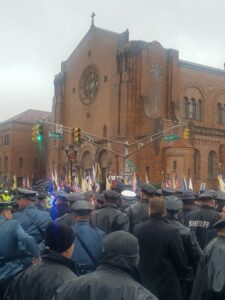 The weather, which was cold and rainy, reflected the solemn sentiment on the inside of the church. Blue and black ribbons lined the pews, and Seals’ casket, which was brought from McLaughlin Funeral Home in a police-escorted procession, was adorned with an American flag.

Throughout the service, Seals’ honorable character was consistently brought up. The eulogizers praised his work as a police detective who worked to remove guns from the streets of Jersey City and who loved his job and the city that he served; they noted that he died a hero far too soon.

Seals, 40, was killed on Dec. 10 in a confrontation that began in the Bay View Cemetery in the Greenville section of Jersey City and that led to the deaths of five others, including the two assailants that killed him. Officials are now labeling the crime an anti-Semitic attack on the kosher grocery store.

In McGinley Square Pub on Montgomery Street, Angelo Hatziptrou stands by the belief that the violent incident does not represent Jersey City as a whole.

“Shootings can happen anywhere,” he said behind the bar of the pub he’s owned for five years.

Despite the rain, which did not let up at all during the service, bystanders stood behind the barricades to watch the funeral procession and wait until the casket left the church.

Due to the procession, streets such as Bergen Avenue were closed to accommodate the throngs of civilians and police officers in attendance.

On Friday, the Stephen Siller Tunnel to Towers Foundation, a charity whose mission is to assist firefighters, police officers, and members of the military who have sustained critical injuries or lost their lives while serving their country, announced that they would pay off Seals’ mortgage. An official GoFundMe campaign for Seals’ family has raised $575,000 as of Dec. 17.

Seals leaves behind his wife, Laura and five children.