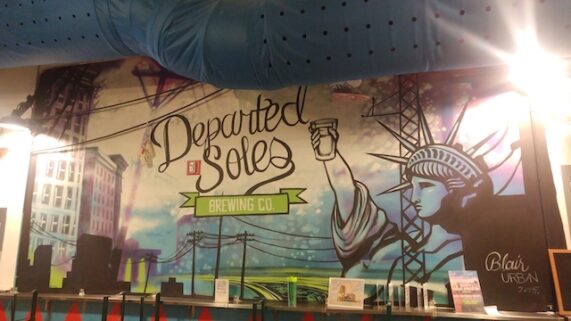 Alcohol tourism is a serious industry. Jersey City may not be wine country, but in just the past four years, it has become home to a craft brewery and a distillery, and another brewery is on the way.

Could Jersey City become a highbrow booze destination? Quite possibly (though the parking alone is enough to drive you to drink).

Drinking habits in Jersey City have changed since I was a kid. Instead of drinking a 40 of malt liquor at a construction site on the waterfront (and there’s nothing wrong with that), you can now drink a barrel-aged limited release bomber from the brewery down the street. 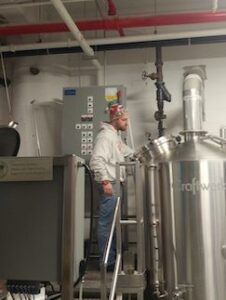 “We get tourists from out of state, people staying at hotels,” said Brian Kulbacki, owner of Departed Soles Brewing Company, which opened in downtown’s Power House District in 2015.

The brewery is the first to open in Jersey City since the Lembeck and Betz Eagle Brewing Company closed on the eve of Prohibition in 1920. Coincidentally, it’s is a few blocks away from the site of the forgotten Lembeck and Betz Historic Brewing District (on Marin between 9thand 10thStreets), which was added to the National Historic Register in 1984. The last vestige of the brewery was demolished in 1997.

Departed Soles’ bright taproom showcases local art, shoes, and skateboards in addition to beer, a pretty good sign that it’s not your grandpa’s beer joint. Indeed, the whole point of the enterprise seems to be to be small and bespoke. They source barrels from local distilleries and have acquired some Jersey artisan distilling sorghum whiskey barrels specifically for aging gluten-free beer (of course). They are also going to attempt a rudimentary hard seltzer that would be available in the tap room only.

Meanwhile, 902 Brewing is on the verge of opening in Bergen-Lafayette.

“We have the brewhouse installed, fermenters installed, walk-in installed. Waiting on the utility hookups and a certificate of occupancy from Jersey City,” said 902’s COO and founder Colby Janisch. “Hoping that can happen before the New Year,” he added.

Originally a homebrewing experiment that began in his apartment at 902 Washington Street in Hoboken, since 2012, 902 has been “gypsy” brewing at other local breweries including New Jersey Beer Company in North Bergen (with which they expect to finalize a merger soon). The company decided to open a brick and mortar location in Jersey City rather than Hoboken, its first choice, because the former proved easier and more accommodating.

“Space, availability, and affordability in Hoboken, along with traffic was a serious issue,” Janisch said. “We tried in multiple places, but the zoning office was literally no help. They made it seem like a burden every time we tried to realize our dream.”

Ultimately, he said, it was “the mentality of being wanted versus being put up with” that helped 902 decide to break ground in Jersey City.

Janisch still homebrews, and when asked what his favorite 902 beer is, he proudly responded, “Call me lame, but Heaven Hell or Hoboken IPA is probably my favorite,” he said. “It’s one of my original home brew recipes that I tweaked over and over, and I think it’s a fantastically balanced American IPA. It’s not a trend chaser by any means, but it’s enjoyable to drink any day of the year. I’m proud of it.”

But he’s most proud of Brady’s Nightmare, he ranted, “We bragged about the Giants’ beating the Pats in two super bowls on a beer can and made a national ESPN article for it. I’ll tell my kids about that when they hear of the legend of Tom Brady. Tom, if you’re reading this, come try one at the new facility. It’s on me even though you’re unfathomably rich.”

Janisch also has reason to be proud of his congeniality. 902 has a great relationship with Departed Soles, he said, and the two businesses “definitely want to collaborate” and “build JC as a beer destination.” Likewise, Janisch is fermenting wild ale in gin barrels procured from another startup alcohol manufacturer down the block.

That manufacturer would be Corgi Spirits. 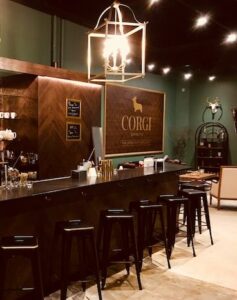 Corgi Spirits was founded in 2018, and specializes in potato-based gin.  It is the first and only craft distillery in Hudson County. Housed in a converted warehouse dubbed the “Jersey City Distillery,” it’s even got a street named after it: Distillery Way.

Corgi’s flagship gins are Pembroke and Earl Grey. In terms of flavor, both products tend to be a little floral and citrusy. They are highly accessible even to people who dislike gin.

The distillery, which features a tasting room, also specializes in barrel-rested gin comprised of smaller batches that have rested in whiskey barrels for eight months. Corgi produces vodka and whiskey as well.

Aside from the booze (and site tours that are available on weekends), there are plenty of reasons to visit Corgi Spirits: They offer live music, a monthly comedy show, and craft markets throughout the year. In the summer, visitors can enjoy a large outdoor patio and regular food trucks. There are also dog costume contests, including the annual Pride with Your Pup event in conjunction with Hudson Pride in August (although dogs are not permitted inside the distillery).

“Spend the day at Liberty State Park, stop by 902 for a pint, close your night with a cocktail here,” said Sara Healey, Corgi’s tasting room and events manager. “That’s a good day.”