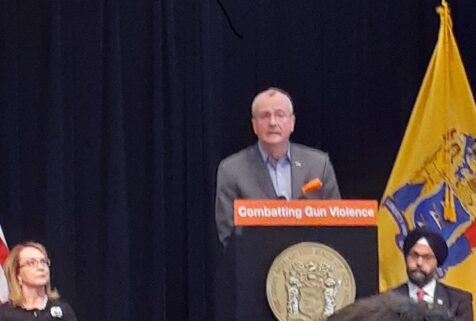 Gov. Phil Murphy announced Wednesday that the Jersey City Medical Center and eight other hospitals around the state will each receive $2 million in federal funds for violence-intervention efforts.

The grants, issued under  the Victims of Crime Act, will be used to assist hospitals to provide physical and mental health support to crime victims immediately after the violent incident and may include services such as tattoo removal, which could give the victims “literally a clean slate,” Murphy said.

Grewal said the winning hospitals were selected based in part on their work with local community organizations that fight violence. Such hospital intervention programs have been proven to reduce repeat injuries, he said. The Jersey City Anti-Violence Coalition is the local partner in Jersey City.

Often the victims of crimes are also perpetrators or future perpetrators, said Murphy, adding that the programs are designed to assist victims of any type of violence, including domestic abuse. He said New Jersey is the first state to award such grants to hospitals under the Victims of Crime Act.

In his brief introductory remarks, Fulop noted that he, the governor and Grewal have been spending a lot of time together in the past seven weeks since the tragic shootings on Dec. 11, which took the lives of Detective Joseph Seals and three civilians who were killed at a kosher market. Fulop also noted that while violent crime in the city is down, gun confiscations this month are up significantly. Police have taken 30 guns off the streets so far this month, compared to 10 in January 2019.

Giffords, who suffered severe head injuries when she was shot while meeting with constituents in her district in Tucson, Ariz., nine years ago this month, spoke briefly but succinctly. “Stopping gun violence takes great courage. Be bold, be courageous. The nation’s counting on you,” she told the audience.

Attendees included numerous local elected officials as well as about 20 women wearing red T-shirts with the words “Moms Demand Action,” the name of a national gun-control group founded in the wake of the shootings at the Sandy Hook elementary school in Newtown, Conn., in December 2012.

The grants will fund the nine sites for a period of 21 months, according to the governor’s office.

Beside the money dispensed to the hospitals, another $2 million will be used by the state for technical assistance, Grewal said.