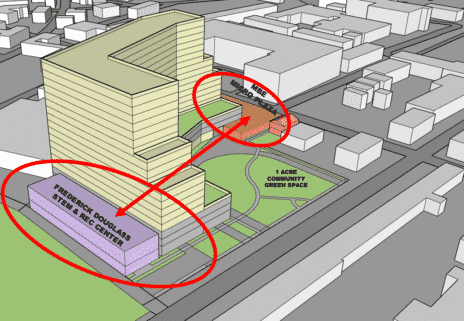 Tonight the City Council is scheduled to vote on ordinance 20-103, amending the Morris Canal Redevelopment Plan to create the “Berry Lane North Zone.” The amendment would allow for the construction of a gargantuan 361-unit luxury-housing complex known as “Morris Canal Park Manor” on three acres of land in Bergen-Lafayette formerly occupied by the defunct Steel Technologies facility. If this ordinance passes, it would constitute one of the most shameful developer giveaways in recent memory.  The City Council should reject this ordinance and return the plan to City Planning to craft a project that respects the wishes of the community and attempts to honor the longstanding policy of making this land part of Berry Lane Park.

As we laid out in an article on December 15th, the land in question was slated to become part of Berry Lane Park. The “Acquisition Map” of the 1999 Morris Canal Redevelopment Plan shows the parcel as one “To Be Acquired.” As recently as 2018, plans were afoot to buy the property on the city’s behalf.  An appraisal valued the land at approximately $3 million. The city applied for grants to buy it.  The grants were approved.

What happened? Bergen-Lafayette became the next hot neighborhood, property values soared and the property owner saw an opportunity to make a killing.

Let’s start with just what a valuable property the “Steel Tech” site became.  A back of the envelope calculation tells you why the developer wants to build this project rather than sell it to the city through eminent domain. For argument’s sake let’s assume that each of the 361 units is 750 square feet in size. Realtor.com tells us that upscale apartments in the neighborhood sell for $556 per square foot. That means that each apartment will have a value of approximately $417,000. The apartments – not including any retail and office units – will have a total market value of over $150 million. With help from the city and loans from the bank, investors have turned land they could have only gotten $3 million for two years ago into an extraordinarily valuable asset.

There’s nothing wrong with making money in America. The question is to what degree a municipality should relinquish control over land it has the legal right to use for a public good (like a park) to enrich real estate investors?  And if it does so, what should it get in return?

Proponents of the project claim that its “community benefits” more than justify rezoning the land to allow for a 17-story luxury monolith in a low-rise neighborhood.

Let’s start with the “benefit” of affordable housing. According to the plan, 5% of the units would qualify as affordable. That’s a paltry 18 units, the bare minimum under the city’s new inclusionary zoning ordinance and an amount that will do almost nothing to alleviate the affordability crisis besetting Jersey City. It imposes an almost inconsequential cost on the developer of such a large apartment building.

Then, proponents argue, the developer must build a 22,000 square foot recreation center/basketball court to be deeded to the city. So far so good. But the project has been sold has offering much more, including a rock-climbing wall, a sauna, dance studios, music studios, and a food concession. However, the developer isn’t required to pay for or operate any of these. When asked who would, Councilman Jermaine Robinson, the council’s primary booster for the project, pledged to “raise money” for it. Not reassuring.

And then what about the 14,000-square foot “Neighborhood Commercial Facility,” 40% of which will become space for ten minority owned businesses at below market rates?  Those only last ten years, after which they become market rate.

Finally, the project includes a 20,000 square foot outdoor public space that can be used for farmers markets and other public and private events. Who can criticize a public space for community events?

The problem is that the public will, in the end, have use of less than a third of the 3.3 acre parcel. The rest will go to the developer, land that was originally meant to be part of Berry Lane Park.

In a statement yesterday to the Jersey Journal, administration spokesperson Kimberly Wallace-Scalcione acknowledged that the city received millions in grants to acquire the property. But, she explained, the city couldn’t do so “without hurting taxpayers” since the asking price for the land was several million dollars above what the city had been awarded in grants.

First, the city has yet to account for all the grants. As JCT reported, the city may have already received more than $2 million for this purpose. The council should get this information before taking any action. Second, for the administration to claim that it is concerned here about “hurting taxpayers” when just a few months ago it rushed through a million dollar program to purchase “vertical gardens” to grow organic greens strikes us as a little rich.