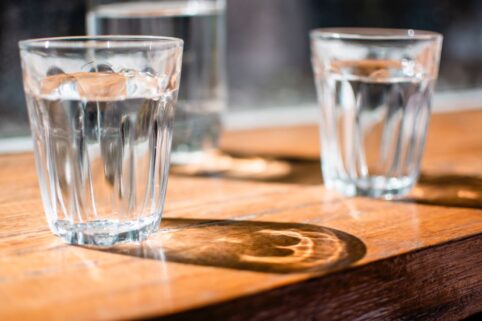 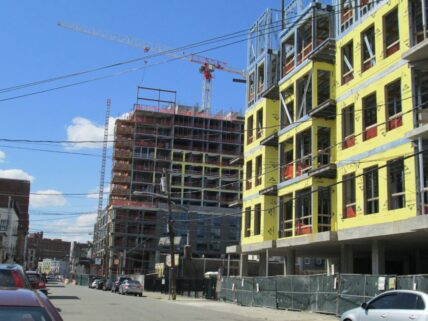 “Non-essential” construction projects have been banned throughout New Jersey since April 10, when Gov. Murphy’s Executive Order 122 to reduce the spread of the coronavirus went into effect. Still, due to the numerous carve outs in the Order, many building sites in Jersey City remain active. At the same time, other projects that qualify for exceptions to the ban have been halted.  As a result, many developers and construction workers are left scratching their heads — while also doing their best to make active sites impervious to the coronavirus. 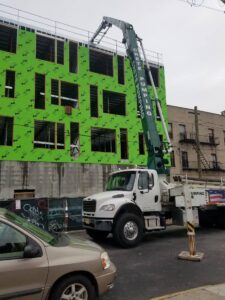 “Some of our employers and property owners are doing the best they can to figure it out —  some are going to lawyers,” said Greg LaLevee, business manager of Operating Engineers Union Local 825, whose members typically work on big construction jobs in the state including the new Rt. 7 bridge linking Jersey City and Kearny.

LaLevee mentioned a nearby project involving remediation —  one of the exceptions listed in the governor’s order —  that, he said, got shut down by local authorities. “That kind of baffled us,” he said.

Questions about who’s enforcing the order and on-site social distancing are still awaiting answers, he added. “I don’t think the full story’s been written yet. It’s going to take time to shake itself out.”

Three of the local’s 7,000 members have tested positive for the coronavirus, LaLevee said.

How vast does the shutdown appear?  Councilman James Solomon, whose Downtown ward hosts a lot of building activity, said recently, “[. . .] my reading of it is that most large-scale construction sites must shut down or be in the process of shutting down.” This is likely because the Order does categorize as “non-essential” residential projects with work crews greater than five and residential buildings with no units under sales contracts. But that still leaves numerous categories of construction the decree deems “essential”:

Most other types of construction are deemed “non-essential.”  That said, the Order does allow for “any work on a non-essential construction project that is required to physically secure the site of the project, ensure the structural integrity of any buildings on the site, abate any hazards that would exist on the site if the construction were to remain in its current condition, remediate a site, or otherwise ensure that the site and any buildings therein are appropriately protected and safe during the suspension of the project. It also permits “any emergency repairs necessary to ensure the health and safety of residents.” 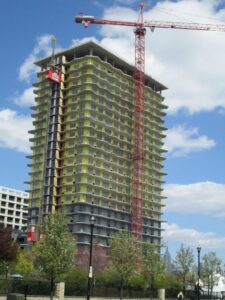 What has the city done in response to the governor’s decree? Mayoral spokesperson Kimberly Wallace-Scalcione said this:

“Following the Governor’s executive order, the city created an informational website for full transparency regarding all construction projects. The website includes a process for residents to file complaints, the feedback of which will be shared with the state. We are committed to protecting our residents the best we can within the parameters that have been set by Trenton.”

Residents are invited to email prosecutor@jcnj.org or call 201-547-4900 to report suspected violations.

The website has downloadable application forms for both types of construction. Once completed, Jersey City Construction Code Official Raymond Meyer reviews the applications for prospective authorization.

As of April 21, a total of 138 applications for essential and non-essential work had submitted to the city; all but 19 had been approved.

Based on a random citywide check this week, among those sites where workers — all wearing face cloths — could be seen going up and down exterior lift elevators, carrying lumber and tools, mixing cement and the like were:

Many of these sites were residential high rises.

No construction activity was observed at either 662 Summit Ave. (off State Highway 139) or 75 Jordan Ave. (between Vroom and Mercer Streets). The city has listed no reasons for the apparent stoppages. It’s possible the owners or builders concluded they failed to meet the criteria for continuing work and therefore never filed applications.

Assuming the city has allowed for a limited amount of work to secure a building before shutting down the project, neither the governor’s order nor the city has proscribed how long that work can continue. 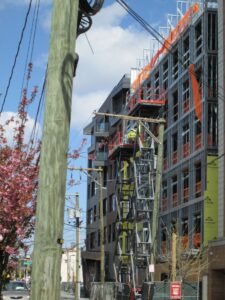 Jeffrey Wenger, former principal planner for Jersey City and now a private planning consultant, said it typically takes a week or more to wind down and secure a construction site by taking down a crane, installing tiles or strapping down materials on an upper floor, for example.

Indefinite setbacks caused by even the temporarily halting of projects will likely saddle developers with added financial pressures, Wenger said. “If you’re not going to meet your [completion] deadline, it will create strain with investors and lending institutions.  There’s a lot riding on the outcome; stopping a job will be a big deal.”

How big a deal?  Well, former Jersey City Redevelopment Agency director Robert Antonicello, who now runs a commercial real estate brokerage firm, posited: “For a $180 million project, which would be comparable to a Jersey City high-rise now under development,  it would not be unrealistic to expect that for every month the project is down, pending a lifting of the executive order, the owners would be hit with an additional $400,000 to $500,000 in insurance, interest reserves and other carrying costs that they would hope to pick up on the back end.”

How much of that added cost would get “eaten” by the developer or passed on to the building’s occupants remains an unknown at this point, Antonicello added.

Asked to assess how the city is handling enforcement of the executive order, Antonicello replied: “I don’t think the city has been careless with this. And remember, even the governor didn’t want to shut down everything.”

For more on the impact of COVID-19 in Jersey City, see Jersey City Times’ news section.