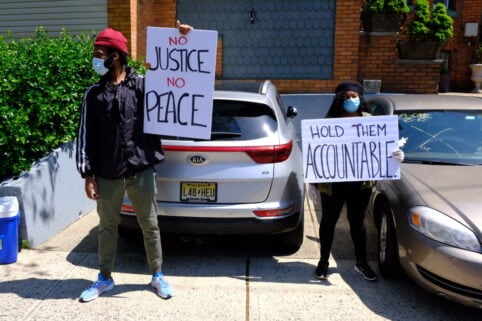 Council members Denise Ridley and James Solomon will jointly introduce an ordinance to form a Civilian Complaint Review Board (CCRB) at the City Council meeting on February 24th.

The purpose of a CCRB is to investigate allegations of police misconduct.

Calls for a CCRB grew louder following a May, 2020 melee between police and civilians on Bostwick Avenue. In that case, the Hudson County prosecutor cleared the police of wrongdoing over the objections of neighborhood activists who claimed that the police had used excessive force.

If passed by the City Council, the CCRB would go into effect only after the New Jersey Legislature passes legislation drafted by Assemblywoman Angela McKnight.

In August, the New Jersey Supreme Court struck down Newark’s CCRB. Newark has appealed that decision to the United States Supreme Court. Last month, the city council voted to file a “friend of the court” brief supporting Newark’s position.

If enacted, Jersey City’s CCRB would be made up of 11 members; five from community organizations, the three at-large city council members and a representative from each ward.

The board would make recommendations to the Director of Public Safety who, in turn, would have to explain any discipline decision that differs from the CCRB’s recommendation.

New York City — which has had a CCRB since 1953 — has had mixed success. In November, The New York Times found that the police department “regularly ignored the board’s recommendations, overruled them or downgraded the punishments.”

Councilwoman Ridley is undeterred: “I believe that government works best when it is responsive to the requests of residents. The City is actively taking steps to better the relationship between our police department and the community. A CCRB is a step that gives both civilians and police an additional avenue to address complaints in a transparent way. Establishing the groundwork for a CCRB in Jersey City shows that we are committed to growing and improving systems in an effort to increase communication and trust.”

Councilman Solomon added, “On the heels of the appointment of Jersey City’s first civilian Police Director, a strong, independent CCRB would guarantee the accountability and transparency Jersey City residents rightfully ask from their police department. Instead of the police investigating the police, trusted community members will provide impartial review of allegations of impropriety and release the findings of their investigations, building trust between our officers and the community.”

“I commend Councilwoman Ridley and Councilman Solomon and all of the stakeholders in Jersey City who are pushing forward for a civilian review board in our community,” says Assemblywoman Angela McKnight (D-Hudson County). “I am pleased to advocate at the state level on behalf of them, and all of the other leaders of municipalities throughout the state who have remained committed to having a CCRB. We must pass legislation that ensures that these local governing bodies have a framework in place that will truly increase transparency and accountability between law enforcement agencies and the people they serve.” 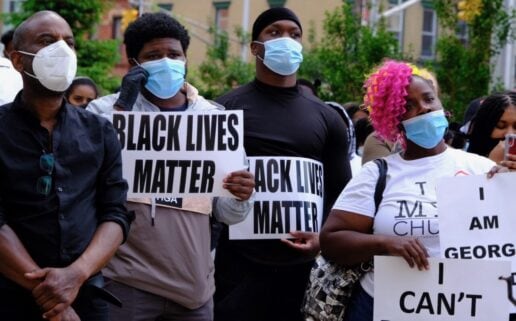 In a Facebook post this morning, Mayor Steven Fulop came out in favor of state legislation that would enable the creation of civilian complaint review boards with subpoena power to investigate police misconduct.  Just last week, the New Jersey Supreme Court held that under current law, such boards cannot be invested with subpoena power. Jersey City councilman James Solomon and community groups have called for creation of a civilian complaint review board in the wake of a melee on Bostwick Avenue earlier this year and the killing of George Floyd in Minneapolis.

“I do feel there should be a Civilian Review Board of police departments that has subpoena powers and can provide responsible oversight. I’m asking the Governor/State Legislature to amend the state law to allow this. The reality is that if an individual is allowed to have the significant powers of policing that include carrying a gun, sirens on a car, and enforcing the laws – then they should be subject to move accountability and not less. In NJ we have a patch work of laws that hides accountability/visibility in police departments and this needs to change.” 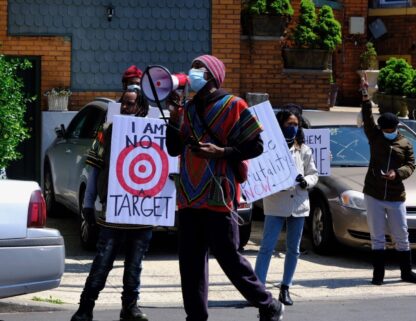 “He bugging, he bugging …” Those are the words of an unidentified man videotaping last Tuesday’s street melee on Bostwick Avenue.  The man’s play-by-play would almost be humorous (“He hurt coach, take him take him out of the game”) if we weren’t watching something so troubling.

The video begins with a fistfight on the street between what appears to be two to four people. A crowd of ten to twenty people surrounds the fighters and, after a lot of yelling and pushing, successfully breaks them up. The hubbub dies down. The crowd begins to disperse. It looks like life is returning to normal on Bostwick Avenue.

The crowd is largely gone when the police arrive in a patrol car. Inexplicably, the video then stops. A second video then shows a police officer running after a black man in tan pants. The man attempts to run up the stairs to one of the houses and the officer grabs the man from behind. A second man comes from behind the officer and tries to pull him off the man in tan pants. A man next to them sitting on a chair gets knocked to the ground. A second officer goes to the aid of his colleague wrestling with the man in tan pants. More cops and civilians descend on the brawl. One cop gets knocked down and is seen wrestling with a civilian on the sidewalk. Some officers can be seen trying to separate people.

Enter a dark-haired police officer with sunglasses. Armed with a whip-like baton, he unleashes a savage beating on several men lying on the sidewalk. At least one is not moving and clearly posing no threat to anyone. The baton-armed officer is indeed “bugging.” By the end of the altercation, at least two men can be seen lying on the sidewalk on Bostwick Avenue, handcuffed and in physical distress.

Here’s what we know from analyzing the videos. First, by the time the police arrived it appears that the street fight was over. The people in the neighborhood had apparently broken it up, and the combatants had been separated. Second, violence broke out a second time after the police arrived — but this time only between police officers and civilians, not between civilians themselves. Third, while many officers appeared to have acted appropriately, at a minimum the force applied by the dark-haired officer with sunglasses was excessive.

In the wake of the incident, activists Chris Gadsen and Frank Gilmore alleged that the police used excessive force and called for the creation of a civilian complaint review board to investigate abuses. Police Chief Michael Kelly, on the other hand, said the police had acted appropriately and with “great restraint.” Carmine Disbrow, president of the Jersey City Police Officer’s Benevolent Association, said that “police lives were at risk” and that the violence was “precipitated by individuals who are more committed to creating chaos than by abiding to even the most basic of community standards.” On Sunday, a group of protesters marched from Berry Lane Park to the police department’s Greenville District and held a raucous protest.

The police department claims that pepper spray and batons were used only after one individual reached for an officer’s duty belt. From the videos available to the public however, it’s impossible to verify that assertion. One hopes that it is true, but without the body camera video of the initial interaction between the man in tan pants and the officer who pursued him, it will be impossible to know for sure how the encounter turned violent.

None of this is to say that cops don’t have a tough job. They do. Every Jersey City resident has an interest in the safety and success of our police.  Civilians, no matter how aggrieved, should not resist arrest nor intervene when an arrest is taking place.   The job of challenging what is perceived to be improper police conduct must be left to lawyers. But, similarly, it is vital that the police nurture a relationship of trust with those they police. Whether better “community policing” might have helped in this instance, we’ll never know. Suffice it to say, the videos show an unsustainable level of distrust between the police and the Greenville community.

A transparent investigation that includes witness interviews and disclosure of all body camera videos is required. Moreover, even if the belt-grabbing allegation is proven to be true, the police department will still have to explain how the baton-wielding officer’s actions were appropriate and if they weren’t what discipline the officer will face. The burden will be on the police department to demonstrate that it can credibly investigate itself. If this incident shows that it can’t, it will be time to create a civilian complaint review board.