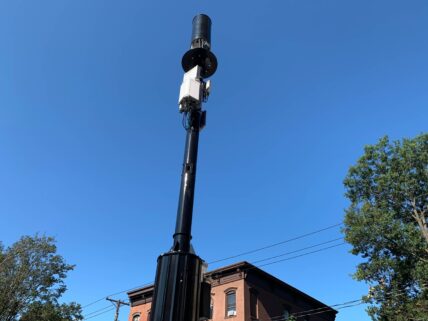 In today’s Wall Street Journal, tech writer Joanna Stern reports that Verizon’s 5G Ultra Wideband network in Jersey City, which is still in prelaunch testing, can consistently download data at 1,300 megabits per second. Stern called the speed “bananas.” According to internet speed-test company Ookla, Stern goes on, this is 32 times faster than the average 4G speed currently in use. However, Stern reported that these speeds can slow quickly, depending on location and the network you use.

The rollout of 5G in Jersey City has been controversial to say the least. In May, the city council voted to allow Cross River Fiber LLC (of ZenFi Networks) the right to install 5G telecommunications utility poles and to upgrade existing 5G poles throughout Jersey City for its client AT&T. Councilman Richard Boggiano objected vociferously. “All anybody has to do is go on Google and look at scientists that say (5G) can cause danger to people,” Boggiano said. “There are many scientists that disagree totally with the FCC. I think it’s a disgrace that we have to go along with this.” And, indeed, Stern found graffiti on one 5G pole which said “5G FOR UR BRAIN FRY.” A Verizon technician reported to her that he has been harassed by local residents. However, a lengthy July article on tech website CNET assessing the state of the science concludes that “according to expert agencies and the studies conducted so far, there’s nothing to suggest 5G millimeter wave is a significant health risk. But most experts say more quality research is needed.”

Sadly, for most of us the subject is still largely academic. Few 5G compatible phones are on the market and, if you’re an Apple user, you’re completely out of luck. Apple has yet to release one, although one is expected in the Fall.