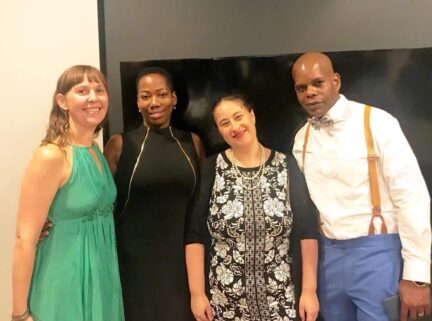 For Women’s History Month, the Jersey City Times shines a spotlight on Amy Albert, founder and director of Haven Adolescent Community Respite Center, a drop-in locale where Albert and her staff of social workers, counselors and volunteers teach and mentor at-risk children. 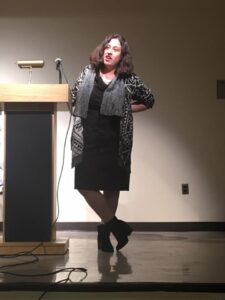 In a clapboard two-family house in Jersey City known as Haven Respite, founder Amy Albert writes grants and designs programs to save children from falling through the proverbial rabbit hole. It was 2015 when Albert, a public defender and criminal defense attorney with 18 years’ experience, opened the nonprofit’s doors in response to the parade of children and teens he represented who were charged with minor offenses.

“I’ve represented kids in criminal and juvenile courts in Massachusetts, New York and New Jersey,” Albert says, taking a short break in Haven Respite’s first-floor kitchen. “During the first part of my career in the courtroom representing kids, I started seeing a pattern: The kid would come in because they hit their brother, ran away, were pushed out or stole food, stuff that was more about family tension than it was about crime.”

Albert’s team oversees daytime services for teens in juvenile detention, a young mom’s support group, and an LGBTQ+ support group for kids 14 and under. After-school mentors help children with homework, and counselors teach everyday skills such as how to open a bank account and do laundry. Two volunteers take kids out for weekly one-mile runs.

A popular workshop, Albert says, is “Cook, Eat, Talk,” where children share what’s on their minds while they learn to cook a meal together.

“There’s incredible food insecurity in Jersey City,” Albert says. “Our kids are starving. We have kids not really living at home. They run away or  get kicked out, and they’re afraid to impose when sleeping on someone’s couch, so they don’t eat too much. Cooking creates community. It’s a great life skill and an easy one. ‘Hey mom, I can make the eggs today’. We do pizza, omelets, salads, stuff that’s easy enough that a kid can do by themselves. Kids are resilient. It’s not rocket science.”

In April, Albert will bring Cook, Eat, Talk to the Curries Woods housing project where the team will conduct life-skills workshops in addition to cook together.

Haven Respite offers a day-services program for children who are in juvenile detention. They spend up to 20 hours a week with counselors who help them with homework, coach sports and teach them about nutrition. Children are encouraged to pick a skill that they’re going to work on, and in return the kids gain both competence and confidence, Albert says.

Albert’s team also counsels parents. Social workers meet one on one with parents and discuss things like whom to call in an emergency, mindfulness techniques, how to resolve conflicts, and how to differentiate their personal issues from the issues of their children.

“It’s teaching kids how to take care of themselves,” Albert says. “We’re not trying to replace kids’ parents. Instead, we’re trying to teach both young kids and their parents skills so they can communicate better.” 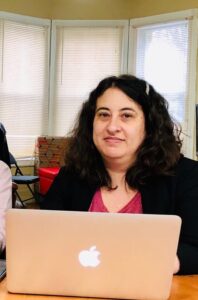 Albert writes grants to get funding for Haven Respite’s programs and receives financial support from individual donors as well as the Jersey City Municipal Alliance and the Jersey City Department of Health and Human Services. She held a gala at the Factory restaurant in Bergen-Lafayette recently that raised $50,000. One of the honorees was Freeholder Bill O’Dea.

“Amy’s program is one that we are in dire need of,” Freeholder O’Dea said. “She has an amazing passion for helping and protecting our young people. I am proud to support her program.”

Ward B Councilwoman Mira Prinz-Arey also supports Albert’s mission along with other members of the city council and the school board including Jersey City School Superintendent Franklin Walker. Together, Walker and Albert have teamed up to design a “catch-up” program to help kids who have trouble progressing from eighth and ninth grades.

“We are working with Superintendent Walker on academic programming,” Albert says. “We’d like to provide an opportunity for them to have a smaller setting where they can address their underlying issues and catch up.”

When asked if there are any children who moved on from the Haven Respite programs, Albert talks about two brothers who came to the center when it first opened. The older brother was disabled, and the younger brother, who was failing in school, would often leave home without permission. No one was paying attention to him, according to Albert.

“He came here for a number of years,” she says. “He then joined the National Guard, was sent overseas, and came home safe. Now he’s at Rutgers in New Brunswick, having his college education paid for by the National Guard. The older one graduated from high school and goes to community college.